No aspect of the current Western Wall plaza arrangement, in which the Orthodox maintain a monopoly, will change if other denominations are allowed to pray at the foot of the Temple Mount in a new plaza. 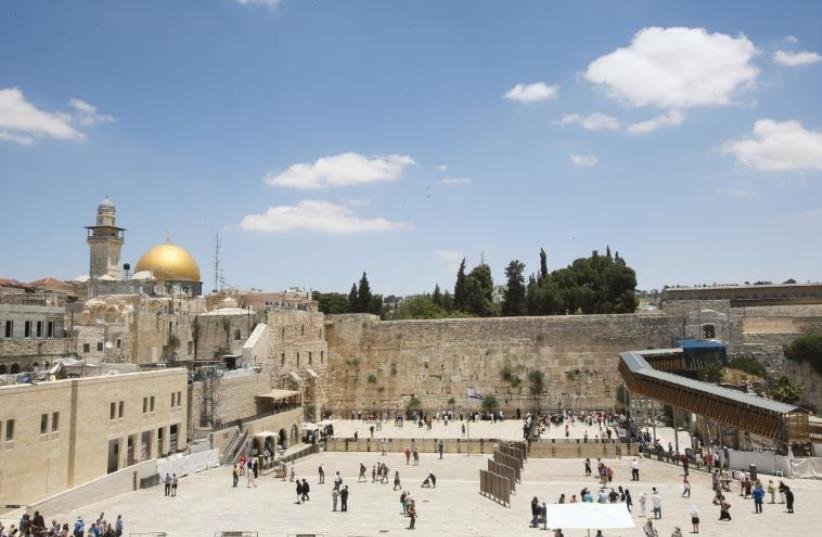 Western Wall
(photo credit: MARC ISRAEL SELLEM)
Advertisement
In the wake of the ultra-Orthodox rejection of the proposal to establish a new prayer space south of the Western Wall plaza for use by non-Orthodox denominations, Prime Minister Benjamin Netanyahu finds himself forced to make a dangerous decision. On the one hand, if he pushes ahead with the new prayer space, he will imperil his political partnership with the ultra-Orthodox. On the other hand, if he refuses to create the new prayer space, he will disrupt the partnership between the State of Israel and large segments of Diaspora Jewry. Netanyahu is caught between a rock and a hard place.Why do the ultra-Orthodox oppose the establishment of a designated prayer space for the non-Orthodox denominations? The compromise that has been proposed would seem to be a classic example of the Mihsnaic principle that “one party benefits while the other experiences no loss.”No aspect of the current Western Wall plaza arrangement, in which the Orthodox maintain a monopoly, will change if other denominations are allowed to pray at the foot of the Temple Mount in a new plaza.Rather, the answer lies in the symbolic meaning behind any new prayer space arrangement. Establishing an official non-Orthodox prayer space at the foot of the Temple Mount alongside the current plaza, using public funds, would represent a giant first step toward official recognition of non-Orthodox denominations in Israel. These religious streams would transform from outcasts into equal partners at the holiest site to the Jewish people. As time passes, more and more Israelis might even come to prefer the southern option, because this is where men and women will be able to face God together.How ironic it is that Netanyahu, a secular prime minister, is currently caught in the crossfire between two religious groups.Netanyahu, a most American Israeli, is being forced to undermine the American Jewish base of support for Israel. Netanyahu, a pragmatist, is confronted by two rivals motivated by symbolism – and not by the search for a practical solution. This war of symbolic gestures is a zero-sum game; if one side gains, the other suffers.We can assume the prime minister will try to walk between the raindrops by taking steps (such as establishing another committee) that postpone a resolution, while compensating both sides with doublespeak. It is also safe to say this issue will spill over into the courts. Judges will be asked to pull the chestnuts out of the fire and rule on questions that are not even legal in nature but, rather, relate to the core of Israeli identity.The odds are that Netanyahu’s savvy politician’s survival instinct will lead him to seek a way out without having to actually make a decision.However, a national leader needs to know how to steer his or her country toward defined national goals – and not just be dragged toward them. The current dispute is an opportunity for the prime minister – and all of us – to fairly and with all due sensitivity take steps toward resolving the issue of our relations with an important minority group, the ultra-Orthodox.The time has come to define the ground rules for their relationship with the rest of Israeli society.As such, we must on the one hand guarantee the ultra-Orthodox the ability to cultivate and develop their unique culture without coercion by the state. The state must refrain from imposing its liberal preferences; it may even have the obligation to fund the costs of sustaining “pure” ultra-Orthodox Judaism.On the other hand, we must oppose any meddling in the public domain by ultra-Orthodox that impose their beliefs and lifestyle on others. The extent to which the state respects the ultra-Orthodox lifestyle and supports its adherents as a cultural minority must be equal to the demands made of the ultra-Orthodox to respect the preferences of the majority and refrain from religious coercion.It is all together appropriate that we reach out to the ultra-Orthodox – so long as we are speaking about arrangements that affect their own lifestyle. Hence, we should proceed with great caution when instituting coercive policies regarding school curricula, military service, higher education, and more. At the same time, we should not give an inch to the ultra-Orthodox when the disagreement relates to society at large, and not just to their own community. We must thwart their ambition to control public agencies such as those pertaining to conversion, kosher supervision and personal-status laws.Similarly, we must forcefully oppose the veto they would impose on the ability of non-Orthodox denominations to pray as they wish in the new space. The time has come for the Jewish and democratic State of Israel to permit Reform and Conservative Jews to enjoy full religious freedom and support them financially.In the Proclamation of Independence, we declared that the State of Israel “will guarantee freedom of religion... [and] will safeguard the Holy Places.” We are today in violation of this commitment – which we made to ourselves and the international community – so long as the State of Israel does not allow each person to worship at the foot of the Temple Mount as he or she wishes. This is the solution demanded by the fundamental ethical duty to respect others’ beliefs and respond to their spiritual needs. The proposed compromise of a prayer space on the Southern Wall should therefore be implemented.The author is vice president of research at the Israel Democracy Institute.