What’s next after the Trump Middle East trip?

Anyone who demands Israel accept an imposed peace plan must recognize the fragility of the Jordanian and Egyptian governments. 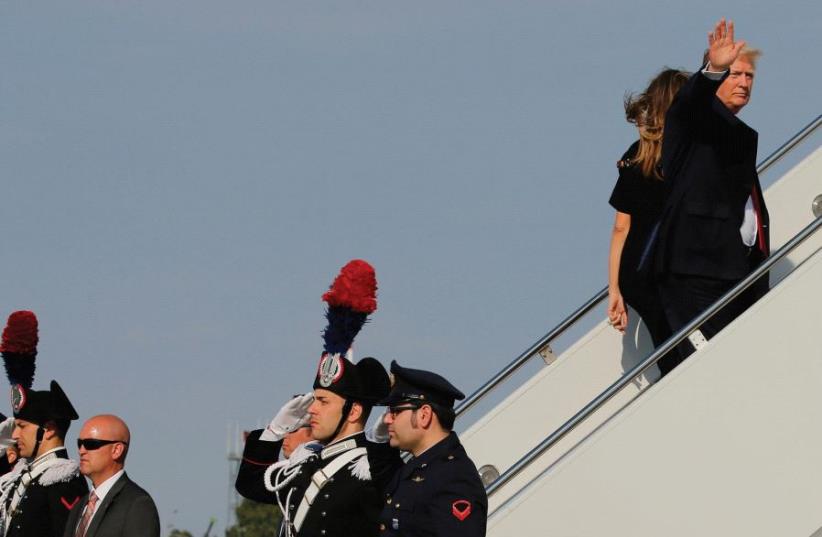 US PRESIDENT Donald Trump boards a plane to head home after a speech in Sicily
(photo credit: REUTERS)
Advertisement
American perception is not reality in the Middle East.A friend of mine keeps telling me that the “cold peace” with Jordan and Egypt is the model and proof that Israel can achieve a sustainable peace with the Palestinians; even if the enemy still believes you have no legitimate right to exist.He says the benefits to Israel will accrue if Israel is territorially generous, even if the Palestinians teach their children that Israelis are interlopers and infidels who have no rights to any part of the land.Idealists like my friend are unfazed by critiques that point out that to contemporary Muslims, any land once controlled by Islam, the land of Wakf, can never rightfully belong to non-Muslims.Can conservative and Wahhabi Sunni states courted by US President Donald Trump accept a Jewish state? According to Prof. Ephraim Inbar, founding director of the Begin-Sadat Center for Strategic Studies, “the [Palestinian Authority] cannot conclude a ‘cold peace’ like Egypt or Jordan. Those two countries take their commitment seriously to prevent terrorism from their territory...“In the West Bank, the PA... encourages terror by subsidies to jailed terrorists and by innumerable steps to eulogize the martyrs.”Idealistic dovish organizations claim that the majority of Palestinians want a two-state solution. That is true if that is the only question you poll. They claim that Palestinian Arabs have no desires beyond the “green line.”Yet those same Palestinians, when polled by Palestinian pollsters, reveal a much more troubling result. To the overwhelming majority of Palestinians, a two-state solution includes the unlimited right of return of Palestinian refugees to Israel, while a return to the ‘67 lines is not considered an acceptable solution. In other words, we are talking about 1948, not 1967, the goal being the effective destruction of Israel.It is true that the Egyptian peace agreement has held for 40 years, even under trying circumstances, including the assassination of Anwar Sadat, and the rise of the Muslim Brotherhood in the aftermath of the Arab Winter.Many people believe the final resolution of the conflict is clearly known, that it will be along the lines of the Clinton parameters of 2000. The Gulf States just need to be convinced to provide cover for the Palestinians, and if necessary pressure the parties to accept the resolution.This is the “outside-in strategy.”But with a $400 billion economic package negotiated with the Saudis, $110b. in military deals, will US National Security Advisor H.R. McMaster and Secretary of State Rex Tillerson tilt toward the Saudi perspective? Remember, the hard-fought 10-year US-Israeli military deal is dwarfed by the Saudi deal, $3.8b. vs. $110b.When I inquire about the stability of an agreement with an Arab world that venomously hates Jews, not just Israelis, and with Hamas waiting in the wings to take over the West Bank the moment Israel leaves security control to the PA, I’m told it doesn’t matter.The response is that Israel is so militarily superior that it can retake the West Bank in days with the world’s support if missiles start flying into Ben Gurion Airport from Ramallah.When confronted with the current chaos in the Arab world, I am told this is not a problem, but an Israeli opportunity, because this is evidence that the Arabs have never been weaker and Israel never stronger.I am also told that if authoritarian Arab leaders make a deal with Israel, their populace’s Jewish hatred is irrelevant, as they will go along with any agreement.Memo to my idealistic friends: remember the list of authoritarian dictators overthrown by their citizens during the Arab Winter, who just months earlier were deemed secure by American intelligence.When I ask my friend about the failed experience of the Israeli withdrawal in Gaza and the likelihood of a Hamas takeover in Judea and Samaria, Abbas’s explanation that the failure of the Gaza withdrawal was Israel’s fault for not coordinating it with the PA is recited.When challenged with Israel’s international legal rights over the ‘49 armistice line, I am told that even if Israel has those rights, they are irrelevant because the international community and UNSC Resolution 2334 have made them irrelevant.When confronted with the facts, that UNSC Resolution 2334 is a non-binding resolution and UNSC resolution 242 is still the prevailing document on the conflict confirming the green line artifactual, it does not move them.The historical record of Sunni Arab animosity to Israel’s existence is discounted as my friend tells me the Gulf States are working with Israel behind the scenes against their common enemy, the Iranians. This is true but it confuses the difference between temporary shared interests and a real desire to end the state of war, which is continually reinforced by their conservative Islamism.Is a Trump administration able to thread the needle of reconciliation between conservative Gulf States and Israel, where others have failed? An insight into the challenge any American initiative into the conflict will confront is best represented by a recent but illustrative diplomatic incident between Israel and Jordan. Israel’s erstwhile peace partner called Israel’s killing of a Jordanian terrorist in Jerusalem a “heinous crime.”When your Sunni “friends” escalate instead of downplaying incidents like this, the long-term sustainability of any signed agreement appears doubtful.Anyone who demands Israel accept an imposed peace plan must recognize the fragility of the Jordanian and Egyptian governments and their limited prospects as partners in peace with their neighbors and even with factions within their own borders.Is Trump, the ultimate negotiator, willing to walk away from a Saudi proposed deal, if the only available deal turns out to be one that would seriously endanger Israel? The author is director of MEPIN™, the Middle East Political and Information Network™. He regularly briefs members of Congress and think tanks on the Middle East. He is a regular contributor to The Jerusalem Post.