Breaking news
(photo credit: JPOST STAFF)
The tragic event of Prime Minister Yitzhak Rabin’s assassination was an event that rocked the country, and placed it in a deep state of shock. This inspired Israeli artists with an outpouring of commemorations, but none quite as unique as the classical choral work "Lament for Yitzhak", by of Israeli composer Dov Seltzer. 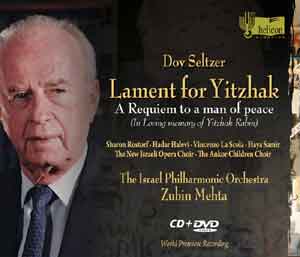 Rabin memorial CD
What better way to honor the 15th anniversary of this great man death than with the debut recording of this work on CD and DVD. This world premier was recorded at the opening night concert for the 50th Israeli Independence Day celebrations on 27 April 1998. Conducted by Zubin Mehta at the Mann Auditorium this was performed by the Israel Philharmonic Orchestra, with the New Israeli Opera Chorus, the Ankor Children’s Choir and four soloists: Sharon Rostorf, soprano; Hadar Halevi, mezzo-soprano; Vincenzo La Scola, tenor, and; Haya Samir, folk singer. Also known as “A Requiem for a Man of Peace” the text and music faithfully reflects Yitzhak Rabin’s life work and direction, in addition to his tragic death. This is a scathing statement against violence and war and an anthem of peace, love and understanding between peoples. Although a prayer of remembrance, the "Lament" is not a religious work. Despite some of the texts having been taken from Jewish prayers, it still has a secular character to it. Texts included here come from the Bible, a song dedicated to peace and written by a 12 year old Israeli girl, Jewish poetry from Spain of the Middle Ages and you will also hear taped excerpts from Yitzhak Rabin's last speech, as well as other of his speeches. Since traditional Jewish funeral prayers have nothing to correspond to a Requiem, the five parts of this creative musical piece were adapted from a basic Christian Requiem, while removing any content that refers to Christian ideology. The Jewish prayers included in the piece parallel Requiem Masses that can be found throughout many different periods, which also shows how Christian liturgy was probably inspired by Jewish prayers.The five movements of the work are:El Maleh Rahamim - Merciful God (equivalent to KYRIE ELEISON)
Yom HaDin - Day of Reckoning (DIES IRAE)
Hallel - Praise: (GLORIA)
Kinah – Lament (LACRIMOSA)
Ya’aseh Shalom – He Who Makes Peace (DONA NOBIS PACEM)This work was also performed in July of 1999 at the Lincoln Center Festival in New York by the New York Philharmonic Orchestra, with the Philadelphia Chorale Choir and the Harlem Boys Choir under the baton of Maestro Kurt Masur. At the conclusion of this performance, the audience gave the work a standing ovation.  Most recently, a performance of the work took place in Rome in November 2009 with the Italian Symphony Orchestra, the children's choir of St. Cecilia and the National Academy Choir of St. Cecilia conducted by Maestro Lorin Maazel.Seltzer’s “Lament for Yitzhak” is available now on CD and DVD and is the perfect tribute to this great man as well as being a beautiful example of Israeli classical choral music.
For orders visit: www.israel-catalog.com   Or call Toll-FREE:
USA & Canada: 1-855-ISRAEL1 (1-855-477-2351)
U.K. & Northern Ireland: 0-800-028-7172
Australia: 1-800-035-639Israel: +972-8-9153696Additional links:
Israeli music collections
Israeli groups & bands
Israeli female singers
Israeli male singers