WATCH: Mother of kidnapped youth, 'We just want to embrace our children'

Families of abducted Israeli teens meet for first time since kidnapping; PM tells parents everything being done to locate their sons.

By TOVAH LAZAROFF
JUNE 17, 2014 13:48
Families of missing teens
(photo credit: TOVAH LAZAROFF)
Video: Tovah Lazaroff
“We love you. We miss you. Please be strong. Hold on,” the families of the three teens kidnapped in the West Bank said to their sons, in a message they delivered in front of television cameras.Naftali Fraenkel, 16, Gil-Ad Shaer, 16, and Eyal Yifrach, 19, were abducted from a hitchhiking post in the Gush Etzion region late Thursday night while traveling home from school.On Tuesday morning, their parents met for the first time at the Fraenkel home in Nof Ayalon.They sat together for three hours. Then they walked out together onto the small suburban street, which was packed with cameras. 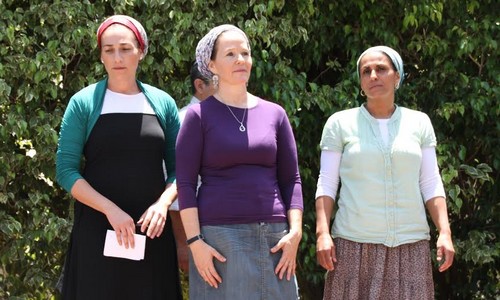 parentsAs the sun beat down on their heads, Fraenkel’s mother, Rachel, spoke on behalf of the families.“We love you, we want to hug you again,” she said of her son and the two other teens. 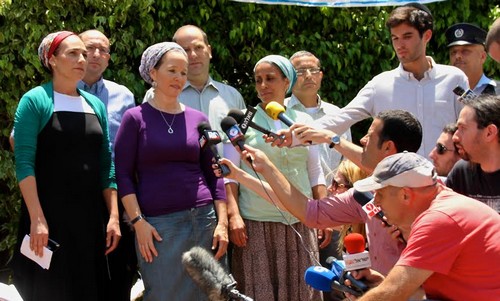 momsShe said that the visit with the other families “was a very emotional meeting, very significant. We met good, strong, God-fearing people.”She added: “We are trying from here to send strength to everyone who is involved in this effort, to the soldiers, to the government, to the prime minister, [who] is in touch with us. We pray that everyone involved, the soldiers and our children, will come home [unharmed].”She said the families were “full of thanks for everyone involved. It is very important for us to say, these days we feel a tremendous [embrace] of love and support from all over. People send us so much prayer and love and good energy. It keeps us strong.”Rachel Fraenkel requested “that everyone continue praying. Continue all the good deeds, just pass it on.”Prime Minister Binyamin Netanyahu spoke with the parents while they met and assured them that every effort was being made to locate their sons. He told them that Israel was employing intensive operational and intelligence measures to that end.“In the name of the people of Israel, I want to give you strength,” he said.