It may sound odd to go indoors to see a museum while traveling the Holy Land, but some museums you can only see in Israel.

By WAYNE STILES
Israel Museum 370
(photo credit: BiblePlaces.com)
Advertisement
Wayne Stiles has never recovered from his travels in the Holy Land. Follow him on Twitter (@WayneStiles) or on his blog at www.waynestiles.com.The Israel Museum in Jerusalem recently reopened after many years and millions of dollars in renovation. You may not be a “museum person,” but this one has stuff in it you should see. Especially if you have an interest in the Bible. While I could mention dozens of objects in the museum, I’m reducing it down to seven. Here are seven must-sees in the Israel Museum and—most importantly—why you should care. 1.  Ketef Hinnom Amulets These two small silver scrolls have the priestly benediction Numbers 6:24-26 etched on them. They date to the First Temple Period (586 BC) and represent the earliest copy of Scripture we have. 2.  Tel Dan Inscription Archaeologists unearthed fragments of a large, basalt stele that boasted of the Aramean King Hazael’s victory over Israel (2 Kings 8:12-13) and the “House of David.” This represents the only text outside of the Bible that refers to David. This is huge. 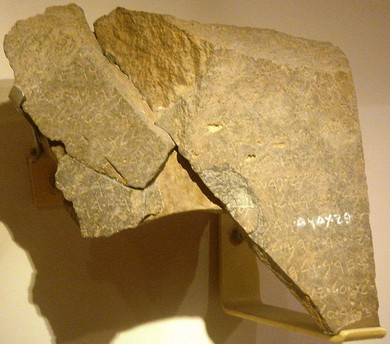 Tel dan inscription (Wikimedia commons)
3.  Sennacherib's Prism This clay prism details Sennacherib’s boastful triumph over cities of Judah. The prism mentions the siege on Jerusalem and Hezekiah being made “a prisoner, like a bird in a cage.” Though it fails to mention that the Lord destroyed Sennacherib’s army (2 Chronicles 32:21). 4.  Heel Bone of Crucified ManThe Romans crucified thousands of people, but this heel bone with a spike still penetrating it represents the only archaeological evidence for the practice. 5.  Trumpeting Inscription from the Temple MountThe inscription found in the rubble at the southwest corner of the Temple Mount noted the place where the priest would stand and blow the trumpet to announce the Sabbath and holidays during the Second Temple period.

Trumpeting Inscription(Wikimedia commons)
6.  Pilate InscriptionAn Italian team discovered this inscription at the Caesarea theater in 1961. The large stone referred to “Pontius Pilate, Prefect of Judaea.” Pilate was the Roman governor who condemned Jesus to death (Matthew 27:22). 7.  Caiaphas OssuaryThis ornate ossuary (bone box), discovered in Jerusalem, is that of Joseph Caiaphas, the high priest involved in the trials of Jesus (Matthew 26:57).Admittedly, I haven’t come close to mentioning all of the key finds in the museum that connect to the Bible, including the Epitaph of King Uzziah and the altar at Tel Beersheba—not to mention the Dead Sea Scrolls! If you’re not in the Jerusalem area, a book might be cheaper than a plane ticket. The museum’s recent volume, Chronicles of the Land: Archaeology in The Israel Museum Jerusalem, contains many excellent photographs of the artifacts (which is great because when you visit the museum, you can’t take any pictures). “It is extremely rare to discover archeological finds relating directly to historical personages. Thus the discovery of two items relating directly to important figures associated with the arrest, trial, and crucifixion of Jesus is truly exceptional” (Chronicles of the Land: Archaeology in The Israel Museum Jerusalem, page 120). [The quote refers to the Caiaphas ossuary and the Pilate Inscription.]So, why see these seven finds? These bits of wood, metal, stone, and bone may seem like relics of ancient, irrelevant events. But they affirm that the biblical faith of Jews and Christians stems from historical events and not from mythology, mystery, or legend. The Jews point to the historical events of Abraham and David as the basis of their claim to the land of Israel and to Jerusalem (Genesis 12:1-2; 2 Samuel 7:16). Christians point to the historical events of Jesus’ death, burial, and resurrection at Jerusalem as the basis of their faith (1 Corinthians 15:14). Without history, faith is absolutely futile—because it isn’t real. The Bible isn’t a history book, but what it says about history is true. Archaeology supports that history. That’s a great reason to visit the Israel Museum. Wayne Stiles has never recovered from his travels in the Holy Land. Follow him on Twitter (@WayneStiles) or on his blog at www.waynestiles.com.Follow @JPost_Lifestyle
Advertisement
Hot Opinion