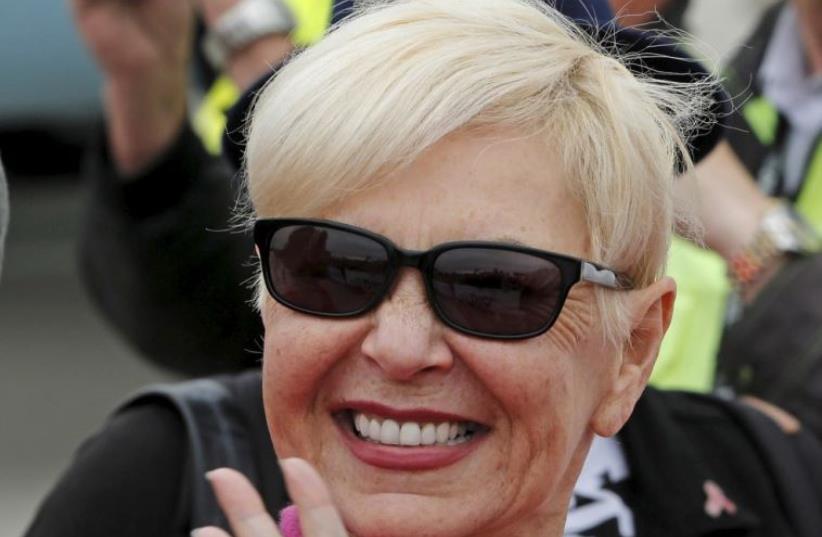 Actress Roseanne Barr poses upon her arrival for the Life Ball at the airport in Vienna
(photo credit: REUTERS)
Advertisement
Jewish actress/comedian Roseanne Barr repeatedly slammed Hillary Clinton on Twitter, saying Clinton “will be the absolute death of Israel.”Barr posted numerous inflammatory remarks, videos and articles about the Democratic presidential nominee this week, including one that refers to her as “Hitlery Clinton” and another that labels her “anti-Semitic Hillary.”On Friday alone, Barr tweeted and re-tweeted several posts about Clinton and her aide Huma Abedin, whom Barr labeled “a filthy nazi whore.” A Muslim American, Abedin is married to former Democratic congressman Anthony Weiner, is Jewish.

hillary clinton is surrounded by jew haters who make fun of the holocaust & jewish suffering yet her mkultra supporters call Trump a bigot!

On Wednesday, Barr tweeted: “Hillary will be the absolute death of Israel-she will sell #nukes to Hamas next if price is right [sic]. She listens to Sid Paul and Max Blumenthal,” she wrote, referring to former Clinton advisor Sidney Blumenthal, and his two sons Max, an avowed anti-Zionist, and Paul, a journalist.

Barr, who starred in the long-running sitcom “Roseanne,” has been outspoken in her support for Israel in recent years. She visited the Jewish state in May, where she was a keynote speaker at a Jerusalem conference on the anti-Israel Boycott, Divestment and Sanctions movement.In 2012, Barr sought the presidential nomination of the Green Party, but lost to Jill Stein, the party’s current presidential candidate.The comedian, who frequently posts on Twitter, is an outspoken critic of the pro-Palestinian left and BDS. She has even called Jews who support BDS “anti-Semites” and recently retweeted a post from JTA’s partner website Jewniverse noting that the Bataclan, the Paris nightclub where at least 130 people were killed in a recent attack, was named for a 19th-century Jewish operetta.