Demonstrators burn leaflets and American flag during protest outside the Wells Fargo Center in Philadelphia. 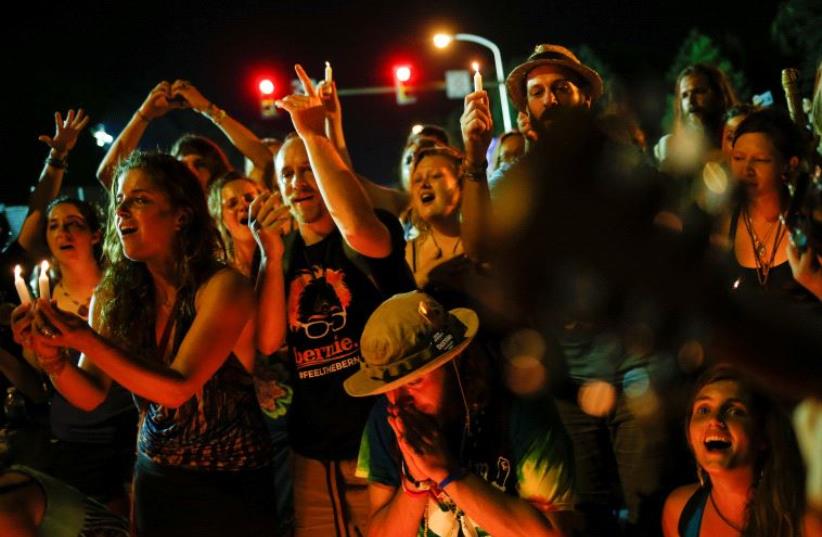 An activist looks toward a guitar as she and others sing during a candle light vigil on the perimeters of the 2016 Democratic National Convention in Philadelphia, Pennsylvania, July 26, 2016
(photo credit: REUTERS)
Advertisement
Left-wing protesters demonstrating outside of the Democratic National Convention in Philadelphia on Tuesday night torched Israeli and American flags amid chants of "intifada!" and "go home, F*** Hillary!"Wall Street Journal reporter Byron Tau tweeted images from the scene along with video of the demonstrators igniting a number of pro-Bernie Sanders posters placed on the fence outside the convention venue at the the Wells Fargo Center.

Protesters are burning an Israeli flag now in front of the secure perimeter and chanting "intifada" pic.twitter.com/6YfGHBhR6z

Various protesters were seen brandishing posters in support of the Vermont senator, who failed to clinch the Democratic presidential nomination.  Another demonstrator was seen with a poster that read "Hillary hates democracy."

A number of protesters have light signs on fire along the security perimeter. pic.twitter.com/J8d2RE8QRN

Other social media posts showed activists burning a US flag on the street at the scene. US media reported that nearly 2,000 demonstrators, predominantly supporters of Sanders, marched on the convention to vent their anger over recent controversies that have embroiled the Democratic party. Fox News reported that police had detained dozens of people, however authorities said no arrests were made, but more than 50 people were cited for disorderly conduct. During the convention on Tuesday night, Hillary Clinton officially secured the Democratic nomination in the 2016 White House run. The Democratic party faced an internal crisis this week after a massive data breach on its national leadership was revealed.A hack of the Democratic National Committee and leak of over 20,000 emails has already claimed the scalp of the party’s chairwoman, Debbie Wasserman Schultz of Florida, who was compelled to resign on Sunday. The leak revealed bias among top DNC brass toward Clinton during her primary fight against Sanders. Between anger from Sanders’s supporters over the e-mail leak and Republican nominee Donald Trump’s bump in polls, Clinton faced assault from both sides of the political aisle. Michael Wilner contributed to this report.
Advertisement
Hot Opinion