Trump: 'Obama and Clinton are co-founders of ISIS'

It is not the first time the GOP nominee has attempted to link Clinton to ISIS, with Trump saying that she “should get an award from them as the founder of ISIS” at a campaign rally last week. 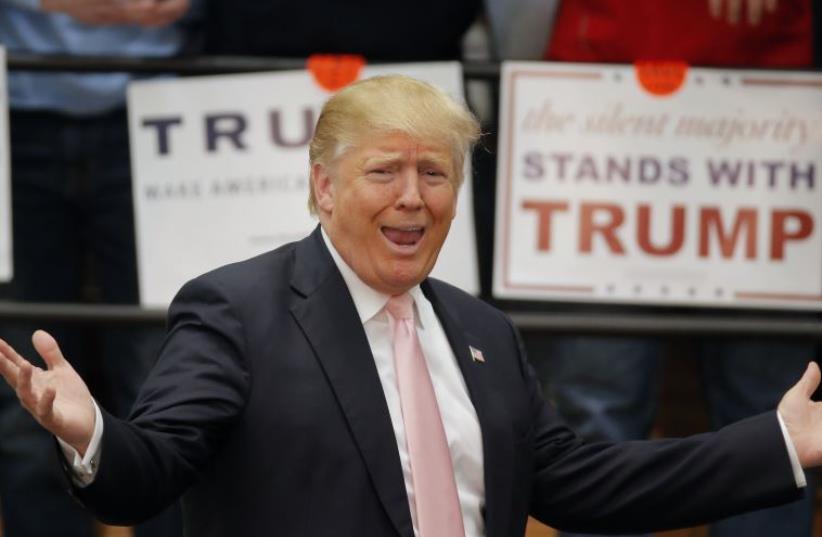 US Republican presidential candidate Donald Trump reacts to supporters as he arrives to a campaign event in Radford, Virginia
(photo credit: REUTERS)
Advertisement
Republican presidential candidate Donald Trump on Wednesday accused US President Barack Obama of being the "founder" of extremist terrorist organization Islamic State, according to The Guardian newspaper.“ISIS is honoring President Obama... He is the founder of ISIS," Trump said during a campaign stop in Sunrise, Florida. "And, I would say the co-founder would be crooked Hillary Clinton.”The comments came one day after the GOP nominee hinted to supporters at another Florida rally that 2nd Amendment supporters could assassinate Clinton in order to stop her from restricting gun rights. “If she gets to pick (US Supreme Court) judges, nothing you can do, folks... Although the second amendment people, maybe there is... I don’t know. But I’ll tell you what, that will be a horrible day.”  It is not the first time the GOP nominee has attempted to link Clinton to the terror organization, with Trump saying that she “should get an award from them as the founder of ISIS” at a campaign rally last week. But Wednesday's attack marked Trump's newest salvo against the Democratic administration, accusing the president of being sympathetic to ISIS while repeatedly using his full name "Barack Hussein Obama."Republicans have long accused the White House of instituting weak or feckless policies in the Middle East, spearheaded by the State Department where Clinton was the former head, which allowed extremist organizations like ISIS room to rise. According to The Guardian, Islamic State origin's can be traced back to 2003 at the start of the Iraq War, when Obama's predecessor, George W. Bush, initiated a ground assault against the Arab state. The Bush administration accused former dictator of Iraq, Saddam Hussein, of constructing weapons of mass with the intention of attacking the US or its allies.