Firefighter spokesman says he is wary of using word "control" in relation to constantly changing fires in North, but some progress made.

By YAAKOV LAPPIN, JPOST.COM STAFF
DECEMBER 4, 2010 16:08
Trees fire Usfiya 311
(photo credit: Channel 10 News)
Advertisement
Police on Saturday announced that some people forced to evacuate their homes due to the fires raging through northern Israel over the weekend can now return.Residents of the following evacuated communities can now return to their homes according to police: Kfar Galim, Kibbutz Hahotrim, Moshav Magdim, Denya (in Haifa), and Tirat Hacarmel.RELATED:
Up-to-date map of fires raging in Carmel
Police: Carmel fire was act of negligence, not arson
Turkey offers assistance in Carmel fire despite tensions
Carmel fire: Barak instructs IDF to mobilize forces
Aharonovitch confirms 3 still missing; search continuesThe following communities will remain off-limits to residents: Ein Hod, Nir Etzion, Ein Chud, and Yemin Orde. A firefighter spokesman on Saturday said that "we're careful to use the word control, but we are recognizing some weakening of the fire, but winds could pick up after nightfall.Firefighters on Saturday afternoon said blazes were still raging in the following areas: Beit Oren, the area between Usfiya and Hik Creek, the Bar-Chai wildlife reserve, Nir Etzion, and Ein Hod. Ground and air units were tackling the blazes. Police were ensuring the area was sealed off to members of the public.Prime Minister Binyamin Netanyahu on Saturday gave orders to rent the world's largest fire-fighting aircraft, called a Super Tanker.Unlike other fire-fighting aircraft sent to help fight the Carmel fire, can operate at night. Additionally, it can drop 21,000 gallons (80,000 liters) of water in a single run.A firefighter spokesman told the Jerusalem Post on Saturday that "the arrival of a US firefighting plane will significantly improve our abilities to combat fires at nights. Nights are a problematic period for us because we see fires rage but are unable to do much until the following morning."Fire Department operations officer Boaz Arkia said that efforts to put out the Carmel fires will likely last one week, at a press conference Saturday morning in Haifa. Police spokesman Micky Rosenfeld toldThe Jerusalem Post that the fire is still not under control and that winds are changing every 15 to 20 minutes, complicating efforts of firefighters. Ten-thousand acres (40,000 dunams) have burned so far in the fire that killed 41 people and left many others injured.Reiterating earlier statements by the police, Arkia said that civilians who return to their homes without authorization are endangering firefighters who are forced to return to danger zones in order to rescue them.Earlier, police officials said at a press conference that the main problem faced by police forces is evacuating residents who returned to previously evacuated areas, at a press conference late Saturday morning. The police have called for residents who have been evacuated not to return until told it is safe to do so.The spokesman said that Fire Department and Border Police forces had to be rescued from Ein Hod where they were attempting to rescue residents who had returned to their homes against evacuation orders, Friday night.An IDF "D9" bulldozer was reported to be preparing to try and clear a fire line protecting Haifa University Saturday afternoon. The fire line was meant to serve as a last line of defense for the University's southern side. It was not clear how close the fire was to the University.While reports said that the fire was dying down near Nir Etzion, it was once again raging adjacent to Usfiya and Ein Hod in the Carmel. The Home Front Command said that it had called up 2,000 reserve IDF firefighters and a fire department spokesman said that all of the professional firefighters from across the country were working.Additionally, contrary to previous reports, the Chai Bar wildlife reserve in the Carmel did not burn and the animals were not in danger.Rescue personnel, firefighters and police rescued several employees of the Ya'arot Hacarmel hotel Saturday morning. One of the employees was treated by MDA for smoke inhalation. The employees had already been evacuated but returned to the hotel on their own.Forty-one people have been killed and scores injured by the fire. Over 17,000 residents of northern Israel have been evacuated from their homes.Firefighters trying to put out fires across the Carmel were "in the same situation that they were in yesterday at nightfall. Currently we are starting the morning with the same tactics that we used yeserday, pushing the fire from green areas to areas that were already burned," Reshef Hezi Levy, a spokesman for firefighting services in Haifa, told Israel Radio Saturday morning.However, Levy said that "we are still far from attaining control over the fire, but we are advancing step by step and are following the plan we formed yesterday and we are pleased with the results."Firefighters restarted efforts to put out the Carmel blaze Saturday morning as more planes from Russia, France, and Greece were en route to Israel to assist with the fire.The blaze continued to rage across the Carmel Saturday morning, between Route 4 and Kibbutz Beit Oren and from western Usfiya to Nir Etzion.Riven initially reported missing after he assisted in rescue efforts.Additional number for information for affected families: 08 977-5717Hotline for immigrants living in the North who might be in need of assistance: 1255081010Police ask all volunteers not to approach fire zones. Volunteers should call Lev Ehad on 02 675 5150 for instructions, or 02 675 5185Yaakov Katz and Tovah Lazaroff contributed to this report.Up-to-date map of fires raging in Carmel 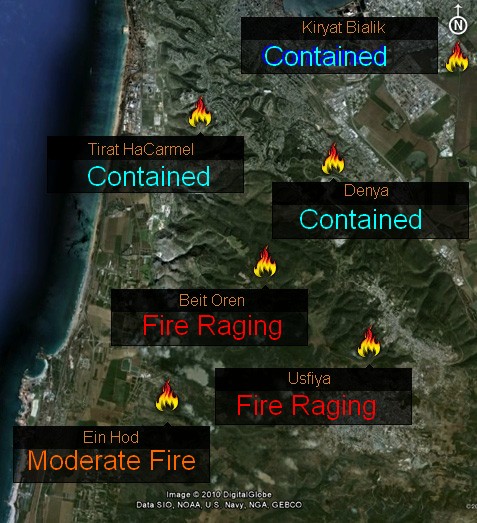