On a typical day, Devora Davidowitz, 18, is up at 6 AM, ready to begin her volunteer work at the Mishpachton – a Dimona-based home for children whose parents cannot care for them. 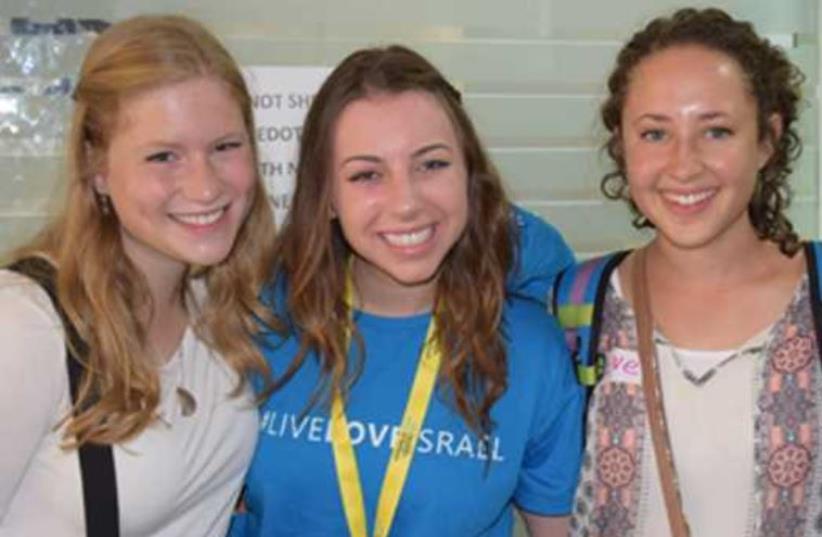 NefeshB’Nefesh Provides Services to Bnot Sherut
(photo credit: NEFESH B'NEFESH)
Advertisement
After waking them up, making sure everyone eats breakfast, and bringing them to school, Davidowitz’s day does not slow down. Together with the other staff members, she plans upcoming holiday celebrations for the Mishpachton, prepares meals, helps the children with homework, and gets them ready for bed. She often doesn’t return to her home until 10 PM.
In another reality Davidowitz, originally from Long Island, New York, would be attending an American college. Instead, she is one of 50+ Bnot Sherut from North America and the United Kingdom who have chosen to spend up to two years volunteering in Israel doing Sherut Leumi, Israel’s National Service.
“There’s a growing interest from girls who are looking for important ways to contribute to Am Yisrael,” said Karen Richman, Nefesh B’Nefesh’s Aliyah Coordinator, who oversees the Olot L’Sherut program. “They’re choosing to leave the familiar track and take the road that is less traveled – and extremely meaningful.”
Sherut Leumi gives young women, ages 18-21, the opportunity to volunteer all over Israel in a variety of places – including schools, museums, and hospitals. During their service, they live in rent-free apartments with other Bnot Sherut and receive monthly stipends to cover their living expenses.
Nefesh B’Nefesh (NBN) provides support for the young women during the application process and throughout the duration of their service in Israel. When they express interest in specific volunteer possibilities, NBN connects them to relevant organizations, finds them adoptive families to host them for Shabbat and holidays, and helps them navigate Israeli bureaucracy. NBN also regularly checks in with their coordinators, and plans festive get-togethers for the young women.
Last month, the new Bnot Sherut from North America and the UK  came together for a celebratory Rosh Hashana breakfast, hosted by Nefesh B’Nefesh.  They ladies discussed their goals for the upcoming year and received a New Year’s blessing from Rabbi Yehoshua Fass.
“By listening to each other’s feelings, they really got a chance to connect and forge a support network,” said Richman.
For many of the young women, Sherut Leumi is a natural part of their Aliyah journey. Eve Marzel, who made Aliyah from Cleveland, Ohio, decided to do Sherut Leumi after studying at Midreshet Harova, a seminary in Jerusalem.
“Like every other Israeli, I knew I wanted to serve the country,” said Marzel. “It’s the best way to integrate, and it’s a great way to give back.” She is volunteering at Bet Sefer Reishit, a school that brings together children with special needs and mainstream children in the classroom.
During their service, the young women’s Hebrew improves, they become immersed in their new community, and they become friends with the other Bnot Sherut, thus widening their social circle. They also get to see a new side of Israel.
Michal Weissberg, a Chicago native, chose to volunteer in a religious community in South Tel Aviv, largely made up of Bukharan Jews and Ethiopian immigrants. “I wanted to expose myself to something completely different than what I’d previously experienced and bring something new to the community,” she said. “I’m getting to know a whole new faction of Israeli society, and for the first time, they’re meeting an Olah from North America.”
For More Information About Sherut Leumi – CLICK HERE
Advertisement
Subscribe for our daily newsletter