Whatever Trump has planned will take shape on Wednesday as he hosts Prime Minister Benjamin Netanyahu for the first time in the Oval Office. 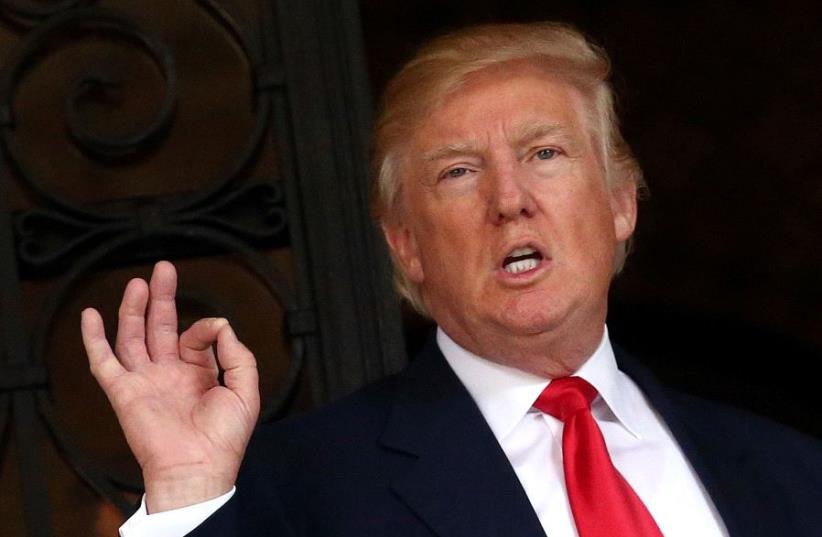 Donald Trump
(photo credit: REUTERS)
Advertisement
WASHINGTON – Congressional Republican leadership paid close attention last week as US President Donald Trump took a sharp turn on Israeli settlements, calling them unhelpful to a peace process he seems anxious to pursue.They were struck by his shift, according to several top aides familiar with their thinking, as it paired neatly with Trump’s decision to reverse course on his vow to swiftly relocate America’s embassy from Tel Aviv to Jerusalem.Considered together, these two policy moves were seen on Capitol Hill as the beginning of a play by Trump for a diplomatic initiative with Israel and the Palestinians. And both House Speaker Paul Ryan and Senate Majority Leader Mitch McConnell now plan to support the president in that effort should he choose to proceed.“There are clear signs he wants to at least attempt a genuine peace process,” one senior Republican aide working on Middle East issues told The Jerusalem Post on Tuesday. “We’re not going to get ahead of the president on this, but we get the sense he wants to give it a real try. It’s his foreign policy to set. And members are largely going to follow the president’s lead.”Whatever Trump has planned will take shape on Wednesday as he hosts Prime Minister Benjamin Netanyahu for the first time in the Oval Office. That meeting will include a lengthy discussion on settlements, according to the president’s press secretary, Sean Spicer.Trump has enough capital within the GOP caucus to proceed with a bid for peace talks, said another top Hill aide, acknowledging that such an effort might require tougher language from the White House on settlements than some members had come to expect.“There’s a pretty small handful of Republicans that are vehemently opposed to a two-state solution, but it’s a really small fraction,” said the aide.“And in any case, the White House’s statements makes Trump one of the most pro-settlement presidents we’ve had since the Six Day War.”Within two weeks of Trump’s inauguration, Israel announced over 5,500 new settlement units – giving administration officials the impression they were being boxed in, just as they were formulating their policy on the conflict.“The United States remains committed to advancing a comprehensive final-status agreement between Israel and the Palestinians that results in two states living side-by-side in peace and security,” the administration told The Jerusalem Post in response. “We urge all parties to refrain from taking unilateral actions that could undermine our ability to make progress, including settlement announcements. The administration needs to have the chance to fully consult with all parties on the way forward.”Spicer later said that continued settlement activity was “not helpful” in their pursuit of a peace process. But existing settlements should not be an impediment to an ultimate deal, he added.Some on the Hill wonder out loud whether Netanyahu encouraged the White House to issue a harsher line.As he often would do during the Obama years, Netanyahu already warned his cabinet members that Trump was unlikely to give Israel carte blanche on settlements – a crucial political tool for him to combat right-wing forces in his coalition.But with the White House apparently ready to endorse a two-state solution, Republican leadership appears ready to revert back to the party’s longstanding position – and battle those figures that had hoped to change course.