Senator Cardin: "We should not stand idle when foreign countries or international governmental organizations use BDS tactics to isolate one of our key allies." 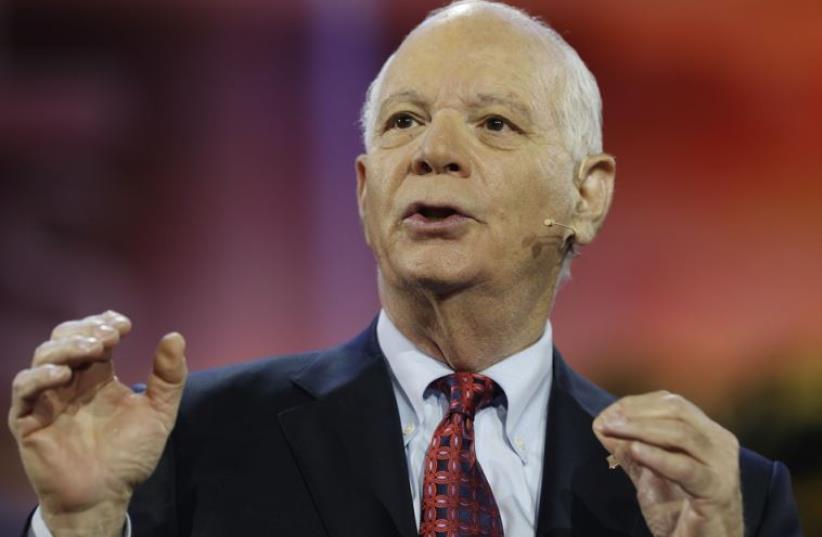 Sen. Ben Cardin (D-Md.) addresses AIPAC in Washington
(photo credit: REUTERS)
Advertisement
WASHINGTON -- Republican and Democratic leaders in both houses of Congress introduced legislation on Thursday that would penalize international governmental organizations and foreign countries seeking to boycott, divest and sanction the state of Israel for its handling of its conflict with the Palestinians.The bill, supported by the American Israel Public Affairs Committee, would amend the Export Administration Act of 1979 to include in its prohibitions on boycotts against "allies of the United States" those fostered by NGOs against Israel. The bill also directs the US Export-Import Bank to combat boycotts against the Jewish state."The United States should bring its foreign policy and its economic institutions, its relationships, and its leverage to bear to combat boycott, divestment, and sanctions actions against Israel," Senator Ben Cardin (D-Maryland) said in a statement, introducing the bill alongside Rob Portman (R-Ohio). "We should not stand idle when foreign countries or international governmental organizations use BDS tactics to isolate one of our key allies. We cannot allow these attempts to bypass direct negotiations between Israel and the Palestinians to go unchecked."Cardin and Portman introduced a similar bill last year. But they now enjoy companion House language as well as the attention of AIPAC, which will encourage swift passage of the bill at its annual policy conference in Washington next week.
Rabbi Sacks on the Boycott, Divestment and Sanctions (BDS) campaign (credit: RABBI SACKS YOUTUBE)
"This bipartisan legislation sends a clear message that politically-motivated boycotts of Israel are unacceptable to the United States," Portman said. "I’m pleased to introduce this bill that says the United States stands against illegitimate attempts to isolate our ally Israel or impose policy solutions to issues that can only be resolved through direct negotiations between the Israelis and the Palestinians."Congressmen Peter Roskam (R-Illinois) and Juan Vargas (D-California) introduced the companion legislation in the lower chamber.The bill states that US policy will be to oppose United Nations Human Rights Council resolution of March 24, 2016, "which urges countries to pressure their own companies to divest from, or break contracts with, Israel, and calls for the creation of a 'blacklist' of companies that either operate, or have business relations with entities that operate, beyond Israel’s 1949 Armistice lines, including East Jerusalem," it reads.If passed, the law would punish violators with a fine in accordance with the International Emergency Economic Powers Act. The bill explicitly states that US opposition to boycotts of Israel shall not be construed as an alteration of US policy "concerning final status issues associated with the Arab-Israeli conflict, including border delineation, that can only be resolved through direct negotiations between the parties."