''I have never considered leaving this post,'' Tillerson said to news outlets. 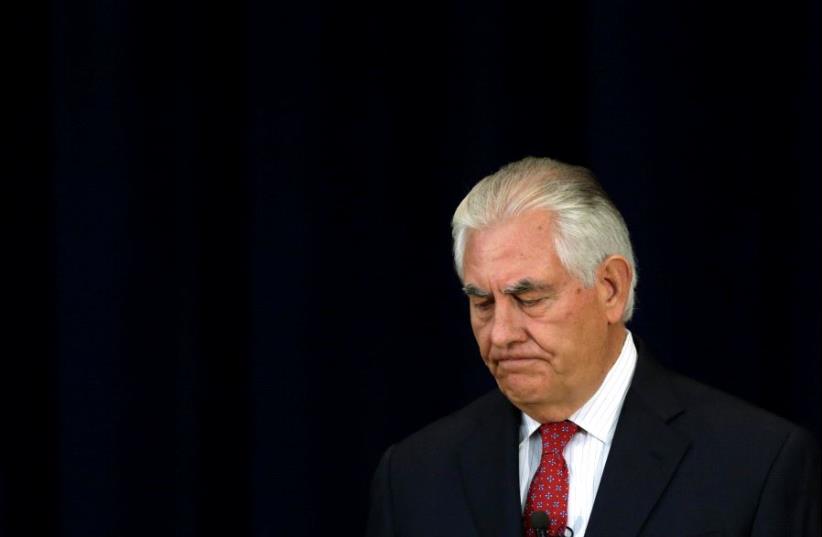 Rex Tillerson
(photo credit: REUTERS)
Advertisement
WASHINGTON – US President Donald Trump was sent into a fury on Wednesday after NBC News reported that Rex Tillerson, his secretary of state, had called him a moron.The report is one of many asserting that Tillerson periodically weighs resigning from the Trump administration – a consideration that allegedly reached peak level mid-summer after Trump delivered a crude, highly political speech to the Boy Scouts of America, an organization Tillerson once ran.
Secretary of State Rex Tillerson denies he nearly quit his post in July, October 5, 2017. (Reuters)
Claims that Tillerson believes Trump is an idiot with no impulse control drove the president into a fit of rage ahead of his visit on Wednesday to Las Vegas, Politico reported later that day, forcing the White House chief of staff to hang back from the trip and speak with Tillerson.Later, the secretary made an unusual public statement disputing the NBC report.Speaking before the press at the State Department, Tillerson professed admiration for his “smart” boss and claimed that Trump’s leadership had produced several significant diplomatic achievements in nine short months.“I have never considered leaving this post,” Tillerson said. He declined to comment on whether he had specifically called Trump a moron on July 20, as NBC reported, after Trump recessed a meeting with his national security staff on an unknown topic.
Tillerson: Trump"s tough talk aims to send message to North Korea (Copyright Reuters)
“I’m not going to deal with petty stuff like that,” the secretary of state said.But his spokeswoman, Heather Nauert, later said Tillerson did not use that sort of language and denied that the comment had ever been made.