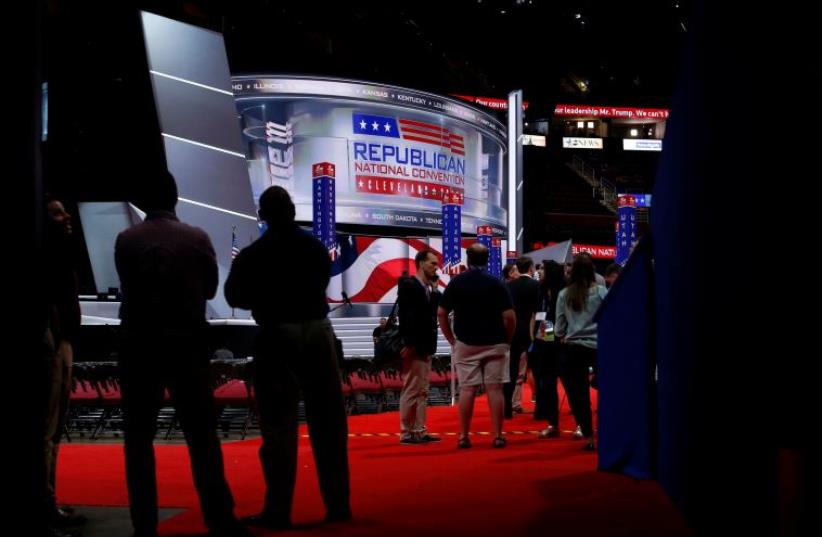 GOP Convention July, 2016
(photo credit: REUTERS)
Advertisement
WASHINGTON – A former adviser to US President Donald Trump now at the center of a special counsel investigation into Russia’s involvement in the 2016 election addressed the American Jewish Committee as a representative of Trump’s campaign last year.It is at least the second known instance in which George Papadopoulos, a volunteer foreign policy adviser to the GOP nominee during the 2016 race, represented Trump on matters related to Israel.Papadopoulos, according to an NBC report on Friday, addressed the national Jewish organization at the Republican National Convention in Cleveland, Ohio, on a panel with members of Congress and the European Union’s top envoy to the United States.Sen. Bob Corker of Tennessee, chairman of the Senate Foreign Relations Committee, offered introductory remarks before the panel discussion began, according to the report.An AJC spokesman acknowledged Papadopoulos’s participation in their event, noting that the organization “takes every opportunity to interact with officials – and prospective officials and their aides – of our government.“It was in this context that we related to Mr. Papadopoulos and among other advisers to the Trump campaign and other campaigns, of both parties, in the course of the 2016 election campaign,” the AJC’s Kenneth Bandler said. “Papadopoulos was only one among the many contacts AJC established and maintained.”The session in which Papadopoulos took part was titled “Defining America’s Role in Global Affairs.”After the November election and Trump’s inauguration, Papadopoulos met with Yossi Dagan, head of the Samara Regional Council, claiming that he was still representing the Trump team.“We [the newly minted Trump administration] are looking forward to ushering in a new relationship with all of Israel, including the historic Judea and Samaria,” he said.Papadopoulos has pleaded guilty to lying to FBI agents as they questioned him on his efforts to liaise between Moscow and the Trump campaign.He was told in April 2016, before Trump’s nomination for president, that Moscow had dirt on Democratic candidate Hillary Clinton that it would like to share with the presumptive GOP nominee.