Pence: Embassy move to Jerusalem is question of 'when, not if'

US Vice President Mike Pence spoke at a Christian Zionist event in Washington. 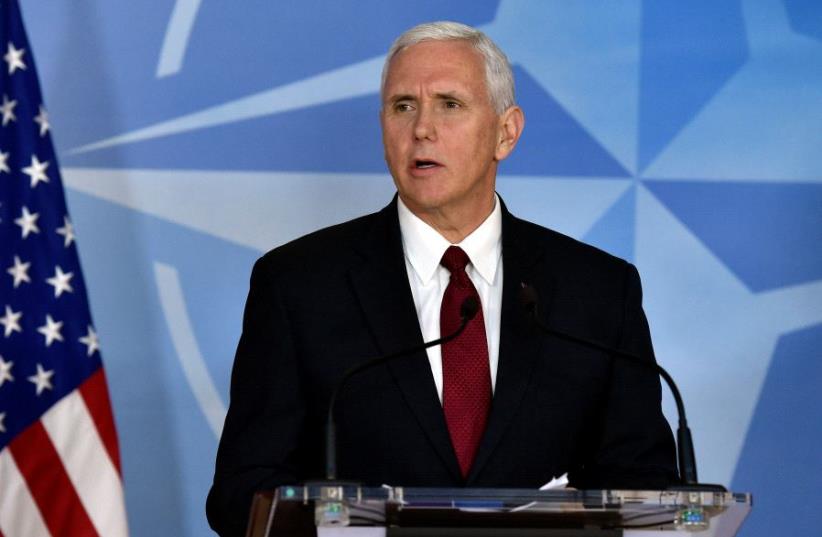 Vice President Mike Pence gives a statement after a meeting at the NATO headquarters in Brussels, Belgium, February 20, 2017.
(photo credit: REUTERS)
Advertisement
The US will never waiver in its support of Israel, its most cherished ally, US Vice President Mike Pence said on Monday at the 12th annual Christians United for Israel summit in Washington.“Let me say with confidence to all who are gathered here and to all the watching world: President Trump and I stand without apology for Israel today. We will stand without apology for Israel tomorrow and President Donald Trump and I will stand with Israel always. Of that you may be assured,” the keynote speaker said, receiving a standing ovation.Pence reiterated that feeling many times throughout his nearly 30-minute speech, saying what an unbelievable honor it was to serve as vice president under a leader who was so committed to defending faith, restoring freedom and especially strengthening America’s unbreakable bond with the Jewish state and the Jewish people.“Standing in Jerusalem, in that ancient and holy city, our president declared for all the world to hear that under his leadership the United States of America ‘will always stand with Israel,’” he added. “President Trump and I stand with Israel for the same reason every freedom-loving American stands with Israel, because her cause is our cause, her values are our values and her fight is our fight.”Pence said the Trump administration’s support wasn’t hollow words, and he had already done so much to rebuild the relationship that had been fractured under president Barack Obama’s tenure. For example, Pence said, Trump had appointed US Ambassador to the UN Nikki Haley and US Ambassador to Israel David Friedman, who both have proven already that things are going to run differently than how they ran in the previous eight years.But regarding moving the embassy, the one decision in which some in the audience were most disappointed, Pence said that this too would change, it is only a matter of time.“To the men and women of Christians United for Israel, this president hears you. This president stands with you,” he said. “And I promise you that the day will come when President Donald Trump moves the American Embassy from Tel Aviv to Jerusalem. It is not a question of if, it is only when.”Pence also praised Israel for turning the desert into an oasis.“Anyone with eyes to see and ears to hear must acknowledge that Israel is a living testimony to the power of hope over hate and so will she always be,” he said. Earlier in the day, Prime Minister Benjamin Netanyahu spoke similar words to Pence, via a live satellite feed from Jerusalem. “America has no better friend than Israel and Israel has no better friend than America,” Netanyahu said. “And Israel has no better friend in America than you.”