The bill enjoys broad support from both Republicans and Democrats on the Senate Foreign Relations Committee, including its chairman and ranking member. 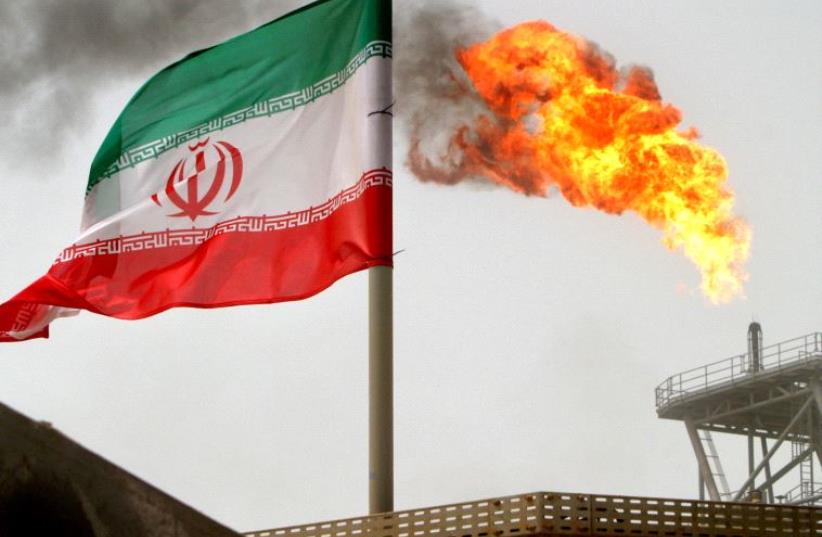 A gas flare on an oil production platform in the Soroush oil fields is seen alongside an Iranian flag in the Persian Gulf, Iran, July 25, 2005.
(photo credit: REUTERS)
Advertisement
WASHINGTON – Bipartisan leadership in the US Senate introduced a bill on Thursday that would severely sanction Tehran over its ballistic missile work and its proxy activities across the Middle East, targeting several Iranian entities that were previously relieved of sanctions under the nuclear accord implemented last year.Passage of the bill “would risk killing the [Joint Comprehensive Plan of Action],” an Iranian American lobbying group based in Washington said in a statement, referring to the formal title of the nuclear agreement.The Countering Iran’s Destabilizing Activities Act of 2017 would designate the Islamic Revolutionary Guard Corps as a terrorist organization – a move bitterly opposed by Tehran. The National Iranian American Council, which has the ear of senior government officials in the Islamic Republic, warned that such a move would “risk American lives” and prompt Iranian retaliation against US troops in Iraq.“The bill would also mandate the re-imposition of sanctions on Iranian entities that were delisted pursuant to the JCPOA – measures that could constitute a clear violation of the nuclear deal,” the lobby argued.Indeed, the legislation would provide US President Donald Trump with the authority to sanction any individual or entity “engaged in any activity that has materially contributed, or poses a risk of materially contributing, to the activities of the government of Iran with respect to its ballistic missile program, or any other program in Iran for developing, deploying or maintaining systems capable of delivering weapons of mass destruction, including any efforts to manufacture, acquire, possess, develop, transport, transfer or use such capabilities.”Acceding to the nuclear deal in 2015, the US agreed to remove all of its sanctions on Iran targeting individuals and entities involved in the advancement of its nuclear work. But several of those that now enjoy sanctions relief are the same figures and organizations actively involved in Iran’s ballistic missile program and its asymmetric operations across the Middle East and North Africa, which would now face new penalties.This would likely include Iranian banks that were recently removed from Treasury Department lists.Shortly after the nuclear deal was concluded, the Iranian government warned that old sanctions passed under a different name would be treated as a direct violation of the agreement. The US maintains the ability to pass nonnuclear sanctions against relevant individuals at will.
Suspected Iran missile launch on Jan. 29, 2017 is "unacceptable" says US UN rep Haley (credit: REUTERS)
The bill enjoys broad support from both Republicans and Democrats on the Senate Foreign Relations Committee, including its Republican chairman and Democratic ranking member.