"What this executive order is doing is making our country less safe." 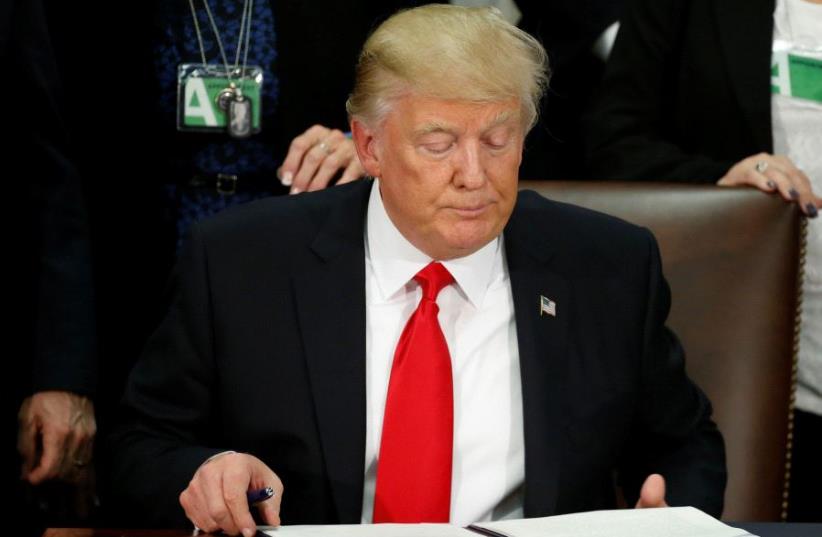 U.S. President Donald Trump reads an executive order before signing it at Homeland Security headquarters in Washington, U.S
(photo credit: REUTERS)
Advertisement
WASHINGTON – The Trump administration has drawn a clear redline against Iran continuing its international ballistic missile program, Ben Cardin, ranking member of the Senate Foreign Relations Committee, told The Jerusalem Post on Wednesday.“The president of the United States said it’s not going to happen – to me, that’s a redline,” Cardin said. “I’m not sure its a good idea – I wouldn’t have said it.”Cardin commented in response to a statement by Michael Flynn, US President Donald Trump’s national security adviser, which put Iran “on notice” over its missile testing and its targeting of Saudi and Emirati assets through its Yemeni proxy organization, the Houthi rebels.Flynn did not specify what actions the Trump administration plans on taking in response, which worries Cardin, who has long expressed concern with Iran’s regional designs.The senator was attending an event for the Muslim Jewish Advisory Council on Capitol Hill, where he made remarks slamming the president’s recent executive order banning refugees and nationals of seven predominantly Muslim countries from entering the country.The American Jewish community has roundly criticized the order, and warned against the Trump administration going one step further – implementing religious tests at America’s borders. The Israeli government has not yet commented on the move.“Israel has a lot of issues that it deals with – it’s for them to make decisions on what they want to comment on internationally,” Cardin said. “But I think that a religious test is wrong on any basis, but as Jews, it makes us even more vulnerable – because we’re minorities, too.“I think there’s a recognition that we all want to keep our country safe,” he said. “What this executive order is doing is making our country less safe. I’m convinced of that. It’ll help with terrorist recruitment, it’ll encourage self-radicalization and it’ll jeopardize Americans’ safety traveling abroad. So I think that we have to speak out.”