US President Donald Trump commemorated the horrors Poland suffered during both Soviet and Nazi occupations during a speech in Warsaw. 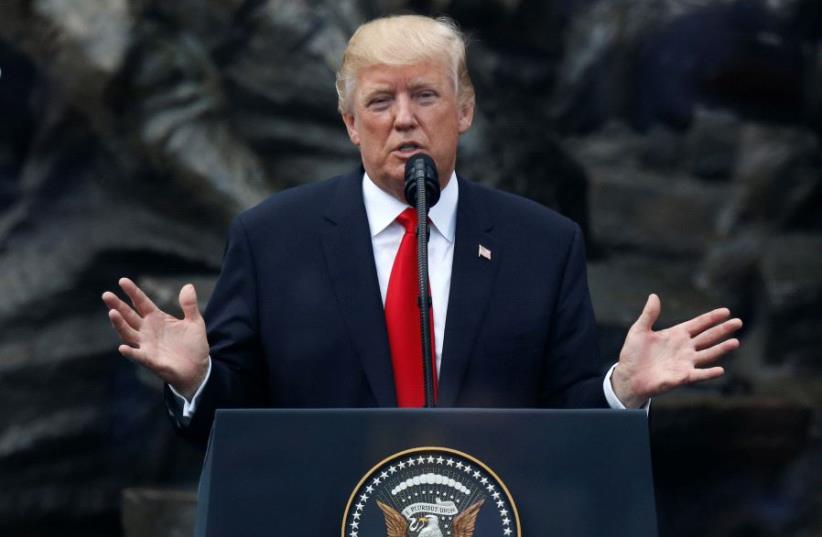 US.President Donald Trump gestures as he gives a public speech at Krasinski Square in Warsaw, Poland July 6, 2017
(photo credit: REUTERS)
Advertisement
US President Donald Trump on Thursday commemorated the darkest chapters of Polish and Jewish history in a speech given at the Polish capital's Warsaw Uprising Monument on Krasinski Square. The speech was part of an official visit ahead of the G20 meeting in Hamburg later in the week."Under a double occupation, the Polish people endured evils beyond description: the Katyn forest massacre, the occupations, the Holocaust, the Warsaw Ghetto and the Warsaw Ghetto Uprising. The destruction of this beautiful capital city and the deaths in nearly 1 in 5 Polish people."Trump then made mention of Poland's Jewish history, stating, "A vibrant Jewish population, the largest in Europe, was reduced to almost nothing after the Nazis systematically murdered millions of Poland's Jewish citizens along with countless others during that brutal occupation."He went on to pay tribute to the Warsaw Uprising, the largest military operation undertaken by a resistance group during the Second World War."In the summer of 1944, the Nazi and Soviet armies were preparing for a terrible and bloody battle right here in Warsaw. Amid that hell on earth, the citizens of Poland rose up to defend their homeland. I am deeply honored to be joined on stage today by veterans and heroes of the Warsaw Uprising." 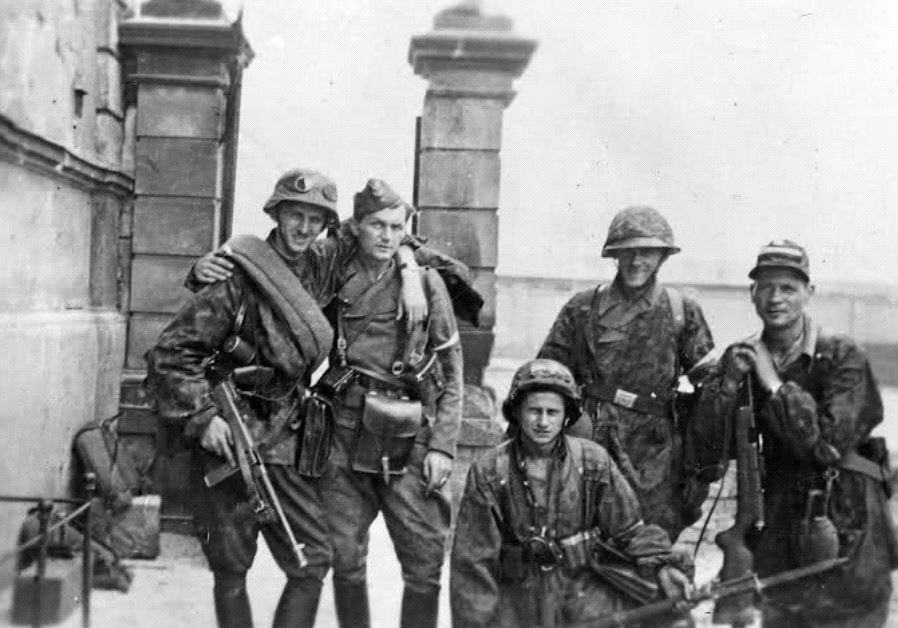 Home Army soldiers from Kolegium 'A' of Kedyw formation on Stawki Street in the Wola District of Warsaw, September 1944 (photo credit: Juliusz Bogdan Deczkowski - Public Domain)Trump connected the Poland's past struggle against Nazi and Soviet brutality with today's global War on Terror: "We are confronted by another oppressive ideology, one that seeks to export terrorism and extremism all around the globe. America and Europe have suffered one terror attack after another. We're going to get it to stop."He continued, referencing his May 21 speech at the Arab Islamic American Summit in Riyadh: "During a historic gathering to Saudi Arabia, I called on the leaders of more than 50 Muslim nations to join together to drive out this menace which threatens all of humanity. We must stand together united against these shared enemies - to strip them of their territory and their funding and their networks and any form of ideological support they may have."Earlier in the week leaders of the Polish Jewish community had criticized Trump for not including a stop at a monument for the Warsaw Ghetto Uprising in the itinerary of his visit to Poland.The rebuke Wednesday by Polish Chief rabbi Michael Schudrich, Anna Chipczynska, the president of Jewish Community of Warsaw, and Leslaw Piszewski, the president of Union of Jewish Communities of Poland, came in a joint statement. In it, the undersigned called the absence of a presidential visit to the Monument to the Heroes of the Warsaw Ghetto a “slight.”First daughter Ivanka Trump however on Thursday did visit the Monument to the Ghetto Heroes, where she laid a wreath, and the POLIN Museum of the History of the Polish Jews.

It was a deeply moving experience to be able to visit The Monument to the Ghetto Heroes and the POLIN Museum of the History of the Polish Jews. It was a privilege to be able to pay my respects and remember with gratitude those who fought with such tenacity against all odds. #POTUSinPoland
A post shared by Ivanka Trump (@ivankatrump) on Jul 6, 2017 at 3:34am PDT


JTA contributed to this report.