After Thursday's dinner, Trump tweeted that he had a "very good meeting" with Moon and that "many subjects (were) discussed including North Korea and new trade deal!" 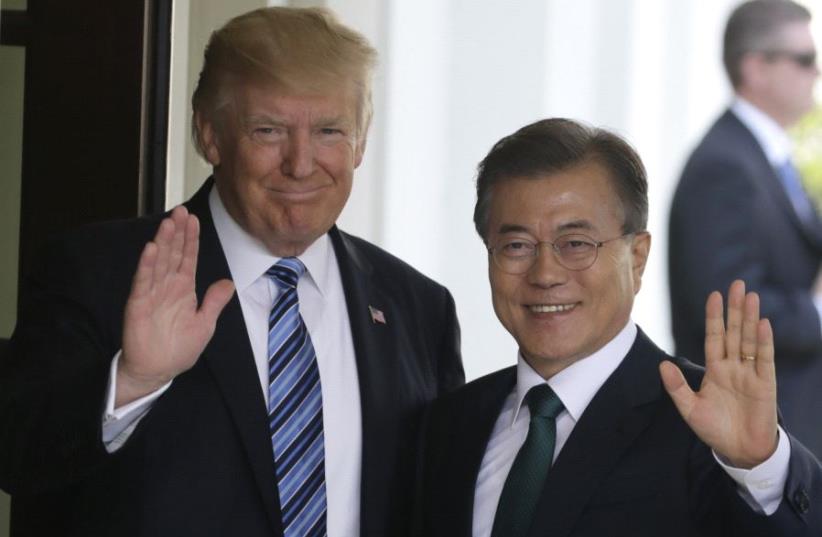 US President Donald Trump welcomes South Korean President Moon Jae-in at the White House in Washington, June 30, 2017
(photo credit: JIM BOURG / REUTERS)
Advertisement
WASHINGTON - US President Donald Trump and South Korean President Moon Jae-in met for a second day of summit talks on Friday focusing on North Korea's nuclear threat and on trade, after the US president said they had discussed a new trade deal to replace one that he sees as unfair.Moon, making his first trip to the United States since becoming president in May, was greeted again by Trump at the White House, where he attended a dinner hosted by the US president on Thursday.Trump has spoken harshly about US trade imbalances and threatened to tear up a five-year-old trade agreement reached with South Korea by his predecessor Barack Obama. Moon, meanwhile, has taken a wary stance on the Terminal High Altitude Area Defense (THAAD) anti-missile system that the United States deployed in South Korea in March.After Thursday's dinner, Trump tweeted that he had a "very good meeting" with Moon and that "many subjects (were) discussed including North Korea and new trade deal!"At the start of Friday's meeting, Trump said a renegotiated trade deal would be more equitable and "many options" were being discussed on North Korea.The US goods trade deficit with South Korea has more than doubled since the KORUS pact took effect in 2012, from $13.2 billion in 2011 to $27.7 billion in 2016. It was forecast to boost US exports by $10 billion a year but they were $3 billion lower in 2016 than in 2011.Moon said on Wednesday that unfair trade practices would be eradicated and factors that limited competition, such as market entry barriers and price regulations, would be re-evaluated under his administration.His meetings with Trump, however, are likely to focus on North Korea. Moon has said he wants to form a friendship with Trump and find common ground on North Korea.He told Reuters last week he wanted to discuss a two-phased approach, starting with a freeze on North Korea’s nuclear and missile development followed by complete dismantlement.Trump wants China, North Korea's neighbor, ally and main trading partner to do more to rein in Pyongyang's nuclear and missile program.He sought to woo China after a summit meeting with Chinese President Xi Jinping in April, but has grown frustrated that their relationship has not resulted in stronger action.Washington on Thursday imposed sanctions on two Chinese citizens and a shipping company for helping North Korea's weapons programs and accused a Chinese bank of laundering money for Pyongyang.The administration also announced plans to sell Taiwan about $1.42 billion in arms, prompting angry response from Beijing, which considers Taiwan a renegade province and opposes sanctions outside a UN framework.