The list includes 78 terrorist acts from September 2014 to December 2016 which the White House deems underreported by the media. 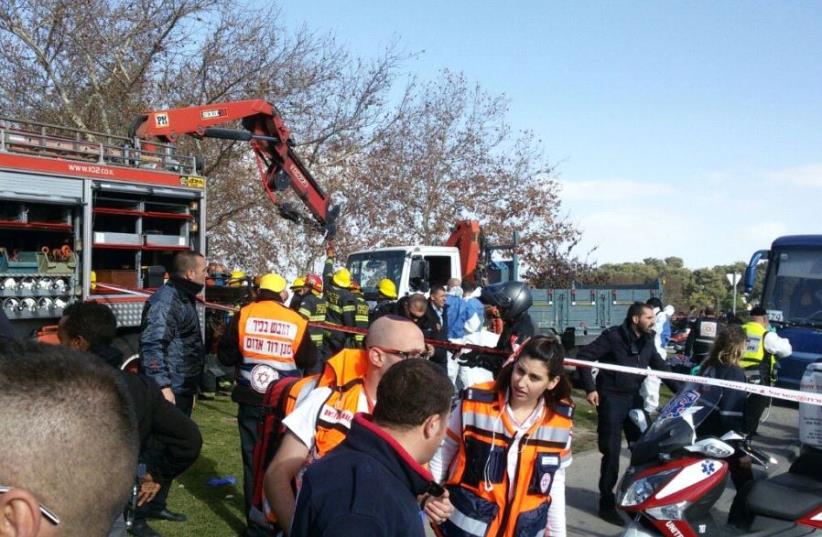 Scene of suspected ramming terror attack in Jerusalem, January 8, 2017
(photo credit: MAGEN DAVID ADOM)
Advertisement
No attacks in Israel were included on a list of 78 “underreported” terrorist attacks released by the White House.The list, which includes attacks around the world from September 2014 to December 2016, was released Monday after President Donald Trump spoke of the dangers of “radical Islamic terrorists” and said the media often did not want to report on terror attacks.“In many cases, the very, very dishonest press doesn’t want to report it. They have their reasons, and you understand that,” Trump said Monday, according to The Washington Post.White House spokesman Sean Spicer later clarified that the president believes terrorist attacks are “underreported” — not “unreported” — by the media.“He felt members of the media don’t always cover some of those events to the extent that other events might get covered,” Spicer said Monday, according to The Washington Post.Daniel Shapiro, the former U.S. ambassador to Israel, wrote on Twitter that the omission of attacks in Israel “is really hard to explain,” adding that several attacks “were genuinely underreported.”

Some of the dozens of attacks on the White House list were widely covered in the media, such as a series of attacks in Paris in November 2015, and mass shootings in Orlando, Florida, and San Bernardino, California, in June 2016 and December 2015, respectively.Attacks in Israel were omitted from the list, though over 350 terrorist attacks — including stabbings, shootings, vehicular ramming attacks and a bus bombing — have taken place since Sept. 13, 2015, according to a report released last month by Israel’s Foreign Affairs Ministry.Trump’s comments hinting at a journalists’ conspiracy to downplay terrorist attacks were widely derided by the media. “This appears to be a talking point that is in search of a set of facts that just doesn’t exist,” said Jim Acosta, senior White House correspondent for CNN. The Washington Post noted that the list didn’t include include attacks on non-Western victims.The White House did not respond to a request from JTA seeking comment.