Danon: 'We cannot allow anti-Semitism to become the official language of the UN'

At JPost Conference, Danon says that "to stay silent is to legitimize" the anti-Israel rhetoric at the UN. 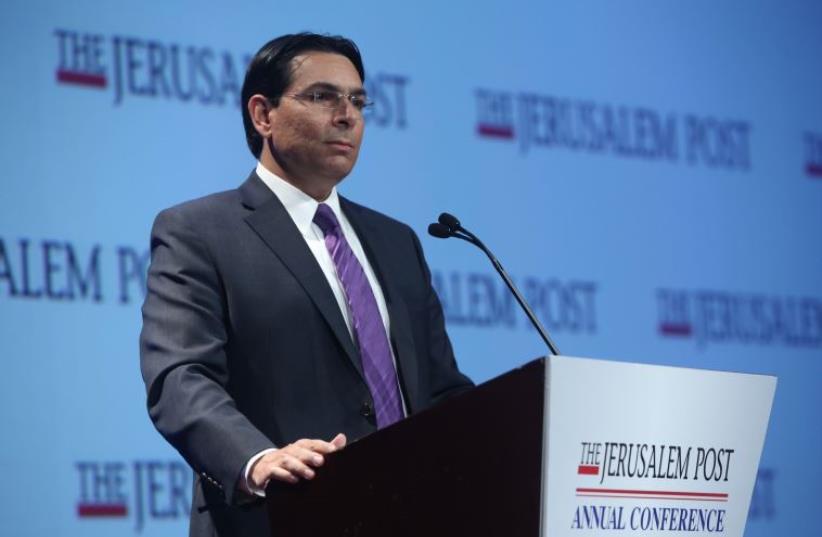 Danny Danon at JPost Annual Conference
(photo credit: MARC ISRAEL SELLEM)
Advertisement
NEW YORK – “Every time we hear hate and attacks against the Jewish people, against the state of the Jewish people [at the UN] we will respond,” Ambassador to the UN Danny Danon said Sunday.“The Palestinians and their supporters are injecting anti-Semitism into the UN,” Danon said at the Jerusalem Post’s 5th annual conference in New York. “With all the years of bias and hostility, we knew about the hypocrisy at the UN but I didn’t think it would come to this point today.”Danon mentioned the comments made by the Palestinian representative in the UN Riyad Mansour last month, in which he drew a comparison between Israel and the Third Reich. He also spoke about the recent incident involving Venezuelan Ambassador to the UN Rafael Ramírez, who asked if Israel sought a “final solution” against the Palestinian people during a speech at an informal meeting of the Security Council on May 6.“When we heard these things from crackpots on the streets we didn’t say anything, but it comes from diplomats in the parliament of nations,” Danon said. “We can’t let anti-Semitism become the official language of the UN.”Danon also slammed officials at the United Nations, including Secretary-General Ban Ki-moon, for failing to condemn anti-Semitism and accusing Israel of “everything and anything,” when only a “moral majority” stands up for the Jewish state.According to him, hatred of Israel is “purely an obsession” of the UN.“When I was appointed to the position, I heard that the UN is biased, that the UN is disgraceful,” he said. “Well, I can tell you that these people were mistaken, they were too polite.”Danon added that “to stay silent is to legitimize” the anti-Israel rhetoric at the UN. “We have to speak out and we must fight back,” he said.“What we are facing now is not about politics, it’s not about Left or Right. It is about hatred, it is about singling out Israel, it is about scapegoating Israel. It is about anti-Semitism pure and simple.”But speaking out isn’t the only way to combat this phenomenon, Danon explained.According to him, this can also be done by “bringing Zionism and Judaism into the halls of the UN.”The ambassador mentioned several efforts of the Israeli mission to the world body to show Israel in a new light including the Seder held last month for UN diplomats, the celebration of the heritage of Jewish refugees from Arab countries earlier this year and the Independence Day celebration some weeks ago.Danon also denounced BDS for “hiding behind the mask of civil rights, of liberty, of peace.”