Douglas at Jpost Conference: I want to be a part of this tribe

“This has been an extraordinary year,” Douglas marveled during a sit-down interview with former Post Editor-in-Chief Steve Linde. 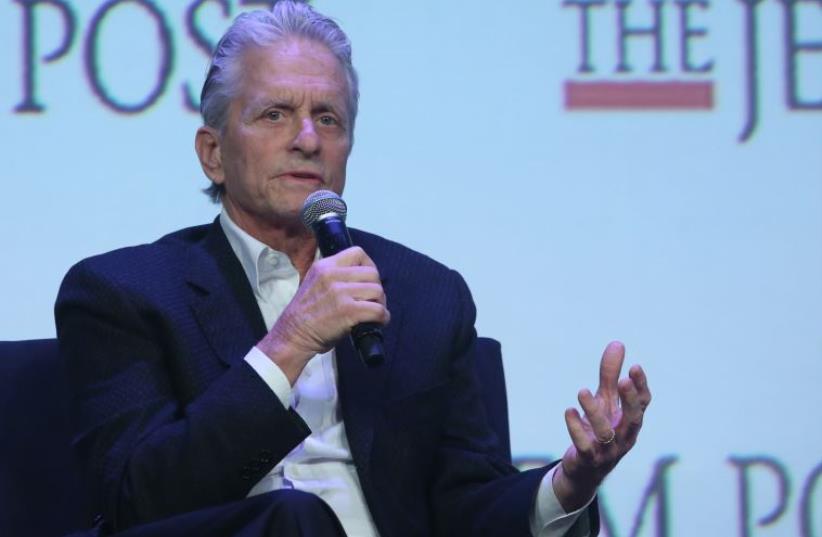 Michael Douglas at JPost Annual Conference
(photo credit: MARC ISRAEL SELLEM)
Advertisement
For two-time Academy Award winner Michael Douglas, this has been the year in which he rediscovered his secular Jewish values.“For my entire life, I believed I was not Jewish,” Douglas revealed, explaining that he was repeatedly told that being the son of a Christian mother and Jewish father excluded him from being a member of the tribe.“I’m a secular Jew, I’m not formally religious, but I wanted to be part of this tribe. I love its values. This year has been about rediscovering Jewish values that I cherish,” Douglas said to a booming round of applause at the Jerusalem Post Conference in New York on Sunday.It’s been a whirlwind year for Douglas, since he was named the second Genesis Prize Laureate in 2015. From speaking on a three-campus tour across the United States with Jewish Agency Chairman Natan Sharansky to delivering a surprise Yom Kippur speech at Temple Shaaray Tefila in Bedford Corners, New York, Douglas has certainly done a lot for the faith, for someone who grew up thinking he wasn’t part of it.“This has been an extraordinary year,” Douglas marveled during a sit-down interview with former Jerusalem Post editor-in-chief Steve Linde.His son Dylan’s interest in the Jewish faith and his work with the Genesis Prize Foundation (GPF) to promote a more inclusive Judaism that embraces interfaith families has resonated with the Hollywood actor.Douglas, GPF and the Jewish Funders Network (JFN) have worked hard to promote that cause.In conjunction with Douglas’s speech at the conference, JFN announced the benefactors of its matching grants program. Twenty eight recipients were selected to coincide with Douglas’s theme of Avenues to Jewish Engagement for Intermarried Couples and their Families, with funding for these projects totaling $3.3 million.“Today, the Jewish world opened its doors a little wider,” Andrés Spokoiny, president & CEO of JFN said in a statement released before he also addressed the conference. “And the impact goes beyond these grants. The gifts being matched, as well as the whole range of amazing projects that were submitted, represent new donors and newly increased levels of giving that this area has never seen before.”The funding originally stemmed from the $1m. prize Douglas received from GPF, which was re-gifted to Hillel International and to the matching-grant initiative run by JFN.Philanthropist Roman Abramovich donated an additional $1m., as well, as part of the matching-grant initiative.“In the spirit of Abraham’s tent, and lifting the flaps, I’m hopeful. I hope it brings Jews in the States and outside of Israel closer together,” Douglas told Linde.Douglas’s son Dylan, is not the only member of the Douglas clan enamored with the faith. Douglas’s father, legendary film actor Kirk Douglas, also experienced an awakening of sorts after a grizzly helicopter crash more than 20 years ago made the actor, now 99, embrace his Jewish roots.“It gives me such nachas to see Dylan wearing the same prayer shawl that my father wore,” a smiling Douglas told the crowd.Linde did manage to catch the usually unflappable actor off guard with a question about the US Presidential election.With the aplomb of a guy who knows how to craftily deflect an unwanted question in front of a crowd Douglas said of the election: “It certainly turned out different than what everyone anticipated!” “I’m historically a Democrat,” he began cautiously.“I’ve supported the Clintons for a long time. Saying that, I know Donald Trump. I play golf with him. But like a lot of situations, if you don’t talk politics and religion you can get along with anyone,” he concluded with a chuckle.