Former IDF Chief: For the time being Assad is the right solution for us 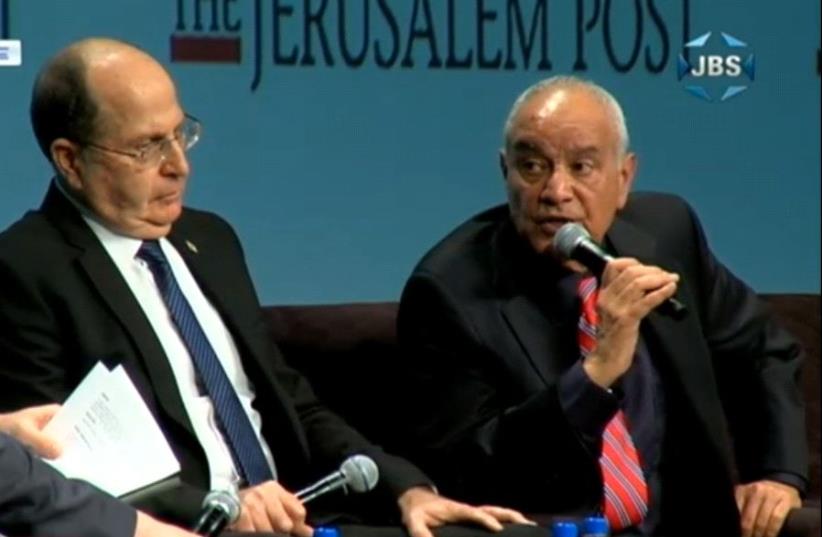 Lt. Gen. (ret.) Dani Haloutz at the 2017 JPost Annual Conference
(photo credit: screenshot)
Advertisement
Former IDF chief of staff Lt.-Gen. Dan Halutz came out in favor of Syrian President Bashar Assad remaining in power, a first for a former Israeli military leader.“For the time being, Assad is the right solution for us for now,” Halutz said on a panel discussion moderated by Yaakov Katz and alongside former defense minister and former IDF chief of staff Lt.-Gen Moshe Ya’alon.Israeli leaders including Defense Minister Avigdor Liberman, have so far called for the removal of Assad, but according to Halutz, Israel should “let him finish the work against terror groups fighting against him first.”The Russians, he added, “are a stabilizing factor in the region.” With Israel reportedly carrying out air strikes against weapon convoys heading to Hezbollah in Syria, the two countries have implemented a system over Syria to coordinate their actions in order to avoid accidental clashes.Ya’alon, who would not say who he thought Israel might want in power on the other side of the border, said Israel would not like to see Iranians on the other side of the border because Tehran is the “main threat” in terms of aspirations and capabilities for both stability in the Middle East as well as against Israel.The Islamic State group “might have aspirations but it does not have the capabilities. Iran on the other hand is a regional superpower,” Ya’alon said, adding that Tehran is “violating UN Security Council resolutions on a daily basis.”But to stabilize the situation in Syria, one must address the needs of the Sunnis which make up the majority of the population in the country, Ya’alon said.For Israel, the policy regarding defense is to not intervene in conflicts of neighboring countries and maintain red lines, but Israel’s “carrot and stick” policy also provides humanitarian assistance to those in need, he said.“We extend our hand and welcome those who need our help, and after they recover, we bring them back home,” Ya’alon said. “That’s how we don’t ignore the tragedy across the border while not interfering in the conflict militarily.”Addressing the topic of Hezbollah and its presumed ability to launch over 1,000 rockets into Israel in a single day of fighting, Halutz said that “when we are looking at the other side strengthening we are not looking at ourselves and how we have strengthened.”Echoing statements made by Education Minister Naftali Bennett in March, Halutz said in the next war with the Lebanese Shi’ite terror group, perhaps the defense establishment will listen to the chief of staff and “destroy Lebanon” if any war was to break-out.“We should use our iron first whenever someone is raising their hand against any Israeli citizen and they should be punished severely for that,” he said, emphasizing that Israel’s retaliation against any attack would go “far beyond the expectations” of Beirut.In 2006, Israel fought against Hezbollah in the 34-day Second Lebanon War and since then, hostilities between them have been limited to occasional firing across the border and reported air strikes by Israel against Hezbollah leaders and military equipment in Syria, where the group is fighting in support of Assad.Hezbollah’s Hassan Nasrallah in February stated that his Shi’ite Lebanese terrorist group will have “no red lines in the next war with Israel” and that Jerusalem “should think a million times before waging any war with Lebanon,” he said.Nasrallah’s remarks came after he called on Israel to dismantle its nuclear reactor in Dimona, warning that Hezbollah missiles were capable of hitting the facility. Following those threats Intelligence Minister Yisrael Katz warned that “if Nasrallah dares to fire at the Israel home front or at its national infrastructure, all of Lebanon will be hit.”According to Ya’alon, Hezbollah “is more evidence that the occupation is not the problem,” stressing that Israel does not occupy any Iranian or Lebanese land “whatsoever” yet Iranian proxies continue to “call to wipe Israel off of the map.”And while non-state actors are the current type of threat to Israel, and not any conventional sort of attack by state armies, Hezbollah has so far remained deterred from striking Israel, Ya’alon said.