The featured American speakers at the conference will be US Secretary of Treasury Jacob Lew and Congresswoman Nita Lowey (D-New York), strong proponents of President Barack Obama’s policies on Iran. 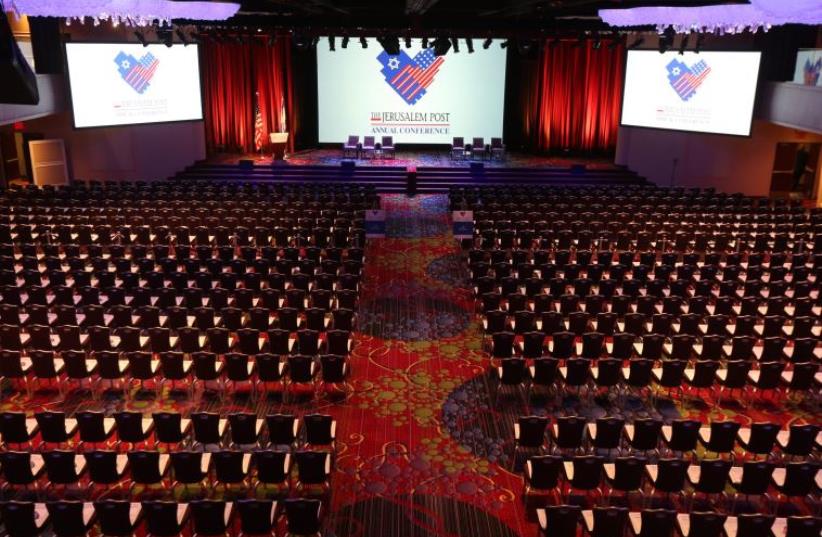 Jpost Annual Conference
(photo credit: MARC ISRAEL SELLEM/THE JERUSALEM POST)
Advertisement
NEW YORK – The differences of opinion between Israeli and American politicians on the forthcoming deal on Iran’s nuclear program are expected to draw attention at Sunday’s annual Jerusalem Post Conference at the Marriott Marquis Hotel in New York’s Times Square.The featured American speakers at the conference will be US Secretary of Treasury Jacob Lew and Congresswoman Nita Lowey (D-New York), strong proponents of President Barack Obama’s policies on Iran.On the Israeli side, Prime Minister Benjamin Netanyahu is to address the conference via video. Other Israeli voices on Iran are to be Netanyahu’s point man on the subject, National Infrastructure, Energy and Water Minister Yuval Steinitz, former Mossad chief Meir Dagan, former IDF chief of staff Lt.-Gen. (res.) Gabi Ashkenazi, former deputy chief of staff Maj.-Gen. (res.) Uzi Dayan and Jerusalem Post Senior Contributing Editor Caroline Glick.Jerusalem Post Editor-in- Chief Steve Linde called upon participants at the conference to show the utmost respect to all the speakers, regardless of their views on the Iran deal. Linde invoked the memory of slain teens Eyal Yifrah, Naftali Fraenkel and Gil-Ad Shaer, whose kidnapping anniversary was marked this past week with a day of unity.“The Jerusalem Post has always been open to diverse views,” Linde said. “Just as the murder of the teens kidnapped a year ago united the people of Israel, despite the different views on Iran by the Israeli and American governments, I hope the conference ends up uniting people behind the strength of the US-Israel relationship.”Linde said he believed the audience would listen attentively to the different sides and then politely draw their own conclusions.“An open public spat is not good for anyone,” Linde said. “We have enough enemies as it is.”Yesh Atid leader Yair Lapid, who has been critical of Netanyahu’s approach on Iran, plans to provide the opposition’s point of view. Lapid is in the US for a series of meetings to combat the effort to boycott, divest and sanction Israel.Jewish Agency chairman Natan Sharansky, an ally of the prime minister, is to talk about immigration and emigration.Ronald S. Lauder, president of the World Jewish Congress, is opening the conference and later moderating a panel on the rise of anti-Semitism around the globe. That panel features Robert Singer, CEO and executive vice president of the World Jewish Congress; Irwin Cotler, member of parliament and former justice minister and attorney-general of Canada; Sara Bloomfield, director of the United States Holocaust Memorial Museum in Washington; and Thane Rosenbaum, author and senior fellow at the New York University School of Law.Other highlights of the event are expected to be speeches by former New York mayor Rudy Giuliani and a performance by singer Dudu Fisher.The event is to be broadcast live on JPost.com, which is providing full coverage of the conference as it happens. Its 1,500 tickets have been sold out.“The response and the buzz about the conference have been so powerful that we filled our capacity,” said Post CEO Ronit Hasin-Hochman. “This seems to be the most important and interesting conference we have had.”