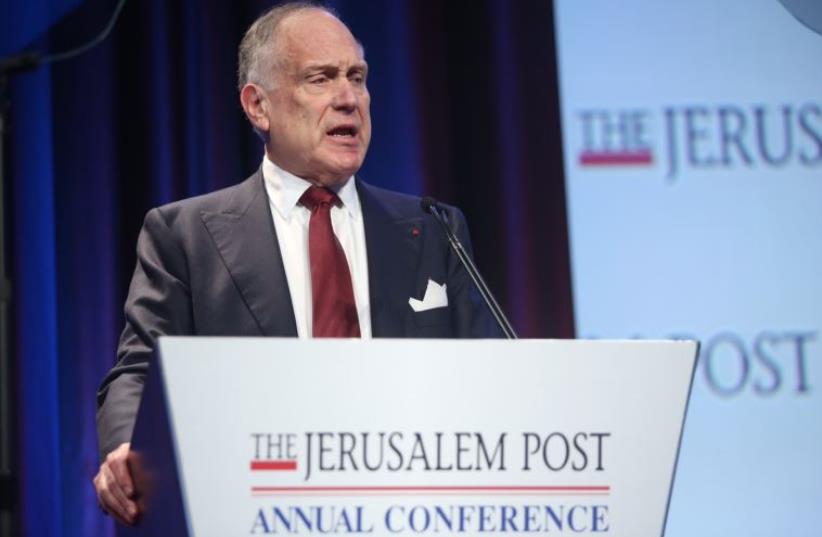 Ron Lauder at JPost Annual Conference
(photo credit: MARC ISRAEL SELLEM)
Advertisement
In a passionate speech at The Jerusalem Post Conference on Sunday, president of the World Jewish Congress Ronald S. Lauder said there has never been a better time to forge a peace agreement with the Palestinians.Speaking at the conference in New York, Lauder recalled Prime Minister Benjamin Netanyahu’s 2009 Bar-Ilan University speech in which he expressed support for the two-state solution told the audience he has spoken with many Arab leaders who have told him they want a peace accord and that the possibility of such an agreement is still strong.“I agree with the prime minister. I believe deep in my bones that peace is possible. In fact, I believe there has never been a better time for peace... Indeed, the makings of a peace deal are clear to those who are willing to listen.”Alongside his call for peace, Lauder condemned the UN as “an anti-Israel cartel,” and described the Boycott Divestment and Sanctions movement against Israel as an international campaign designed to isolate the country.“The UN today is a hotbed of anti-Israel hatred – a place where the world’s worst human rights abusers are given a platform to denounce Israel,” he said.Lauder also condemned the disproportionate attention paid by the organization to Israel.If this attitude persists, he said the US should “re-evaluate” the level of funding it provides to the organization.The WJC president also expressed particular concern for the attitudes toward Israel, encountered by young college students at many university campuses across North America.“From the moment our children arrive at school, they face a barrage of anti-Israeli lies. This is particularly harmful because, for many young people, college is their first exposure to the history and politics of the Middle East,” he said.Lauder alleged that organizations such as Students for Justice in Palestine and the Muslim Students Association are “little more than a recruiting tool for the Muslim Brotherhood,” and said college students were vulnerable to anti-Israel propaganda from these groups.He said the WJC is establishing a network of Jewish political organizations at key colleges and universities to counter the anti-Israel movements on American campuses, who will help train Jewish students about Israel and to be “proud of their heritage, to be proud of Israel and to expose the lies being told about Israel.”The WJC, he said, also compiling a list of colleges and universities that defend members of their faculty “who parrot the Jihadists’ talking points,” and that the list of the worst offenders will be published.“No college campus would allow racist or homophobic hate speech to go unanswered. So why the double standard when it comes to anti-Israel, anti-Semitic hate speech,” Lauder asked.“We will mobilize alumni and donors who care about Israel to stand up and be heard,” he promised. “And, at state schools, we will demand that legislators withhold funding to schools that turn a blind eye to anti-Semitism within their gates.”