United in tragedy and hope

A conversation with the fathers of the "three youths." 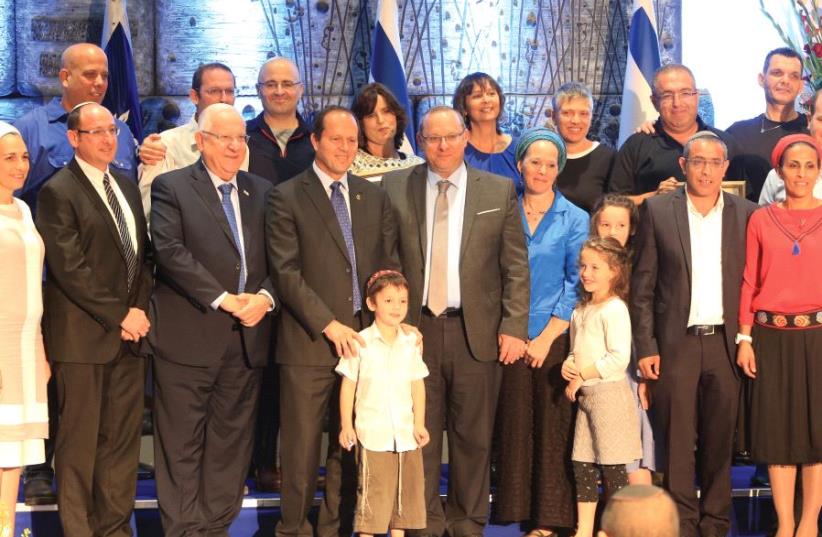 THE FRAENKEL, Shaer and Yifrach families, with President Reuven Rivlin and Jerusalem Mayor Nir Barkat at the Jerusalem Unity Prize award ceremony.
(photo credit: SASSON TIRAM)
Advertisement
Nearly three years have passed since the kidnapping of three Israeli teens – Gil-Ad Shaer, Naftali Fraenkel and Eyal Yifrach – captured the attention of the nation and the world.For two weeks in the late spring of 2014, as their fate was largely unknown, people all over the globe rallied in prayer and hope for their safe return, producing an unparalleled sense of unity and togetherness.Once the bodies were discovered and the motive behind their deaths proven as an act of brutal terrorism, the events set the stage for an extended military campaign between Israel and Hamas.Despite the passage of time, the story of the “three youths” continues to serve as a source of collective pain for Israeli society and the broader Jewish world.Among the numerous tributes developed in memory of the three boys, their parents, together with Gesher and Jerusalem Mayor Nir Barkat, created the Jerusalem Unity Prize. The prize awards individuals and organizations who distinguish themselves in the pursuit of communal, national and global unity.In advance of Unity Day on June 7, when the prize will be presented to the winners in Jerusalem and community events are scheduled to take place across Israel and around the world, we spoke with the fathers of the three boys to discuss their thoughts and what brought them to create this special award.Numerous tragedies continue to impact the people of Israel and there are ongoing threats of terrorist attacks hitting almost every day.Why do you think the story of the three boys remains a source of inspiration for people all over the world? Avi Fraenkel: People felt connected to a tragedy which they realized could happen to them and their children.It allows people to feel emotionally attached to these events.Ori Yifrach: The timeline of the kidnappings, involving well over two weeks of uncertainty, captured the hearts of the world and people continue to remember the emotions they felt during that time.What attracted you to the idea of unity as a way to memorialize your three sons? Ophir Shaer: We know that every period of tension presents an opportunity for unity. There is an ongoing challenge, but we are rarely ready to bring it to the front. There are challenges to unity that need to be confronted. We have learned that unity is a very big concept, but it also gives us an opportunity to do a great deal, and the three years have taught us that we are just at the beginning of making a change.Fraenkel: It’s difficult to define the word unity, but when it exists you can literally feel it. I think that everyone from children and up felt it during that time. Even those far outside of Israel, they felt it. We were literally able to feel that we were all in this together, and we felt that this was the way to memorialize that period. It was the most obvious thing that defined that time and so we connected with the idea to preserve and salute the idea of unity.Yifrach: Unity exists in good times and bad, but sometimes it takes crisis and tragedy to reveal the common bonds that exist within our community.Our personal tragedy exposed that unity and we made it our goal to honor the boys’ memory and find a way for it to preserved as a force for good.Can you share with us one trait from your sons that you think can act as a positive lesson to the world? Fraenkel: Naftali was inspired to help others in need and would actively seek out people on the fringes of society who might have been forgotten and find a way to raise them up.Shaer: One thing I will always take from Gil-Ad, and I think can be a lesson to the world, was his ability to combine aspects of seriousness and remarkable humor, and sometimes even teenage ridiculousness, and transfer seamlessly between these two ideals in life.Yifrach: Eyal always viewed himself as someone who wanted to contribute to and give back to society and to have a positive impact on youth. For more information about the Jerusalem Unity Prize visit www.unityprize.org