The violence in Shuafat refugee camp comes one day after a large protest over sanitation conditions. 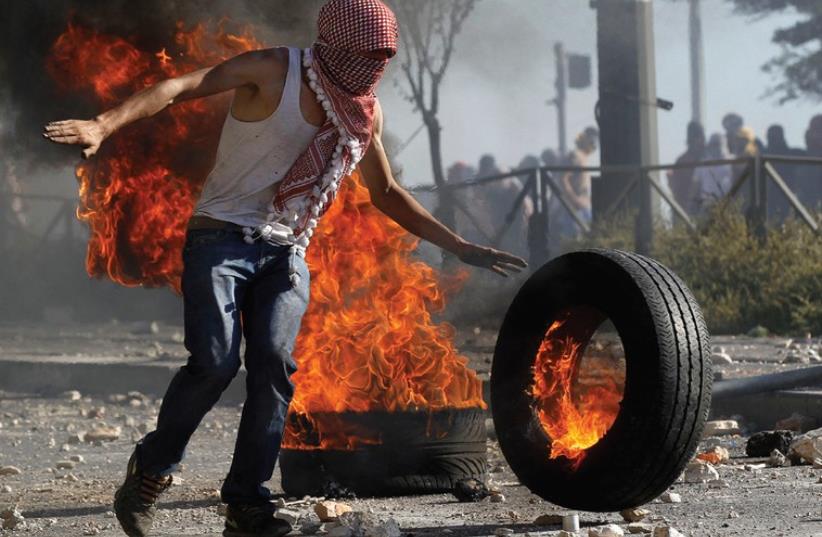 A stone-thrower stands next to a tire set ablaze during clashes with police in Shuafat.
(photo credit: REUTERS)
Advertisement
Three Border Police officers were hospitalized Saturday night after one was struck in the face by a rock during a riot in east Jerusalem’s Shuafat, while two other officers were wounded when a stolen car driven by a Palestinian man rammed into their vehicle, police said Sunday.According to Police spokesman Micky Rosenfeld, the riot began late Saturday night when hundreds of Palestinians gathered in the Shuafat refugee camp and began throwing rocks and firebombs at responding Border Police units.The violence occurred a day after some 60 demonstrators gathered there to protest poor living conditions, and alleged municipal neglect.The protest’s organizers said garbage in the camp is not collected by city trucks, resulting in a dangerous sanitation epidemic.“One of the officers was lightly wounded by a rock that hit his face and was taken to Hadassah University Medical Center in Ein Kerem for treatment,” said Rosenfeld. “Police dispersed the group using stun grenades and carried out security assessments to ensure order was restored.”No arrests or other injuries were reported, he said.Meanwhile, later on Saturday night, at approximately 10:30 p.m., Rosenfeld said two Border Police officers were lightly wounded when a stolen vehicle with three Palestinian males in it rammed into their police cruiser stationed at a road block.“Police were responding to reports of a stolen car on Herzog Boulevard when they pulled over a suspicious vehicle at a security check,” he said.“The driver then floored the car into the police car and the three suspects abandoned the vehicle and fled by foot before being arrested.”Both officers were treated and released at an area hospital, Rosenfeld said.“The background of the incident is criminal, and not terrorism,” he added.