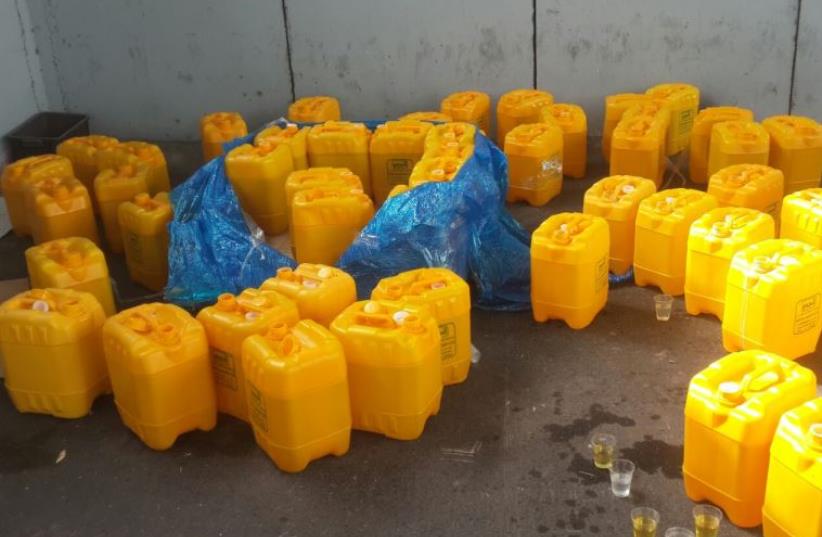 Containers of chemicals confiscated en route to Gaza
(photo credit: CROSSINGS AUTHORITY, DEFENSE MINISTRY)
Advertisement
A Palestinian truck was discovered smuggling hundreds of liters of the banned substance TDI, with the intention of transporting the goods to the Gaza Strip, the Defense Ministry revealed on Monday.The truck, which was crossing from Judea into Green Line Israel through the Tarkumiya crossing, was registered as carrying a delivery of “soybean oil.” The vehicle aroused the suspicion of inspectors from the Defense Ministry’s Crossings Authority, and a preliminary chemical test on the oil containers discovered an unidentified substance.The material was confiscated and sent to a lab for detailed testing, where it became clear that the liquid inside the containers was the dual-use material TDI, prohibited from entering the Gaza Strip.
Soybean oil (left) next to banned substance TDI (right)
TDI serves as a central component of rocket fuel, and is used in an array of Hamas’s and Islamic Jihad’s rocket arsenals.The 450 liters of TDI would have been sufficient for the production of a “large quantity” of rocket fuel for various projectiles, according to the Defense Ministry. The findings of the lab tests were transferred to security authorities, which have opened an investigation into those involved.Since the beginning of the year, the Shin Bet (Israel Security Agency), the Defense Ministry’s coordinator of government activities in the territories and Crossings Authority units and the Israeli Police have thwarted more than 500 attempts to smuggle illicit goods from Israel into the Gaza Strip. Since 2014, more than 280 trucks have been confiscated as a result of illegal activity.