The five defendants, out of an initial seven who were indicted, were part of a plot to carry out terror attacks in Israel and target Druse Israelis, security personnel, and others. 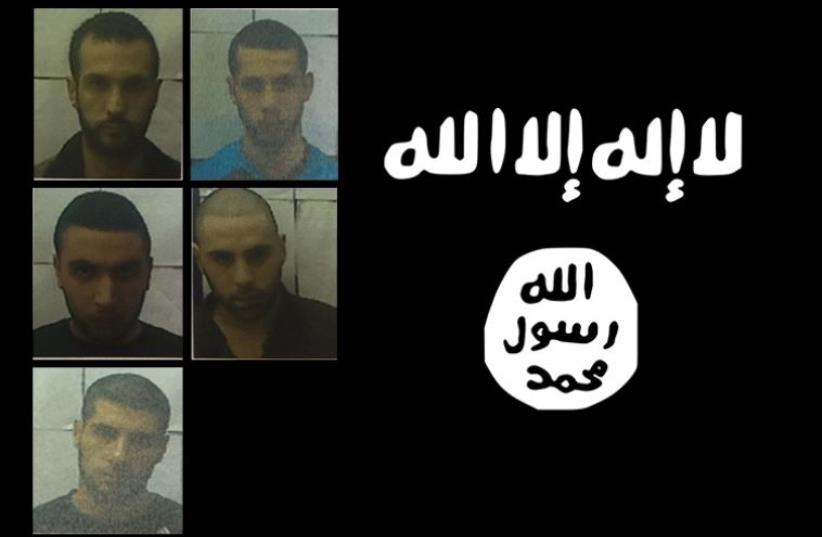 Suspected ISIS members arrested by Shin Bet
(photo credit: SHIN BET,JPOST STAFF)
Advertisement
The Haifa District Court on Thursday sentenced five Israelis to jail terms of between two-and-a-half and six years as part of a plea bargain for their role in attempting to set up a branch of Islamic State in the country.The five defendants, out of an initial seven who were indicted, were part of a plot to carry out terrorist attacks in Israel and target Druse, security personnel and others.The defendants were charged with membership and activity in a banned organization (then-defense minister Moshe Ya’alon banned ISIS as of September 2014), aiding a terrorist group and attempted contact with a foreign agent, for their plot to set up a branch of ISIS in Israel and eventually fight in Syria.All seven defendants were arrested in a joint Shin Bet-Israel Police operation in November and December 2014, but the case was kept under a gag order until the Haifa court removed it when the indictment was filed in January 2015.The five defendants sentenced were Hasam Marisat (sentenced to two-and-a-half years), a former security prisoner from Deir Hanna in the Lower Galilee; Karim Abu Tzalah (sentenced to six years); Sarif Khaled Abu Tzalah (sentenced to three years); Muhammad Abu Tzalah (sentenced to two-anda- half years); and Fadi Bashir (sentenced to three years), all from Sakhnin, which is not far from Deir Hanna. Muhammad Abu Tzalah was training to be a pharmacist at the time of his arrest, the Shin Bet (Israel Security Agency) said.The trial of the sixth defendant, Adnan Aladin, 40, a lawyer in Nazareth, who was also indicted in January 2015, is ongoing, while the Justice Ministry had not responded at press time as to the status of the case against the seventh defendant, Ala Abu Tzalach.Ben Hartman contributed to this story.