A guide to the upcoming PA municipal elections

Palestinian analyst Jihad Harb: Neither Hamas nor Fatah can afford to cancel this vote. 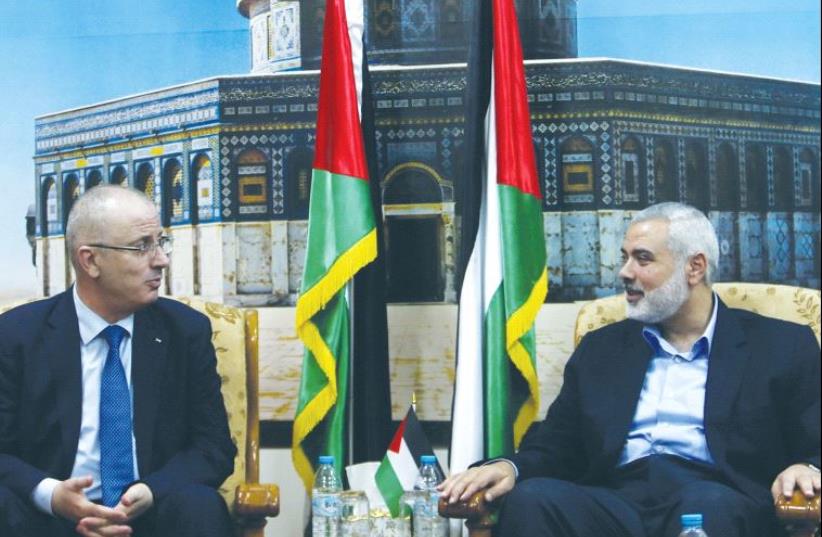 SENIOR HAMAS leader Ismail Haniyeh meets with Palestinian Prime Minister Rami Hamdallah at Haniyeh’s house in Gaza City in 2014.
(photo credit: REUTERS)
Advertisement
The Palestinian political arena has not witnessed national elections in which both Hamas and Fatah participated since the 2006 parliamentary elections. However, the Palestinian Authority (PA) government, led by Prime Minister Rami Hamdallah, announced in late June that municipal elections would take place on October 8.Initially it appeared that the elections would take place solely in the West Bank with Hamas boycotting them. But Hamas announced in mid-July that it would participate in and allow them to take place in Gaza.Jihad Harb, a researcher and analyst of Palestinian politics, spoke to The Jerusalem Post at the offices of the Palestinian Center for Policy and Survey Research in Ramallah about the upcoming elections and their implications.Harb believes that the PA and Fatah decided to the hold the elections because they believed that Hamas would boycott them as it did in 2012, but that Hamas surprised the PA and Fatah in announcing its participation in the elections.Harb stated further that neither Hamas nor Fatah has the ability to postpone or cancel the elections.“The train has left the station, and it is no longer possible to postpone these elections… [Neither] Fatah nor Hamas wants to bear responsibility for postponing or canceling the local elections,” he said.Harb also suggested there will be no absolute winner in these elections, as Fatah has a strong presence in the rural areas but a weaker presence in the cities, especially that of Hebron, al-Bireh, and to some extent Nablus.“I don’t expect an absolute winner,” he remarked. “Both in Gaza and the West Bank, Fatah, Hamas, and other movements will win some of the seats on the different local councils.”Harb claimed if Hamas wins a number of the local elections, the United States and other donor countries will halt their aid to Hamas-backed Palestinian municipalities.Yet Harb believes that the Israeli civil administration, which coordinates security and administrative matters in the West Bank and Gaza, will continue to work with the Hamas-backed municipalities.

Post: What are the municipal elections? Harb: The municipal elections are elections in which Palestinians elect local councils for Palestinian, villages, towns, and cities. These councils are important in terms of administering services such as electricity and water. There are a total of 416 local councils between the West Bank (391) and Gaza (25).Why did the Palestinian Authority decide to hold these elections?I think that the government and the Fatah Central Committee, standing behind the government, believed Hamas would boycott these elections when they made the decision to hold them. They thought that they could hold the elections as they did in 2012 – only in the West Bank and without Hamas’s participation.The government and Prime Minister Rami Hamdallah wanted to say that they succeeded in holding elections and partaking in the democratic process.However, Hamas surprised the government not only in its decision to allow the elections to take place in Gaza, but also its decision to participate in the elections. There are a number of considerations that explain why Hamas made this decision.First, Hamas wants to know where it stands vis-a-vis the Palestinian public. In the last municipal elections in 2004 wherein both Hamas and Fatah participated, Fatah won 34 percent and Hamas 30 percent of the vote. Today Hamas wants to know if it still holds a major stake in the West Bank and Gaza despite what public opinion polls have said in recent years.Second, regional circumstances are placing pressure on Hamas to participate in the elections. For example, when Hamas said it rejects the attempted coup in Turkey and supports Erdogan as an elected president, it made it difficult for it to oppose elections in its own backyard.Third, Hamas wants Fatah to assume partial responsibility for the services of Gaza’s municipalities, which are underfunded and highly indebted. Hamas is unable to receive international aid to develop Gaza’s infrastructure, and believes that Fatah’s presence in Gaza municipalities could help its municipalities in gaining funding and even international aid. If Fatah wins seats in Gaza, Hamas will turn to Fatah and say it needs to support Gaza’s municipalities including its workers.Fourth, Hamas also wants to send a clear message to Fatah that even in the latter’s headquarters in the West Bank, it has a presence.Why are Hamas and Fatah saying they will not field their own candidates, but rather support independent and technocratic lists?I believe that all the discussion of Hamas and Fatah supporting independent and technocratic candidates is a campaign tactic and for the media’s consumption.In Gaza, Hamas will field its own candidates. Perhaps they will not be the most prominent Hamas members because these are municipal elections. But Hamas will put forth candidates from its cadres and members.As for the West Bank, Hamas fears that the Palestinian Authority Security Forces and Israel could arrest its candidates. Thus, it will support independent candidates who are close to Hamas, but do not belong the organizational structure of Hamas.Regarding Fatah, I think it will be difficult for it to support independent candidates because local members of Fatah believe they deserve leadership roles in the municipalities.Nonetheless, Fatah may choose to support independent candidates at the top of its lists who are closely connected to Fatah, and then fill the body of their lists with known Fatah members.What is the role of clans in these elections? Clans play an important role in local elections because most villages or towns are made up of two or three clans. Often a single clan will support different movements, but blood connections are strong and many members of a given clan will often vote together. As for the cities, there are usually more than a few clans, but the economically powerful clans such as the Masri family in Nablus still play important roles and can give a boost to a specific list.Hamas and Fatah are accusing each other of sabotaging the democratic process and arresting each other’s cadres. Do you think it is possible that the municipal elections could be postponed or canceled?In my opinion, the train has left the station and it is no longer possible to postpone these elections with the exception of a major event, wherein Israel prevents them from taking place. But I don’t believe such an event will take place considering Israel allowed municipal elections to happen in 2012.Fatah nor Hamas wants to bear responsibility for postponing or canceling the local elections. Thus, neither will dare try to make such a move. Moreover, in 2006 Fatah could have canceled the parliamentary elections, but didn’t because it feared the popular consequences of undermining the democratic process.That being said, the continued arrest of Fatah’s members in Gaza and Hamas’s members in the West Bank could negatively influence the atmosphere for holding elections, but I still don’t think either movement will be bold enough to postpone or cancel the elections.Fatah is suffering from internal divisions, and there is a lot of discussion of Fatah fielding more than one list. Is this a real possibility, and how will that affect its prospects of winning a majority of seats in the different municipalities?In Gaza, I believe that there is a strong possibility that two Fatah lists will be fielded, an official Fatah list and a list backed by Mohammed Dahlan. If such a scenario materializes, Dahlan’s list may make a coalition with the official Fatah list after the elections, but that is not a certainty.As for the West Bank, there is also a strong possibility that there will be multiple Fatah lists, but that will not necessarily undermine Fatah as the combination of the official and unofficial lists may still provide it with a majority. However, if one of Fatah’s lists cannot break the electoral threshold of 8 percent in a given municipality, that can increase Hamas’s chances of defeating Fatah there.

Who do you believe will win these elections? I don’t expect an absolute winner.Both in Gaza and the West Bank, Fatah, Hamas and other movements will win some seats on the different local councils.It is true that Fatah has a stronger constituency in rural areas than Hamas. However, Hamas has a stronger constituency in some cities such as Hebron and al-Bireh. In rural parts of the West Bank, Israel is in control of security and administrative affairs. So the PA and Fatah by association is not scrutinized for its governing capabilities there. That being said, in the cities, the PA is in control and the ongoing security crises and inability to provide certain services have affected Fatah’s popularity.I think it is fair to conclude that the Fatah will win in a majority of the rural villages and towns. As for the cities, I think Fatah will do well in Gaza because the people have experienced the burdens of living under Hamas. Meanwhile, people in the West Bank cities have been living under the PA and have not lived under Hamas, which explains why some cities will vote in favor of Hamas.If Hamas wins a number of elections, especially in the West Bank, what does that mean for international aid that supports municipalities?If Hamas wins some of the municipal elections, it will likely mean that international aid to the Hamasbacked municipalities will come to a halt. But I think that reveals a contradiction, in which the international community calls for elections and democracy, but simultaneously rejects certain people and movements.In 2004, Hamas won some of the municipal elections and a number of municipalities suffered from donor countries freezing their aid.Does the average Palestinian understand the consequences of voting for Hamas in terms of international aid?I think most Israelis knew that voting for right-wing parties such as Bennett’s and Liberman’s parties would not go over well in the international community, but they still voted for them. Likewise, on Election Day, Palestinians are not thinking about what others want, they are thinking about what they want.Will Israel work with the Palestinian municipalities?Yes, I believe the civil administration will work with mayors of the different municipalities because it has a responsibility to coordinate services, and the municipalities are primarily responsible for providing services.Moreover, I don’t think Hamas will have a problem with that either as long as the relationship is solely built on providing services. In fact, Hamas said in 2006 that it does not have a problem in cooperating with Israel on the issue of services.Will these elections pave the way to reconciliation or reinforce the division? On the one hand, if these elections succeed they will incentivize the Palestinian people to call for parliamentary and even presidential elections.Perhaps some people will even take to the streets calling for such elections.On the other hand, part of these elections is a political competition, in which both sides want to criticize and blame each other, which does not move the reconciliation process forward.Why should Israelis care about these elections?The Israelis are in the Palestinian house in the same way that the Palestinians are in the Israeli house. Any Israeli election is very important to the Palestinians and any Palestinian election is important to the Israelis.For the municipal elections, Israelis should be interested because they will reveal the direction in which Palestinian society is headed. These elections will be the window that the Israeli government and society look through to take the pulse of Palestinian society.