Kerry urges calm, decrease in violence in meeting with Abbas

Abbas told Kerry that the PA leadership was determined to pursue its efforts to seek an international conference for peace in the Middle East. 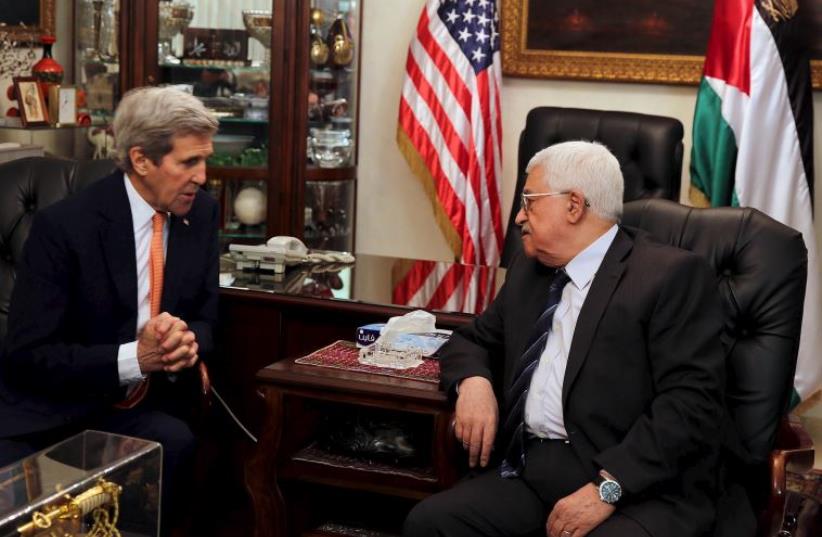 Palestinian President Mahmoud Abbas meets with U.S. Secretary of State John Kerry at Abbas' residence in Amman, Jordan February 21, 2016
(photo credit: REUTERS)
Advertisement
AMMAN  – US Secretary of State John Kerry in talks on Sunday with Palestinian President Mahmoud Abbas urged calm on tensions between Israelis and Palestinians in the West Bank and Jerusalem, and reaffirmed the US commitment to a two-state solution to the conflict.“The secretary continued to urge for calm and a decrease in violence, incitement and inflammatory rhetoric,” State Department spokesman John Kirby said in a statement after the meeting during a visit to Jordan by the top US diplomat.The talks included discussions of tensions at the Temple Mount.Palestinian allegations that Israel is trying to alter the religious status quo at the site have helped fuel months of heightened violence.Kerry stressed the US commitment to seeking a sustainable twostate solution and working with all parties to that end. He reiterated the US policy on the illegitimacy of Israeli settlements.Palestinian leaders say many Palestinian attackers have acted out of desperation in the absence of movement toward creation of an independent state. Israel says they are being incited to violence by their leaders and on social media.Abbas, meanwhile, called on Kerry to intervene with Israel to secure the release of Palestinian detainee Muhammad al-Qiq, who has been on hunger strike for nearly three months.Abbas also told Kerry the PA leadership was determined to pursue its efforts to seek an international conference for peace in the Middle East, according to Nabil Abu Rudaineh, spokesman for the PA presidency.He said the PA leadership would continue its efforts to seek a UN Security Council condemning construction in the settlements and calling for an immediate cessation of building there, Abu Rudaineh said.The PA president also briefed Kerry on his ongoing efforts to form a national unity government that would consist of Hamas and other Palestinian factions and end the division between the West Bank and the Gaza Strip.One Israeli government official said that if the Palestinians were to go through with their threat to bring a resolution to the UN Security Council, “that would be a negative development.”“It is time the international community held Abbas accountable for the incitement that his Palestinian Authority generates, for his failure to condemn terrorism and for his refusal to negotiate with Israel,” the official said. “If the Palestinians are not held accountable for their irresponsible behavior, they will continue with it.”Michael Wilner in Washington and Herb Keinon contributed to this report.