The Palestinian Authority president is appealing to international forums to provide Palestinians with protection. 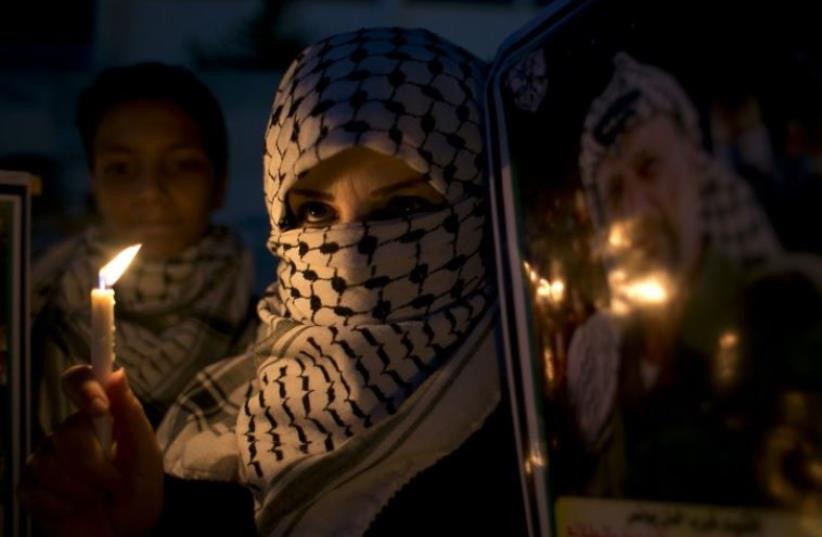 A Palestinian woman holds a candle during a protest in the southern Gaza Strip town of Khan Younis
(photo credit: AFP PHOTO)
Advertisement
Palestinian Authority President Mahmoud Abbas on Thursday accused Israel of deliberately targeting Palestinian youth and children, whom he described as the “defenders of the dream and future generation.”Palestinians are facing a “nakba (catastrophe) that is aimed at uprooting them from their lands and denying their existence,” Abbas said, in a statement on the occasion of Human Rights Day.Palestinians are facing a “fresh assault by the Israeli occupation and its settlers in the frame of their continued aggression against our rights, lands, and Islamic and Christian holy sites,” he said.Israel has arrested more than 10,000 Palestinian children since 2000, Abbas claimed. He also said that 500 Palestinian children were killed during last year’s Operation Protective Edge in the Gaza Strip. Abbas said that 25 out of the 117 Palestinians killed in the current wave of terrorism were children.“Our people will continue the struggle until they achieve their goal of freedom, independence and the [right of] return,” Abbas stressed.He appealed to international forums to provide the Palestinians with protection and hold Israel accountable for its ‘crimes” against Palestinians.PLO Executive Committee member Hanan Ashrawi on Wednesday repeated the charge that Israel is carrying out “extrajudicial executions” of Palestinians and called for an international conference to look into “Israeli violations of international law.”Ashrawi’s accusations came during a meeting in Ramallah with United Nations Special Coordinator for the Middle East Peace Process Nickolay Mladenov.Ashrawi described the situation in the Palestinian territories as “disastrous.”She also accused Israel of using “live and illegal ammunition, illegal settlement activities in and around Jerusalem, home demolitions, and the revocation of Jerusalem [residence] IDs.”Ashrawi said that the Palestinian leadership’s objective “is to keep our people on the land and to counter their vulnerability in the face of Israeli violations and unilateral measures.”It is “imperative for members of the international community to think outside the box and host an international conference with terms of reference, clear criteria and concrete steps and proscriptions against all Israeli violations of international law,” she said.According to Ashrawi, such an initiative would send a “collective message to the Palestinian people that the international community is undertaking its responsibilities toward Palestine and attempting to undo some of the historical injustice that befell the Palestinians since 1947 – the American monopoly over peacemaking has not produced any positive results; rather, it has enabled Israel to persist in its unilateralism, violations and impunity.”She urged the UN to participate in the peace process by implementing its mandate on global peace and security, beginning with a Security Council resolution on all forms of settlement activities and “bringing Israel to compliance with international law and UN resolutions.