On October 1, Mansour published a Facebook post saying that the Palestinian president would be making a mistake in attending Peres’s funeral. 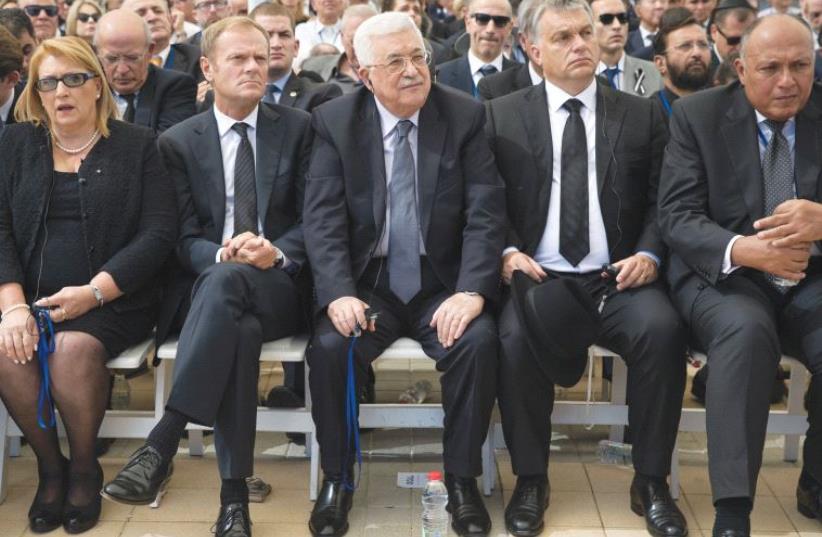 PALESTINIAN AUTHORITY President Mahmoud Abbas attends Shimon Peres’s funeral at Mount Herzl on September 30
(photo credit: REUTERS)
Advertisement
Palestinian Authority President Mahmoud Abbas on Wednesday pardoned the PA security forces officer who denounced his attendance at Shimon Peres’s funeral.“President Mahmoud Abbas issued a presidential decree on Wednesday giving amnesty to officer Osama Mansour ‘Abu Arab,’ and sent him into [early] retirement,” Ma’an, a Palestinian news agency, reported on Wednesday evening.Mansour was an officer in the public relations department of the Palestinian Military Liaison, which is responsible for coordination between the IDF and the PA security forces.On October 1, Mansour published a Facebook post saying that the Palestinian president would be making a mistake in attending Peres’s funeral.“If you decide to participate in the funeral of the killer of our people on your own, you will have made a mistake. If you have decided based on the advice of others, then they have misled you,” the PA officer wrote, adding that there should be “no personal or friendly connection with the occupier, as long as its policies against our people continue.”Hours after the publication of the post, PA Military Intelligence raided Mansour’s home and arrested him.Palestinians on social media condemned the arrest, sharply criticizing the PA.“I defend all clean and honorable persons and attack frantic, powerful regimes that destroy everything for narrow- minded interests,” wrote Fadi Arouri, a young photographer.Reem Oudeh, an online activist, expressed her frustration with the PA, saying, “It has now become natural for the PA to expel anyone who goes against its thinking or policies from their jobs.”On October 3, Mansour issued an apology, stating that he “is fully committed to the law and is specifically subject to the PA security forces’ bylaws,” which do not allow him to undermine the stature of the PA security forces.He also said that he “fully trusts and is proud of the leadership of the commander- in-chief, Mahmoud Abbas.”After holding Mansour for approximately two weeks, a PA military court on Wednesday sentenced him to one year in prison and ousted him from his position.Abbas overturned the ruling hours later, however, issuing a presidential decree to pardon Mansour and send him into early retirement.Hisham Sharabati, an activist and political analyst from Hebron, told The Jerusalem Post that the PA pardoned Mansour to ease tensions on the Palestinian street.“Tensions were already high after Abu Mazen [Abbas] attended Peres’s funeral because most people opposed his attendance, including members of Fatah and the PA. Those tensions became even greater following the PA’s arrest of Mansour, who the vast majority of Palestinians support,” Sharabati said, clarifying, “The PA and Abu Mazen’s advisers finally realized that it had to lessen tensions. Thus, he decided to pardon Mansour.”Moreover, Sharabati said that the arrest and sentencing of Mansour demonstrates a double standard the PA employs with its security personnel.“Many people who work in the security services participate in demonstrations and make posts on social media in support of Abu Mazen and suffer no consequences, while people who criticize Abu Mazen face harsh consequences. The same standard should be applied to everyone, regardless if one supports or opposes Abu Mazen,” he said.The PA has experienced increased criticism in the past two weeks for Abbas’s decision to attend Peres’s funeral.