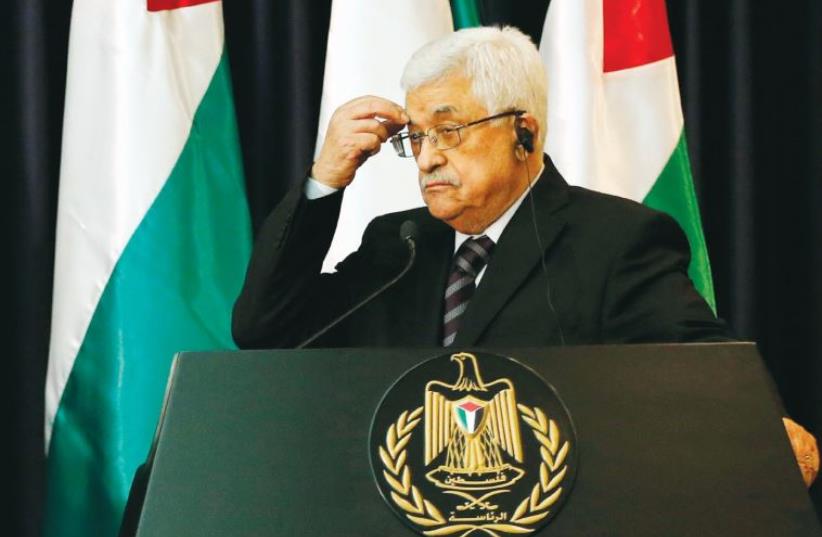 PA President Mahmoud Abbas.
(photo credit: AMMAR AWAD / REUTERS)
Advertisement
The Palestinian Authority has rescinded its decision to close down the offices of the Ramallah-based branch of the Geneva Initiative, the Palestinian Peace Coalition.The decision came following international pressure on the PA leadership, Palestinian sources said.The PPC, a Swiss-funded nongovernmental organization, advocates the establishment of a Palestinian state alongside Israel on the basis of the pre-1967 lines.One of its top leaders is Yasser Abed Rabbo, who until recently served as PLO secretary-general.Last week, Palestinian officials said that PA President Mahmoud Abbas had issued a “presidential decree” ordering the closure of PPC and the seizure of its assets.The decision was seen in the context of Abbas’s efforts to silence his political opponents and critics.Abbas dismissed Abed Rabbo from his post as PLO secretary-general following a lengthy dispute between the two. The dismissal came after Abbas suspected that Abed Rabbo was part of a scheme to undermine the PA president, the officials said.Nidal Fukaha, director of PPC, confirmed that the PA has backtracked on the closure order. He thanked international and local parties that exerted pressure on the PA leadership to rescind the order.Abed Rabbo also confirmed that the PA has rescinded the closure decision. He said that closure decision was unjustified because PPC was an independent organization with no links to the PA.He pointed out that the Swiss government had filed a strong protest with the PA leadership over the decision to close down the PPC.