Abbas to French FM: Only those who 'recognize the state of Israel' allowed in unity government

French foreign minister says that national unity government will likely not include Hamas. 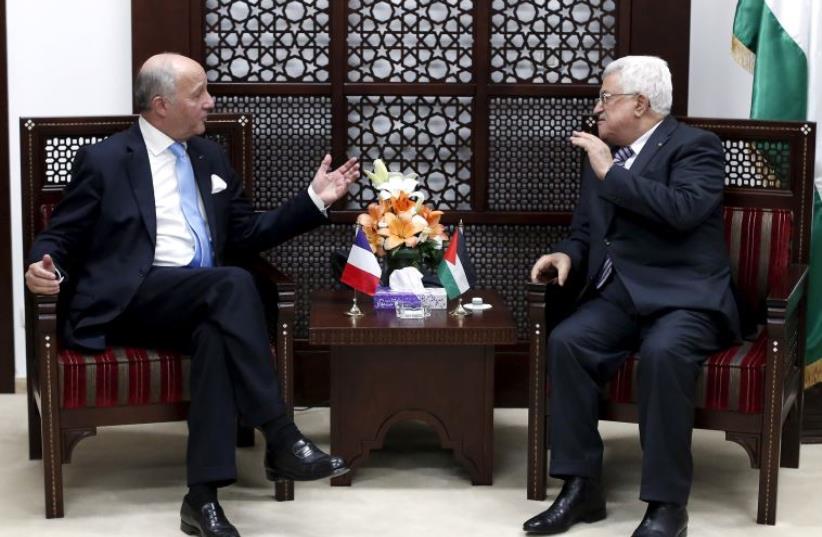 France's Foreign Minister Laurent Fabius (L) gestures as he meets Palestinian President Mahmoud Abbas
(photo credit: REUTERS)
Advertisement
French Foreign Minister Laurent Fabius met with Palestinian Authority president Mahmoud Abbas in Jerusalem in a push to revive peace talks between Israel and the Palestinian Authority, AFP reported on Sunday."[Abbas] told me this government of national unity could only include women and men who recognize Israel, renounce violence and who are in agreement with the principles of the Quartet," Fabius said at a press conference in Ramallah.Fabius noted that these conditions would exclude Hamas from joining a unity government."And that suits us perfectly," he said."We are committed to ideas that will launch the peace process" Abbas was quoted as saying by the Ma'an news agency.Fabius'  visit comes after the collapse of negotiations between the executive committee of the Palestinian Authority on creating a new unity government, as the relationship between Hamas and the Palestinian Authority continues to drift apart.This split between Hamas and the Palestinian Authority comes after Hamas reportedly held separate, indirect talks with Israel.Fabius met with Prime Minister Benjamin Netanyahu on Sunday, who made it clear that Israel expects the Palestinians to “finally recognize Israel as the nation-state of the Jewish people.”In addition, he said any final peace must be anchored in “ironclad security arrangements.” If not, he said, “such a peace will simply not survive and we will not agree to it.”Netanyahu was skeptical of the French-led peace initiative, and said that attempts to impose peace terms on Israel "will fail because first of all Israel will resist it, and secondly because the Palestinians will never agree to negotiate if they think the international community will give them what they want without negotiations.”"Peace will only come from direct negotiations between the parties, without preconditions. It will not come from UN resolutions that are sought to be imposed from the outside," Netanyahu was quoted as saying.Herb Keinon contributed to this report.