PA president is slated to travel to Paris on April 15. 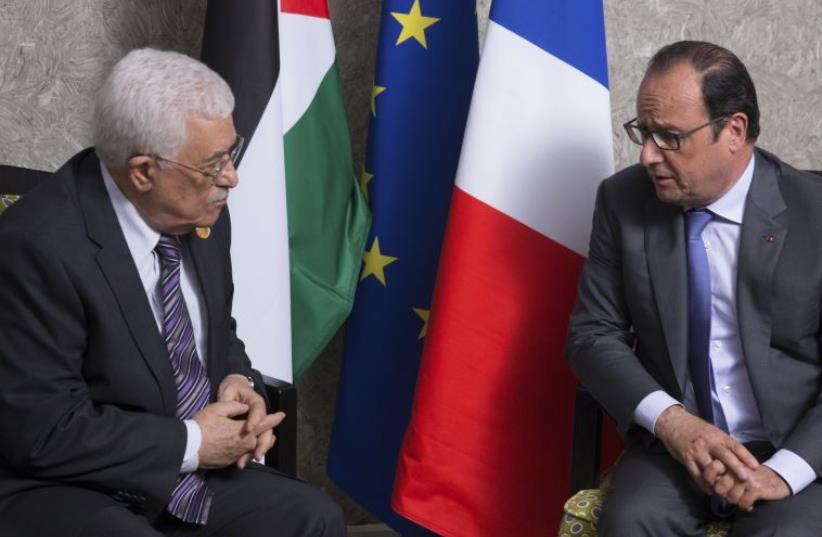 French President Francois Hollande (R) and Palestinian Authority President Mahmoud Abbas meet on the occasion of the inauguration of a new Suez Canal waterway, in Ismailia, Egypt, August 6, 2015
(photo credit: REUTERS)
Advertisement
Palestinian Authority President Mahmoud Abbas will meet French President Francois Hollande in Paris later this month to discuss France’s recent push to restart Israeli-Palestinian peace negotiations.Abbas will have an “important meeting” with Hollande to talk about “convening an international peace conference in accordance with the French initiative,” Palestinian Authority presidential spokesman Nabil Abu Abu Rudeineh told the French news agency AFP on Wednesday.Abbas is due to travel to Paris on April 15, followed by a meeting with President Vladimir Putin of Russia in Moscow to discuss the “evolution of the political situation in Palestine and the region,” Abu Rudeineh said. Abbas will then meet with Chancellor Angela Merkel of Germany in Berlin before heading to New York to attend United Nations meetings.In January, outgoing French Foreign Minister Laurent Fabius originally presented the French initiative, threatening that Paris would formally recognize a Palestinian state should its efforts to renew the peace process fail.“France will engage in the coming weeks in the preparation of an international conference bringing together the parties and their main partners to preserve and achieve the two-state solution,” Fabius told a conference of French diplomats in Paris.While Abbas welcomed the French initiative, Israeli officials blasted the initiative as "an erroneous approach" that gives Palestinian Authority President Mahmoud Abbas an excuse not to negotiate with Prime Minister Benjamin Netanyahu.Israeli officials said Netanyahu would decide whether or not to participate in the conference only after receiving an invitation.