UN resolution will have ramifications for Israel beyond settlements, says ex-Canadian lawmaker. 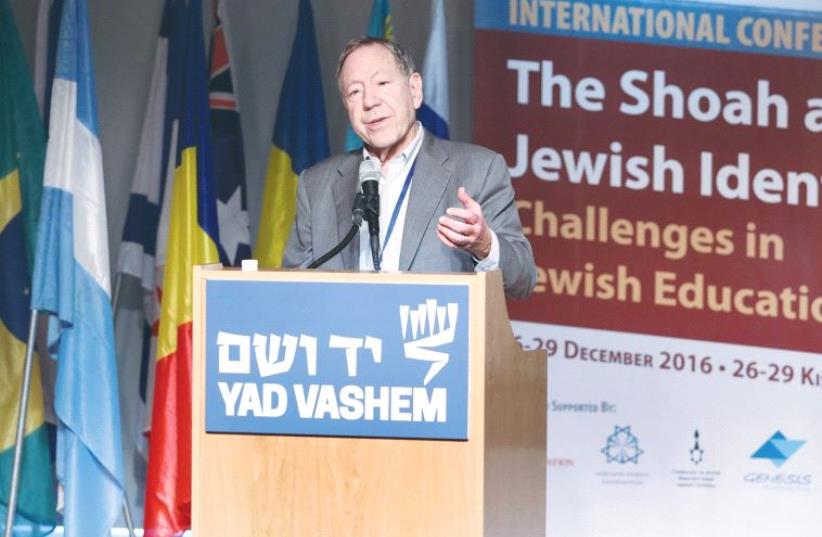 IRWIN COTLER, former Canadian justice minister, attorney-general and parliamentarian, addresses a conference hosted by Yad Vashem’s International School for Holocaust Studies
(photo credit: ISAAC HARARI/YAD VASHEM)
Advertisement
The US abstention on United Nations Security Council Resolution 2334, combined with US Secretary of State John Kerry’s defense of it on Wednesday night, will serve to further distance the prospect of a two-state solution, Jewish leaders said Thursday.“While we appreciate Secretary Kerry’s concern about policies and dynamics that may jeopardize the path to a two-state solution, we are deeply disappointed by elements of his speech and cannot separate it from the US abstention at the UN Security Council,” ADL CEO Jonathan A. Greenblatt said.“Despite Secretary Kerry’s explanation, the US abstention has the potential to set in motion many initiatives that delegitimize and demonize Israel, rather than advancing the peace process.”Greenblatt added that Kerry’s concern about policies that may jeopardize the path to a secure peace “seems to be disconnected from [the] reality that there are two parties involved in this process, both of whom will need to make difficult choices to resolve the conflict.”He said the recent move at the UN, as well as the US abstention and subsequent remarks, will strengthen the belief among Israelis that the Palestinian leadership would prefer symbolic protest and unilateral measures rather than the hard work and difficult choices associated with direct negotiations with Israel.“Further, they reinforce the unhelpful perception that the international community is dictating terms to Israel with the demands of the Palestinians,” he stated.Irwin Cotler, a former Canadian justice minister, attorney-general and parliament member, agreed that the ramifications of the resolution and the speech go far beyond the issue of settlements, which has been the focus of the discussion about the resolution.“I thought Kerry’s speech and the UN Security Council resolution were both focusing on the settlements as if the settlements were the source of all problems,” he told The Jerusalem Post on the sidelines of a conference held at Yad Vashem’s International School for Holocaust Studies Thursday.What concerned Cotler most, however, were comments made by Ben Rhodes, deputy national security adviser for strategic communications.“Ben Rhodes, on the occasion of the US abstention, characterized the resolution as being one with respect to settlements,” Cotler said, pointing out that the resolution addressed far more than that one issue.“This resolution really runs contrary to UN Security Council resolutions 242 and 338, which set the framework and parameters – from the point of view of the Security Council – [for] what the basis for conflict resolution in the Middle East is,” Cotler added.While acknowledging that they did speak about the settlements, he emphasized that they also discussed the importance of security, recognized boundaries, the importance of the status of Jerusalem being determined via direct negotiations and the importance of all Middle East states being free from threats and acts of force.The recently adopted resolution, he said, would serve to further internationalize the conflict, to criminalize Israelis or put them at risk of prosecution at the International Criminal Court.Moreover, he said it effectively makes the pre-Six Day War boundaries “the parameter for conflict resolution; that which was to have been negotiated between the parties as a result of resolutions 242 and 338 is now set forth as an almost precondition for peace.“The very things they [the US administration] claimed they wanted are the very things undermined and diminished by their own actions,” Cotler concluded.American Jewish Congress president Jack Rosen echoed this sentiment, saying, “UN Security Council Resolution 2334 systematically removes Israel’s sovereignty over east Jerusalem, which contains both Judaism’s and Christianity’s holy sites.“Therefore Secretary Kerry’s remarks today, and the condemnation of the UNESCO resolutions over the summer, are inconsistent with his support for UN Security Council [Resolution] 2334, because the operative language of this resolution severs Israel’s sovereignty over east Jerusalem.”Slamming Kerry’s track record, Rosen said his policy decisions with regard to ISIS, Iran and Syria have been “at the least questionable and at the worst wrong.“Based on his record, we have no faith in his Middle East policy decisions. Therefore, we don’t believe that he is right with the policies that he laid out today on the Israeli-Palestinian conflict,” Rosen said, adding that instead of taking action to stop the killing in Syria, the Obama administration is using its remaining time to “single out Israel.”“UN Security Council [Resolution] 2334 dangerously changes the status quo for a path to peace that has existed for many decades, it radically alters American policy and potentially empowers the Palestinians to never have to negotiate and recognize the Jewish State of Israel,” he emphasized.Rosen called for the relocation of the US embassy from Tel Aviv to Jerusalem as a means to “protect Israel” from the resolution.“Having the American embassy and flag planted in east Jerusalem will send a serious statement to the international community and for all those eager to apply UN Security Council [Resolution] 2334 that Jerusalem shall remain Israel proper,” Rosen stated.“It will be extremely difficult to argue that the American embassy is not in Israel.“We express our gratitude to the incoming administration for committing to the moving the embassy, and all that they are doing to address these issues during the transition period,” he added.