After 94 days of hunger strike, Israel to release Palestinian journalist

As soon as he ceases his hunger strike, Muhammad al-Qiq will be permitted to meet with members of his family. 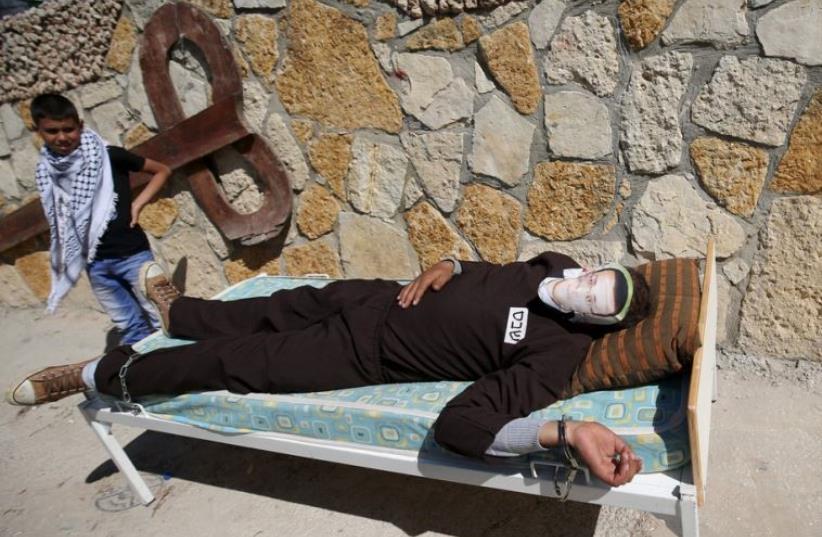 A Palestinian lies on a bed as he covers his face with a picture of Palestinian journalist Mohammad al-Qiq, who was detained by Israeli forces in November and is on an almost-three-month hunger strike
(photo credit: REUTERS)
Advertisement
Palestinian reporter Muhammad al-Qiq, held in administrative detention since November on suspicion of being a member of Hamas, has ended a 94-day hunger strike.Qiq’s decision, announced on Friday by a lawyer outside Emek Medical Center in Afula, where the prisoner had been hospitalized, came after a compromise was reached with Israel regarding his arrest. He was detained on November 21 at his home in Ramallah for terrorist activities connected to Hamas, according to the Shin Bet (Israel Security Agency).Qiq’s family and lawyers said he would remain in the hospital to recover and would be freed at the end of his detention term on May 21, adding that it would not be renewed. However, the IDF said his status would be reviewed “to determine whether there is new information or security circumstances which require extending his detention.”According to the Maan news agency, the head of the Palestinian Prisoner’s Society, Qadura Fares, said Qiq was now permitting doctors to treat him. The 33-year-old had been reported to be facing “immediate death” as a result of his hunger strike.Last month, the hospital’s ethics committee reached a decision to permit forced treatment on Qiq, a decision met by outrage from the Palestinian leadership.The Supreme Court said last week that Qiq was suspected of involvement in terrorist activity and contacts with Hamas operatives in Gaza.“He is, in short, clearly a Hamas activist involved in militant terrorism,” the court said after reviewing classified information.Palestinian officials said the father of two, employed by the Saudi-owned Al-Majd Television, was being hounded for political reasons. Israel has never produced specific charges against him.Last week, the United Nations, EU and rights groups expressed concern about Qiq and denounced the practice of administrative detention. Israel says detention without trial is essential in preventing further violence in cases where there is insufficient evidence to prosecute, or where going to court would risk exposing the identity of secret informants.Palestinian factions and officials hailed the deal reached on Friday as “a victory against Israel’s administrative detention policy.”There are currently 600 Palestinians being held in administrative detention, according to the Prisons Service.Jerusalem Post staff and Reuters contributed to this report.