After attack, Israeli chief rabbi says terrorists should be killed on spot

“It’s shame they didn’t kill this terrorist, they should have killed him.” 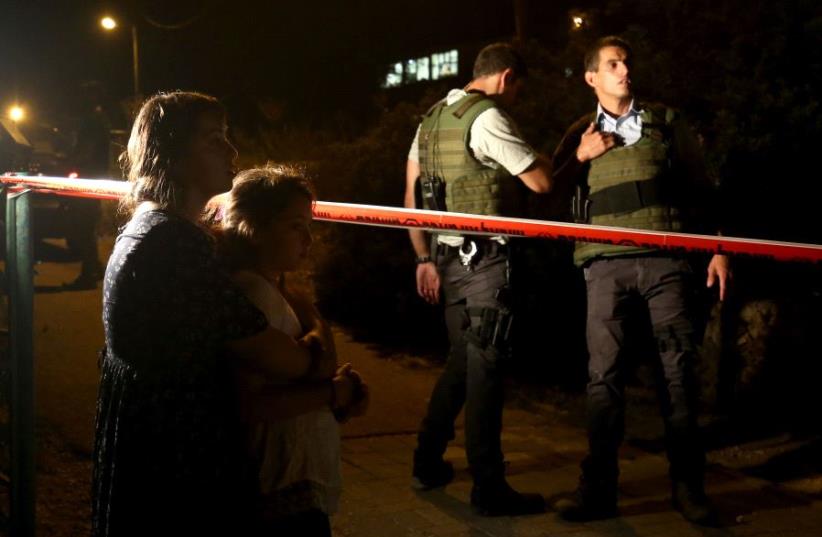 Israeli comfort each others outside the home, where a Palestinian broke in the day before and stabbed four Israelis killing three of them, in the Jewish settlement Neve Tsuf (Halamish), in the West Bank, on July 22, 2017
(photo credit: GALI TIBBON / AFP)
Advertisement
Chief Rabbi Yitzhak Yosef reiterated on Saturday night that terrorists who commit an attack should be killed on the spot. The rabbi was giving his weekly Torah lesson which he dedicated to the victims of the brutal terror attack in Halamish on Friday night. Palestinian terrorist Omer al-Abed, 19, entered a home in the West Bank, and began stabbing members of the Salomon family, who were having Shabbat dinner. He murdered Yosef Salomon, 70, and his children Chaya, 46, and Elad, 36, who was celebrating the birth of his fifth child. He also severely injured Yosef’s wife Tovah, who remains hospitalized. An IDF soldier who lived nearby shot and wounded al-Abed before he was able to continue the massacre.
Scene of terror attack in Halamish (ZAKA)
“It’s shame they didn’t kill this terrorist, they should have killed him,” commented Yosef. “God forbid, any Arab terrorist who comes to kill must not return alive,” said Yosef simply.“He’s coming to harm the Jewish people - he needs to be killed, not wounded.”This is not the first time the chief rabbi has made such comments. In 2016 he iterated similar remarks. “If a terrorist is advancing with a knife, it’s a mitzva [commandment] to kill him,” said Yosef in March last year.“One shouldn’t be afraid that someone will petition the High Court of Justice or some [army] chief of staff will come and say something different.“There is no need to be afraid. ‘He who comes to kill you, get up and kill him,’” continued Yosef, citing the rabbinic dictum of self-defense.
Chief Rabbi Yitzhak Yosef (Marc Israel Sellem)
That time, however, Yosef stressed that a murderous attacker who no longer has a weapon should not be killed, but rather put in prison for the rest of his life.