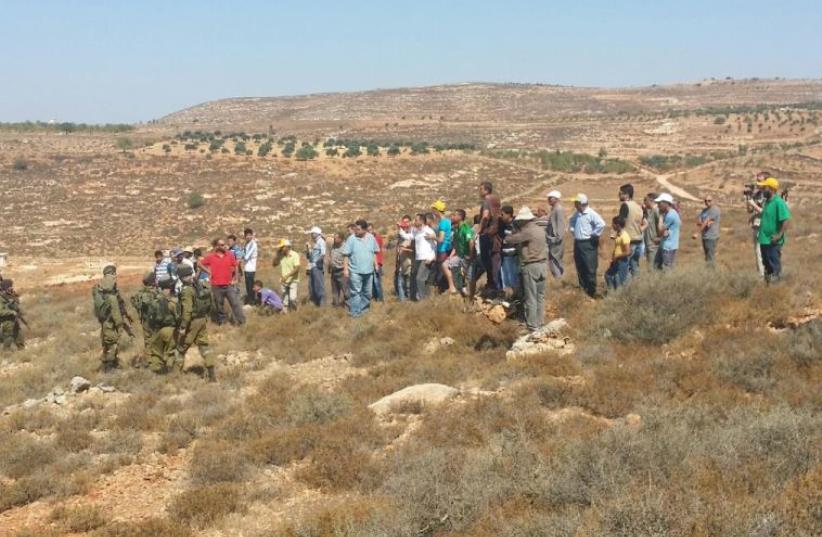 Scene of settler fight with Palestinians near Esh Kodesh, August 1, 2015
(photo credit: TAZPIT)
Advertisement
A fight between settlers and Palestinians, a series of clashes between Palestinian rioters and the IDF, and disturbances in Jerusalem have followed the deadly arson attack by suspected far-right Jewish elements on a Palestinian home on Friday in which a baby was burned alive. West Bank settlers clashed with Palestinians and left-wing activists near the settlement outpost of Esh Kodesh and the Palestinian village of Kusra on Saturday morning. IDF forces came to the scene to break up the fight.The two groups threw stones at each other and when the IDF soldiers arrived, rioters pelted them with stones as well, the IDF said. There were approximately 15 settlers and 40 activists involved in the skirmish, Israel Radio reported. According to the report, the issue of ownership rights to land is the point of friction that led to the fight on Saturday.
Clashes in Esh Kodesh
Palestinian sources claim that settlers attacked a Palestinian-run tractor that was working the fields of Kusra and the settlers reported that the Palestinians burned vineyards planted by the settlers from the Esh Kodesh outpost, Israel Radio reported.There were no reported injuries in the incident. (Video: Fight in Esh Kodesh/Kusra, Credit: Tazpit) In  a separate incident, in Kadum, in Samaria, some 100 Palestinians hurled rocks and burning tires at security forces, who responded with riot dispersal means and fired Ruger rifle rounds. One Palestinian was shot and injured in the clash. His condition is not known to the army, an IDF spokeswoman said. In Kalandiya, 50 Palestinians hurled rocks at Border Police and burned tires. Officers fired Ruger rifle rounds and dispersed the riot. There were no injuries in that clash, an army spokeswoman said. In Khalkhoul, near Hebron, 30 Palestinians hurled rocks and tires at soldiers, who responded with riot dispersal means and fired Ruger rounds. Four Palestinians sustained light injuries in that attack. Also on Friday, a Palestinian suspect approached a military lookout tower in Birzeit, near Ramallah, and hurled a Molotov cocktail at soldiers. They opened fire on the suspect with live ammunition. He was shot and injured, and evacuated to a Palestinian hospital by the Red Crescent. According to Palestinian reports, the Molotov cocktail thrower died of his injuries. On the border with the Gaza Strip, meanwhile, two groups of Palestinians approached the border with Israel, ignoring calls by soldiers to turn back, an army spokeswoman said, resulting in shots fired by security forces. In the first incident, two Palestinians approached the border fence from northern Gaza, and ignored IDF calls to stop their advance. Soldiers fired warning shots in the air, and when the suspects ignored that too, they fired at one of the suspect's legs, striking him, the spokeswoman added. The two suspects then turned back. Shortly afterwards, five Palestinians approached the border fence and hurled rocks at soldiers. Security forces fired in the air, and when that failed to stop the riot, soldiers fired at the legs of one of the suspects, hitting him. All five then withdrew, the IDF added. Palestinian sources later said one Gazan was killed and a second seriously injured in those incidents.  Earlier on Friday, a Palestinian terrorist carried out a drive-by shooting attack on an Israeli vehicle in the Binyamin region of the West Bank near Kohav Hashahar. The Israeli driver in the vehicle told the army he fired back at the gunman. There were no injuries in the incident. The army found three bullet holes in the Israeli vehicle that came under fire. Also on Friday,  Palestinian rioters clashed with IDF soldiers in Hebron after prayers. The incident occurred near the Al-Rasoul Mosque, when Palestinians on a march hurled rocks and burning tires at security forces in the area. Soldiers responded with riot dispersal means, and fired Ruger low intensity rounds at the legs of a suspect, an army spokeswoman said. He sustained a light injury, the spokeswoman added. Police also reported violence in Jerusalem overnight on Friday. In the Shuafat refugee camp in Jerusalem, Palestinians threw firebombs and stones at security forces. Two police officers were lightly injured by stones and the rioters were dispersed.  In the Muslim Quarter of the Old City in the capital stones were thrown and fire crackers were directed at police.  There was also an incident of a firebomb being thrown into a garden on Meir Neker street in the capital and rocks being thrown at a vehicle travelling on Moshe Zacks street. Stones were also thrown at the "Shiva House" in the Beit Hanina neighborhood, police said. Earlier in the day, in response to the deadly arson attack that killed a Palestinian baby and severely injured his brother and parents,  IDF Chief of Staff Lt.-Gen. Gadi Eisenkot held a special security evaluation meeting with Shin Bet head Yoram Cohen and the military's Central territorial Command chief, Maj.-Gen. Roni Numa, as well as other senior security officials.Eisenkot condemned the attack, and ordered a series of steps to increase IDF preparations in Judea and Samaria and the prevention of a possible security deterioration. The steps are aimed at preventing friction between Palestinians and Israelis, and safeguarding regional stability.The IDF deployed four battalions to the West Bank in an attempt to maintain stability in the region and respond to potential widespread disturbances. Two infantry brigades, Nahal and Givati, have stopped training activities and returned to their bases, where they are on stand by, IDF Spokesman Brig.-Gen. Moti Almoz added.These steps reflect the IDF's concerns over the potential of the attack to undermine security stability, he said."We have to prepare for incidents, and for what may occur on the Temple Mount. Tensions in the past two weeks in Judea and Samaria all drain into this most severe incident. We are coordinating with PA security forces to calm the area," Almoz said.