Omar Shakir, a US citizen, received the work visa on arrival at Ben-Gurion Airport and he will take up his position as Human Rights Watch's regional director. 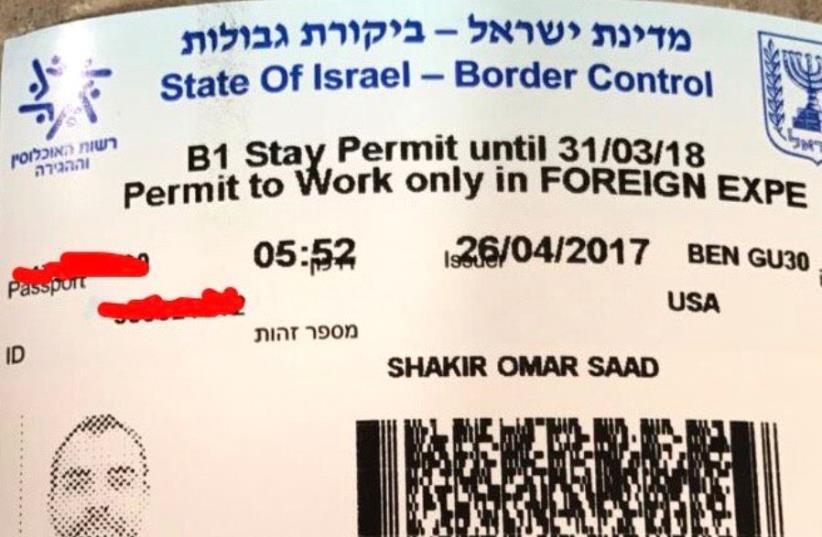 Work permit granted by Israel to Human Rights Watch official Omar Shakir, April 26, 2017
(photo credit: TWITTER/OMAR SHAKIR)
Advertisement
Israel gave a one-year work visa to a Human Rights Watch researcher on Wednesday after initially denying him a permit and accusing the organization of engaging in "Palestinian propaganda," the group said.The decision in February to deny Omar Shakir a work permit was criticized by the United States.Shakir, a US citizen, received the visa on arrival at Tel Aviv's Ben-Gurion airport and he will take up his position as the New York-based group's "Israel and Palestine" director.
Bill banning boycotters , anti-Israel activists from visiting Israel becomes a law after Knesset approval on March 6, 2017 (credit: REUTERS/KNESSET CHANNEL)
"We welcome this opportunity to work in Israel and Palestine alongside vigorous national human rights organizations," Iain Levine, executive deputy director for program at Human Rights Watch, said in a statement on the group's website."Israeli authorities do not always agree with our findings, but, in facilitating the ability of our staff to carry out our research and documentation, they have taken an important step to safeguard the principle of transparency and demonstrate their openness to criticism."Foreign Ministry spokesman Emmanuel Nahshon said in February that the decision to deny Shakir a work permit stemmed from HRW's work "at the service of Palestinian propaganda."But he also said the application may be reconsidered if an appeal was lodged, and Shakir was allowed to enter Israel on a tourist visa on March 6 for a 10-day stay. Final approval for a one-year permit was given on April 20, HRW said.The US State Department said after Shakir was banned that it strongly disagreed with Israel's characterization of the group, which it considers a credible human rights organization.In its statement, HRW said it has had regular access to Israel and the West Bank for nearly three decades, with staff and offices in Jerusalem, Ramallah, and Gaza for much of this period. It said that since 2008, Israel has refused it access to Gaza, which is run by Hamas Islamists, except for one visit in 2016.