With the murder of four Israelis at Tel Aviv's Sarona Market, the true test of the new defense minister begins. 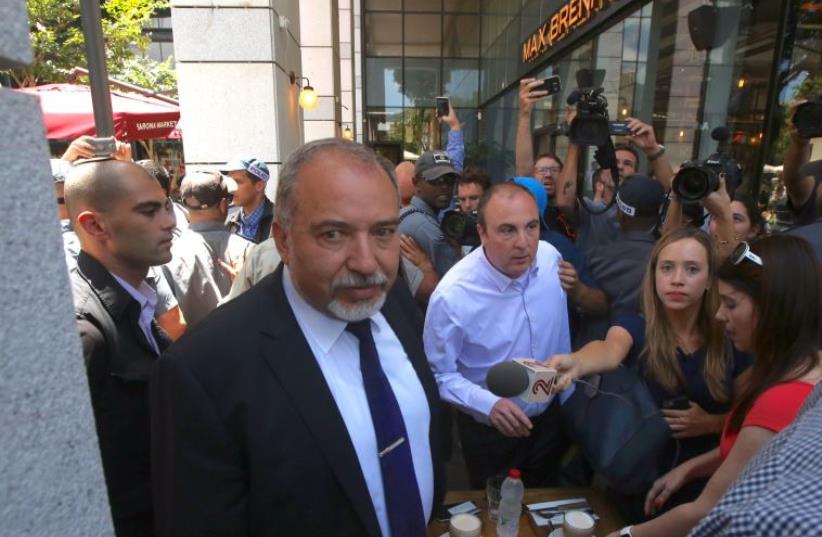 Defense Minister Avigdor Liberman visits scene of Tel Aviv terror attack
(photo credit: MARC ISRAEL SELLEM/THE JERUSALEM POST)
Advertisement
Wednesday night's terror attack in Tel Aviv was the deadliest single event in terms of casualties that has taken place since the beginning of the current wave of violence in September 2015.
In the nine months since the beginning of the terror wave, 38 Israelis and foreign tourists have been killed. The latest terror attack seems to have been very ambitious and well-planned. The terrorists were dressed to blend in with the crowd and were relatively calm and collected, lending to the large number of victims. However, there is nothing to suggest that the attack at the Sarona Market signals a new trend in the current terror wave.
The attack is being investigated by the Shin Bet (Israel Security Agency), so it is difficult to draw clear conclusions. There are, however, signs that reinforce the assumption that this attack has similar characteristics to previous attacks in this terror wave. The two suspects are from a  village in the South Hebron district. They have no past security record. They used a type of improvised submachinegun known as "Carlo," which has also been used in a number of previous terror attacks. This is because the standard weapons are held by the Palestinian Authority's security services, who have not joined in the wave of terror and it is difficult to obtain standard weapons on the black market.
The village and the majority of south Hebron are known to be Hamas strongholds and there are even pockets of support for the Salafi doctrine of global jihad groups such as al-Qaida and Islamic State. Several terrorists have come from the same area in the past.
Hamas leader in Gaza Ismail Haniyeh praised the attack on his Twitter account, but despite their satisfaction with the events, the group did not claim responsibility for the attack. The suspects likely needed the assistance of at least one accomplice who transported them and helped them infiltrate Tel Aviv.
The attack in Tel Aviv is also the first test for Defense Minister Avigdor Liberman, who has limited his declarations and focused mainly on meeting with senior security officials and getting up to speed on his new area of responsibility since taking over the job two weeks ago. The few statements made by Liberman have been moderate and quite different from the aggressive remarks that characterized his time as a member of the opposition.
The defense establishment's policy thus far has been to differentiate between terrorists and the whole Palestinian population by allowing the public to continue leading their lives normally.
Therefore the IDF has avoided using collective punishment: seldom has it instituted closures on Palestinian towns and villages and it continues to allow some 100,000 Palestinians to work legally within the Green Line and in the settlements. Tens of thousands of Palestinians illegally work in Israel as well.
The Shin Bet and IDF's coordination with the Palestinian Authority's security apparatus has also contributed to the fact the terror has not spread or become entrenched in the greater population and is still limited to a small number of lone wolves, most of whom were not armed with guns.
The question that Liberman now faces is whether or not he wants to continue this policy, put in place by his predecessor Moshe Ya'alon, with the backing of Prime Minister Benjamin Netanyahu and the cabinet, or to shake things up and institute a new policy.
On Thursday morning, after consultations with Netanyahu, Liberman, Public Security Minister Gilad Erdan and defense officials, the Coordinator of Government Activities in the Palestinian Territories, Maj.-Gen. Yoav Mordechai, announced a number of preventative measures, which included various restrictions.
204 work permits for family members of the terrorists were canceled and 83,000 permits for West Bank residents to visit in Israel for the Ramadan holiday were frozen. In addition, the privilege of those Gaza residents allowed to exit the enclave to pray at the Temple Mount was revoked.
These steps show that the defense establishment is not rushing to institute a new policy, but rather is entering a holding pattern to see how events develop. The fact that stands out is that Palestinians have not been forbidden from working in Israel. This is the main tool being used in the effort to prevent the terror from spreading to the general population.