Amnesty statement came one day after one of the bloodiest days in recent memory. 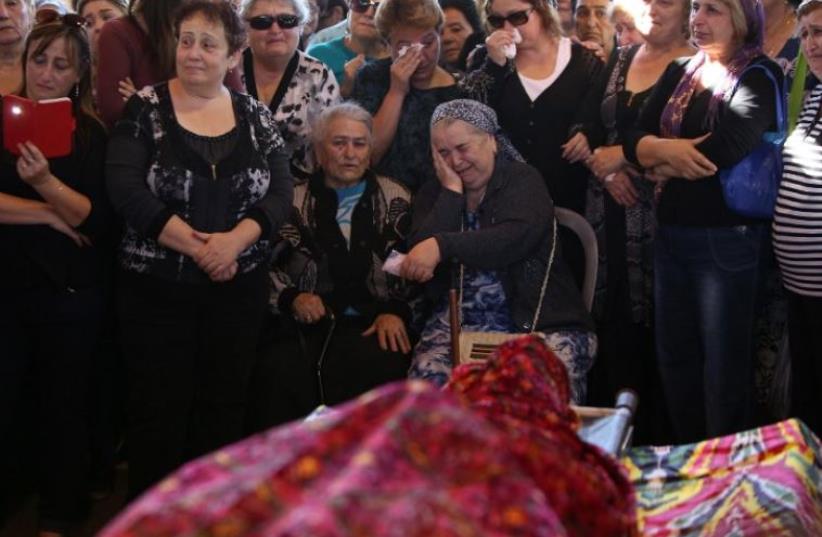 Relatives and friends mourn during the funeral of Reuven Aviram, 51, who died during an stabbing attack in Tel Aviv, November 19, 2015
(photo credit: AFP PHOTO)
Advertisement
The US-based human rights group Amnesty International on Friday condemned the recent wave of Palestinian terrorist attacks against Israeli civilians on both sides of the Green Line.The organization, which has been one of Israel's most consistent critics of its policies toward the Palestinians, issued a statement to the press on Friday outlining its position."There can be no justification for a spate of deliberate deadly attacks by Palestinians on civilians over the past week in Israel and the occupied Palestinian territories which displayed a clear contempt for human life," the organization said.A Palestinian terrorist armed with a knife murdered two Israelis and moderately wounded a third during a rampage in a southern Tel Aviv office building on Thursday afternoon.The victims were named as Aviram Reuven, 51, from Ramle, and Aharon Yisayev, 32, from Holon.Just hours later, a Palestinian terrorist driving through the Gush Etzion junction opened fire with an automatic rifle at a line of cars before ramming a vehicle with his car, killing an Israeli, an American yeshiva student, and a Palestinian. Security forces surrounded the terrorist and arrested him. Seven others were wounded in the attack.“As tensions continue to skyrocket we have seen a string of reprehensible attacks by Palestinians on Israeli civilians over the past week in which the assailants appear to have sought to kill individuals they presumed to be Israeli Jews,” said Philip Luther, Director of the Middle East and North Africa Program at Amnesty International.“Deliberately attacking civilians is contrary to one of the most fundamental principles of international law and can never be justified. Both the Israeli and Palestinian authorities must ensure they take measures, in line with their obligations under international human rights law, to protect the right to life and to bring to justice in fair trials those responsible for such attacks."Amnesty also took Israel to task for its policies of retribution, including house demolitions and "extrajudicial executions.""Amnesty International has also documented a pattern of unlawful killings, including extrajudicial executions, by Israeli forces against Palestinian civilians and a series of attacks by Israeli settlers on Palestinian civilians and homes over the past two months," the group said."Israel must also end practices such as house demolition which collectively punish the wider Palestinian population.”