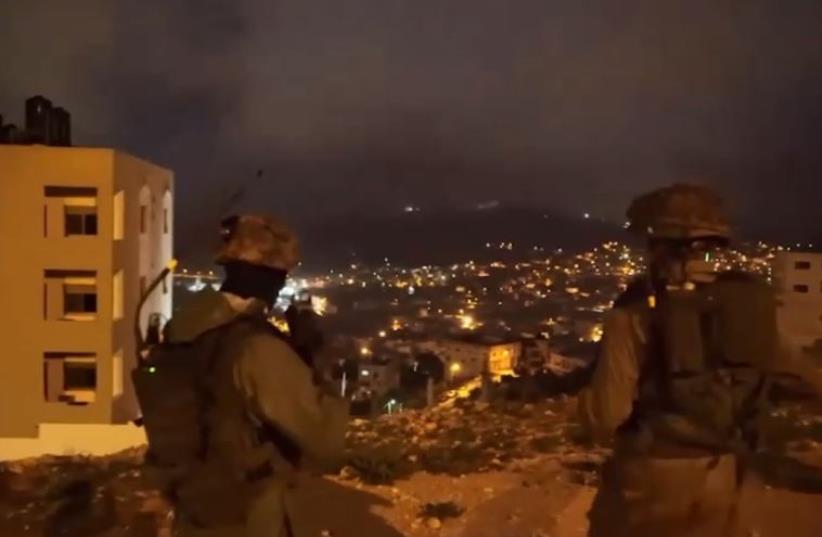 IDF seizes illegal weapons in West Bank raid
(photo credit: screenshot)
Advertisement
Amnesty International on Tuesday said the IDF’s administrative detention “balloon… is popping over and over” and called on Israel to release Palestinian prisoner Mahmoud al-Fasfas from the special procedure that replaces a full criminal trial under which he is being held.Amnesty argued that a number of recent instances in which the state has buckled and released detainees under the pressure of their hunger strikes, has exposed “the bankruptcy of the administrative detention tactic.”It insisted that al-Fasfas, who was detained in October and started a hunger strike on February 20, be released and that, in the future, Palestinians who are arrested be brought to trial under the regular criminal process without the secret evidence and indefinite detention periods that come into play in administrative detention.On March 10, al-Fasfas’s detainment was extended for at least four more months by the Judea Military Court.As of press time, neither the IDF nor Amnesty International had provided details regarding the grounds for his detention.Amnesty said the February agreement by Israel to release Palestinian journalist Muhammad al-Qiq from administrative detention in May in exchange for him ending his hunger strike, as well as others, is a sign that the state is not willing to let hunger striking detainees die.Therefore, Amnesty said al-Fasfas and others should be released earlier rather than just making them suffer by delaying their eventual and inevitable release.One issue that has been lost in the recent release agreements is that the Knesset passed a forced-feeding law to allow it to feed hunger-striking detainees so as to avoid having to make deals but that it is not using the law.A primary reason for this may be the High Court of Justice’s recent game-changing rulings on the controversy.The High Court has created a new category of ruling for administrative detention – suspending the detention due to health reasons, without extending, reducing or terminating the detainment – the only actions it had ever previously taken.Many observers viewed its rulings as having little impact because the hunger strikers ignored the temporary suspension and continued hunger striking until the state promised a full release.However, The Jerusalem Post has learned that Israel may view these rulings as having thrown the entire legal structure underpinning the forced-feeding law into uncertainty, potentially even making the law irrelevant.According to this view, suspending administrative detention removes detainees from the definition of “prisoner” and since the forced-feeding law is only applicable to “prisoners,” suspending detention may make the new law inapplicable.This would indicate that the state may not yet have figured out a new strategy for dealing with hunger-striking detainees now that it must face the possibility of the High Court regularly rendering the forced-feeding law as unusable.Furthermore, this view recognizes that in 2014, Israel did not buckle or cut deals despite a large number of hunger-striking detainees, and that the state may simply take different positions at different times based on the number of hunger-striking detainees and the relative level of threat they present.Nevertheless, Amnesty’s Israel CEO Yonatan Gar said: “The reality in which the norm is that a person is guilty until proven otherwise cannot continue.Israel cannot play with the fate of human beings and jail hundreds of people without trial” under regular criminal procedures.