Leaders of Arab states, like many other observers, may not be sure exactly what to make of Trump’s remarks during his press conference. 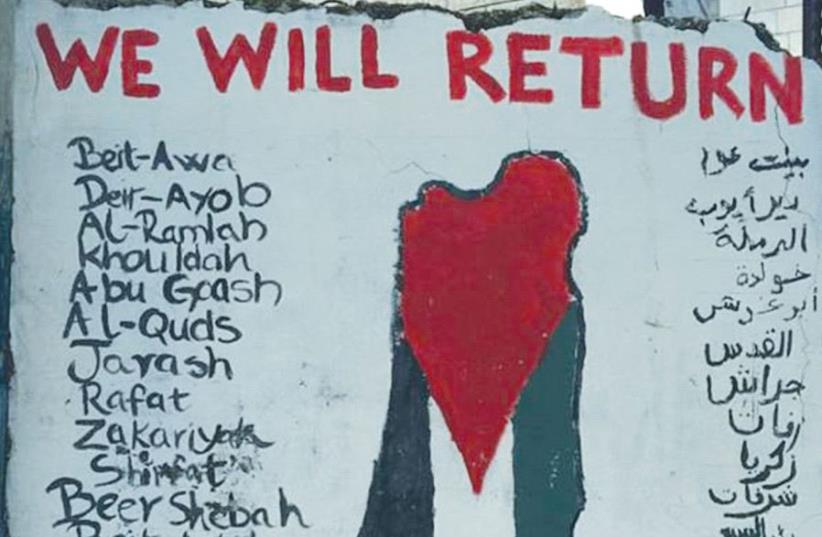 GRAFFITI REPORTEDLY seen in a Palestinian refugee camp advocates a very different ‘one-state solution’
(photo credit: FACEBOOK)
Advertisement
Although seen by Palestinians as very dangerous, Donald Trump’s appearance of backing away from long-standing US support for a two-state solution to the Israeli-Palestinian conflict is likely to elicit only a restrained reaction among Arab states – at least initially.For one thing, leaders of Arab states, like many other observers, may not be sure exactly what to make of Trump’s remarks during his press conference Wednesday with Prime Minister Benjamin Netanyahu, in which he said either a oneor a two-state solution was acceptable, provided the Israelis and Palestinians agreed on it. Before doing anything that could risk raising the temperatures in what are delicate relations with a new administration, they will want to gauge whether Trump is really intent on ditching what has been a cornerstone of US policy.“Egypt, Saudi Arabia and Jordan have good reasons to cozy up to Trump. They’ll want clarifications but they will be very low key about all this,” said Prof. Bruce Maddy-Weitzman, a Middle East specialist at Tel Aviv University’s Dayan Center for Middle Eastern and African Studies.After the Palestinians, Jordan is probably the most concerned about any possible US shift away from the two-state solution. With most its citizens of Palestinian origin, Amman fears that escalation of tensions among Palestinians in the West Bank could spread into Jordan. Its nightmare scenario is that in the absence of a two-state solution Israel could, under circumstances of war, expel Palestinians to the East Bank, threatening the existence of the Hashemite monarchy.Moreover, even short of outright expulsions, if Israel annexes the West Bank and seeks to maintain Palestinians there permanently in some sort of subordinate fashion, the Jordanian regime will find it nearly impossible to explain to its population why it is maintaining its peace treaty with Israel, which is already unpopular.But despite its edginess, Jordan is too dependent on the goodwill of the Trump administration to get into a confrontation with it over the Palestinian issue and is likely to rely on quiet persuasion efforts instead.Struggling to absorb an influx of refugees from Syria and with a troubled economy beset by soaring youth unemployment, it desperately needs US economic aid. It also needs US support in ensuring it can maintain stability in the face of threats from ISIS and spillover from the civil wars in Iraq and Syria.Saudi Arabia also has a considerable stake in the two-state solution, as formulator of the Arab Peace Initiative that calls for establishment of a Palestinian state alongside Israel and an Israeli withdrawal to pre-1967 borders. Despite Netanyahu’s repeated stress – including during the press conference with Trump – that Gulf countries are “newfound partners” with Israel, in fact, the Saudis have made clear they will not openly normalize relations with Israel without progress toward Palestinian statehood.The Saudis are pinning high hopes on Trump. They, too, do not want to get into a confrontation with his administration over the Palestinian issue. Their policies are viewed largely through the lens of their rivalry with Iran for regional primacy.Their main interest is to be certain the Trump administration will maintain the tougher posture it has staked out vis-a-vis Tehran and back them against Iran.Egypt also does not want anything to ruffle what it believes is a promising relationship with the Trump administration. President Abdel Fattah al-Sisi was among the first world leaders to congratulate Trump on his electoral victory, viewing him as someone who would support his hard-hitting approach to the Muslim Brotherhood, without raising human rights objections as the Obama administration did.Sisi wants more security assistance and an improvement in economic relations, including a free-trade agreement.“Sisi wants the US to define the struggle against terror as being less about Iran and more about things concerning Egyptian national security, like the struggle against jihadists in Sinai, Islamic State and the Muslim Brothers. He wants the US to designate the Muslim Brothers as a terrorist organization,” said Ofir Winter, an Egypt specialist at the Institute for National Security Studies in Tel Aviv.At the press conference, Trump termed the idea of a regional peace deal that would take in many countries a “terrific thing.”In this, Egypt may see an opportunity to become an asset to the US, Winter said.“Egypt can market itself as a partner of the US for a regional process as a country that can help mediate for the US to bridge between Israel and the Palestinians, between Israel and the Arab world, between Fatah and Hamas,” he said.But he stressed it is unlikely Egypt will act as a sponsor for a process that does not explicitly support a two-state solution. Doing so would be seen as selling out the Palestinians and would go against Egypt’s long-standing efforts to advance the Arab peace initiative.“They will try to persuade the US to stick to the two-state solution and to influence the outline for a regional initiative so that it is close to the two-state solution,” Winter said.