The planned 42 kilometers represents just a fraction of the 320 kilometers in "gaps" in the West Bank security barrier. 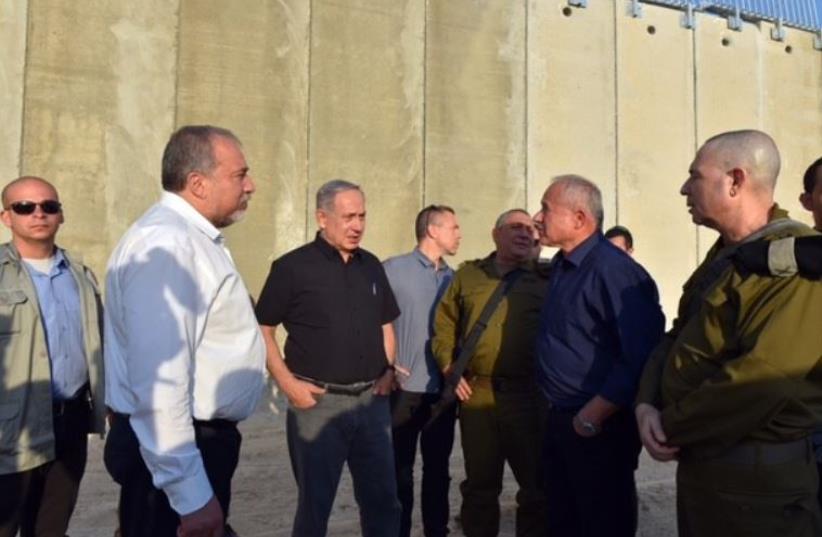 Prime Minister Benjamin Netanyahu and Defense Minister Avigdor Liberman at security barrier in Tarkumia
(photo credit: ARIEL HERMONI / DEFENSE MINISTRY)
Advertisement
Prime Minister Benjamin Netanyahu’s pledge Wednesday to complete 42 kilometers of the West Bank security barrier in the area of the South Hebron Hills does little to stop Palestinians from executing terror attacks against Israelis.That’s because the abandoned South Hebron Hills section of the barrier that Netanyahu visited on Wednesday, which mostly hugs the Green Line, represents just a fraction of the 320 kilometer “gaps” in the West Bank security barrier.It doesn’t even complete the stretch of the barrier that winds from Beersheba, through the South Hebron Hills and onward to Jerusalem.If the 42 kilometers in the South Hebron Hills are completed within a year as promised, the barrier would reach the edge of the Gush Etzion region of the West Bank and then stop, thereby leaving at least an 11 kilometer gap between the barrier and Jerusalem. The barrier around Jerusalem, is also, incomplete.True, Netanyahu looked tough, as he struck the classic prime ministerial poses that show he means business when it comes to safeguarding Israelis lives.He abandoned the suit, to show that he was in working mode. He flew in a helicopter, studied a map of the barrier and peered through the helicopter window to study the terrain.He and Defense Minister Avigdor Liberman, who accompanied him, described a plan that would involve rebuilding sections of the barrier in the South Hebron Hills that had fallen into disrepair.“It’s clear,” Netanyahu said, “that this project will be completed. It is important for the security of the citizens of Israel and the state of Israel.”But for settlers, who watched work on the barrier grind to almost a complete halt in 2007, as the Defense Ministry spent its funds on higher priority needs, the idea of its completion is anything but clear.The project is not just about building a physical barrier, explained Shlomo Vaknin who is in charge of security for the Council of Jewish Communities of Judea and Samaria. For it to be successful, the IDF must continually monitor the structure, Vaknin said.That kind of operational mission has not been maintained, he charged. There are places throughout the West Bank, where Palestinians can easily cross over it, because no one is watching, he said.In the South Hebron Hills settlers noted that the barrier, if maintained, could prevent Palestinians from easily accessing Beersheba or Ashkelon.But it would not stop them for executing attacks, they said. Nor would it impact security issues in their area, because they are outside the barrier’s route. They are in danger from Palestinian terrorists who live near them and who do not have to cross any barriers in order to execute attacks. The same is true for nearby the nearby Kiryat Arba settlement.In Gush Etzion, where a properly maintained barrier would halt terror attacks, the settlers have opposed the construction of such a fence.The attacks over the last nine months that have killed five people at the Gush Etzion junction alone, has not changed their minds on this score.Efrat Council head Oded Revivi said that talking about “completing the barrier” as if it were a simple action, eased people’s minds psychologically, but did little in practice to provide security.Even if it did stop terrorists attacks with knives, guns and bombs, he said, those bent on killing Israelis would simply find another way to do it.Just look at what happened in Gaza, he said. The IDF built a barrier to stop terrorist attacks, he said. In response, he said, terrorist built rockets that flew over the fence. Israel than placed a missile defense system in the south and the terrorists, in response, began digging tunnels underground.Opposition leader Isaac Herzog, who has called for the completion of the barrier, particularly around the settlement blocs, like Gush Etzion, has said that such a structure has a critical role to play in simply separating Israelis and Palestinians.But in Efrat, where the barrier is slated to run through a section of the settlement, separation is the last thing that some of its residents want.“I would put my effort into building bridges with our Arab neighbors, instead of building fence,” Revivi said.