Analysis: Is an Israeli-Syrian military conflict on the horizon?

The firing of two missiles at Israeli aircraft bears witness to the growing confidence of Assad's army. 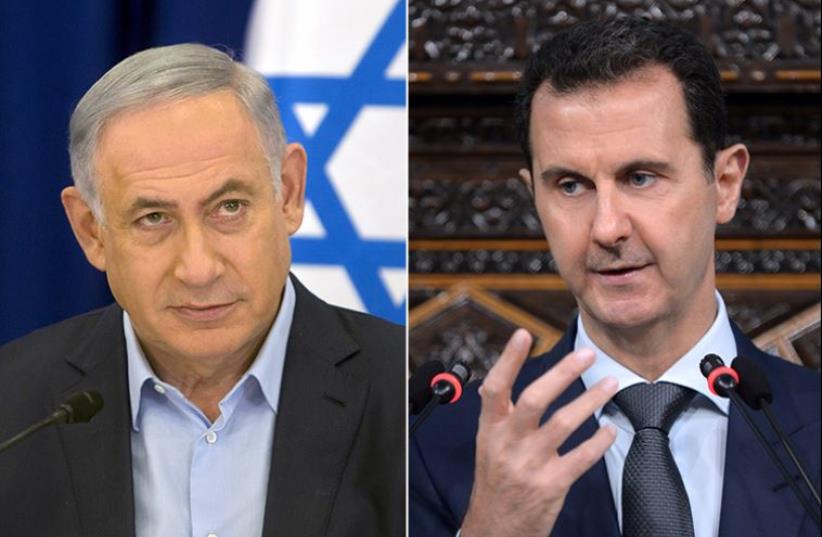 Netanyahu and Assad
(photo credit: REUTERS)
Advertisement
The firing of two missiles at Israeli aircraft bears witness to the growing confidence of Assad’s army.It is still too soon to determine whether the Syrian Army’s firing of missiles at IAF aircraft before dawn on Tuesday signifies a policy shift by the Assad regime regarding Israeli military activity in the area.This determination will better be made if similar fire is carried out the next time the IAF or IDF gunners attack in response to mortar shells or artillery fire that land in Israeli territory.However, one thing is already clear: The firing of two S-200 surface-to-air missiles in the Quneitra region was not a coincidence. The Syrian Army released an official statement on the incident.This is the first known instance of Assad’s army retaliating to Israeli military activity in Syrian territory since the country’s civil war began some five-and-a-half years ago.For the past several years, according to foreign media, the IAF has acted unmolested in Syrian airspace in violation of Syria’s sovereignty and the March 1974 Disengagement Agreement that the two countries signed after the Yom Kippur War.The IAF, according to foreign reports, with both fighter jets and unmanned aerial vehicles, has been flying in Syrian airspace in order to gather intelligence. On more than 10 occasions, the air force attacked Syrian Army targets, including some on the outskirts of Damascus: warehouses, factories and convoys bringing advanced weaponry – precision surface- to-surface missiles, anti-aircraft missiles, and radar and anti-ship missiles – to Hezbollah in Lebanon. In the face of all of these attacks, Assad’s army swallowed its pride and did not respond.The Syrian Army did not respond either when Israel shot down a Syrian Sukhoi warplane that neared its border a few years ago.Israel also attacked on several other occasions, according to foreign reports, including assassinations by air strike of senior Hezbollah officials (among them the January 2015 strike that killed Jihad Moughniyeh, the son of former Hezbollah “defense minister” Imad Moughniyeh, and later, arch-terrorist Samir Kuntar in his safe-house in the Damascus suburbs), as well as an Iranian Revolutionary Guard general. This came amid attempts by Hezbollah and the Iranian Revolutionary Guard’s Quds Force commander, General Qassem Suleimani, to establish a military infrastructure in the Golan Heights – with Assad’s knowledge – to launch attacks against Israel. These alleged Israeli attacks thwarted this plan by the Hezbollah- Iran-Syria axis.In addition, the IDF also responded with artillery fire, rockets and symbolic air strikes against Syrian Army outposts almost every time that errant shells from the fighting between the Syrian Army and rebel groups near the border “spilled over” and landed in Israeli territory.The IDF’s responses were measured, and were mainly intended to send a message to the regime – the IDF said so expressly in its statements – that no matter what the source of the errant fire was, whether it came from the Syrian Army or the rebels, Israel sees the Assad regime as responsible and the sovereign power in charge of its territory.Until last night’s events, the Syrian Army did not respond.In the most recent episode, it responded forcefully, backed up by an official statement in which it took responsibility.However, the IDF denied the Syrian Army spokesman’s claim that the missiles downed an Israeli warplane and drone, and said that the missiles had not even come close to the IAF aircraft.But it is clear that the missiles were intended to send a signal to Israel that this was not accidental fire ordered by a junior commander in charge of an anti-aircraft battery, but rather, the result of orders from the senior command.The incident bears witness to the growing confidence of Assad’s army, which is succeeding – for the most part because of Russian help – to expand its control in Syria (which is still only some 30 percent of the territory), and to cement the regime’s place as the opposition weakens and ISIS is at the beginning of the end.As the regime’s army intensifies its assault on the rebels, including in the Golan Heights not far from Israel’s border, the chances for more errant shells landing in Israeli territory increase. Two additional shells fell on Tuesday afternoon.The IDF is expected to respond, likely with increasing levels of force. If Assad’s army decides to retaliate like it did last night, the chances for an escalation of tensions and descent into violence on what has until now been a relatively quiet Golan Heights border also increase, despite the fact that most of the sides involved – Israel, the Assad regime, Russia, and some of the rebel groups – have no interest in heating up the border and sparking a military conflict.