Hamas seeks to start a new intifada and use it to burn Israel – and the Palestinian Authority. 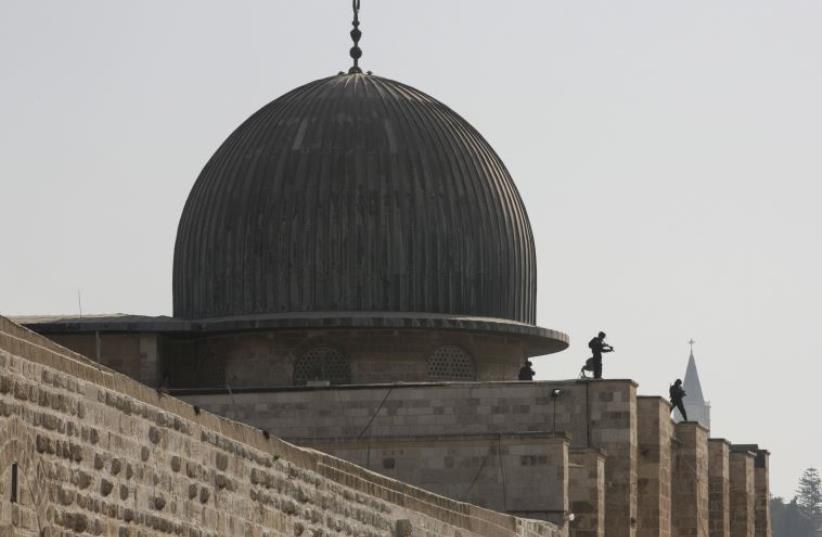 Israeli police officers take positions on the roof of the al-Aksa mosque during clashes with Palestinians in Jerusalem's Old City
(photo credit: REUTERS)
Advertisement
Despite the considerable efforts made by security forces in recent weeks to prevent a surge of Palestinian terrorism during the High Holy Days, an east Jerusalem gunman succeeded in obtaining an automatic firearm and going on a murderous shooting spree in the capital, gunning down a woman and a policeman before being killed in return fire.The terrorist took advantage of the ease of movement east Jerusalem residents, who hold Israeli residency, have, as well as the disturbing ease with which firearms can be bought in east Jerusalem.The latest jihadist rampage on Jerusalem’s streets will serve Hamas’s goal of igniting a wave of violence among Palestinians in the West Bank and east Jerusalem.The Aksa Mosque compound plays a key role in this recruitment and call to violence.Hamas seeks to start a new intifada and use it to burn Israel – and the Palestinian Authority, which it wishes to topple and replace.Hamas leaders believe they can do this while maintaining the truce in their home turf of Gaza, where they use the calm to rebuild rockets and dig tunnels.In a videotaped message, the terrorist behind Sunday’s attack said his actions were designed to “safeguard Al-Aksa Mosque,” vowing that Jerusalem would be “liberated from their [ Jews’] contamination.”This rhetoric is a reflection of the ongoing incitement on Palestinian social media and established Palestinian media channels, aimed at promoting the popular Palestinian conspiracy that Israel plots to harm Al-Aksa.Such incitement to violence traditionally surges during Jewish holiday periods, and security forces have in recent weeks stepped up counterterrorism raids on the homes of suspects, on gun manufacturing workshops and on weapons dealers in the West Bank and east Jerusalem.The footage left behind by the terrorist was aired by Hamas’s mouthpiece, the Al-Quds satellite television station, and Hamas members in Gaza, quick to try and claim responsibility, said the attacker was one of their own.The Shin Bet (Israel Security Agency) will now be seeking to ascertain whether the attacker did in fact have organizational ties to Hamas, and whether he received any assistance in the attack.Alternatively, he may have acted without any organizational assistance, becoming the latest domino in a chain of deadly lone terrorists.Either way, Hamas’s efforts at pyromania are set to continue, and Israel will have to brace for further attacks by loners or small cells that answer the call to kill.The threat of small numbers of attackers is always the most difficult for intelligence agencies to detect and preempt, and if more attacks occur, the defense establishment can be expected to initiate larger countermeasures to make up for the lack of intelligence.All sides seem to be aware of the possibility that a fire started in east Jerusalem or the West Bank can easily spread to Gaza.