The war of words between Prime Minister Benjamin Netanyahu and Palestinian Authority President Mahmoud Abbas seems carved in stone, particularly when playing to their home court. 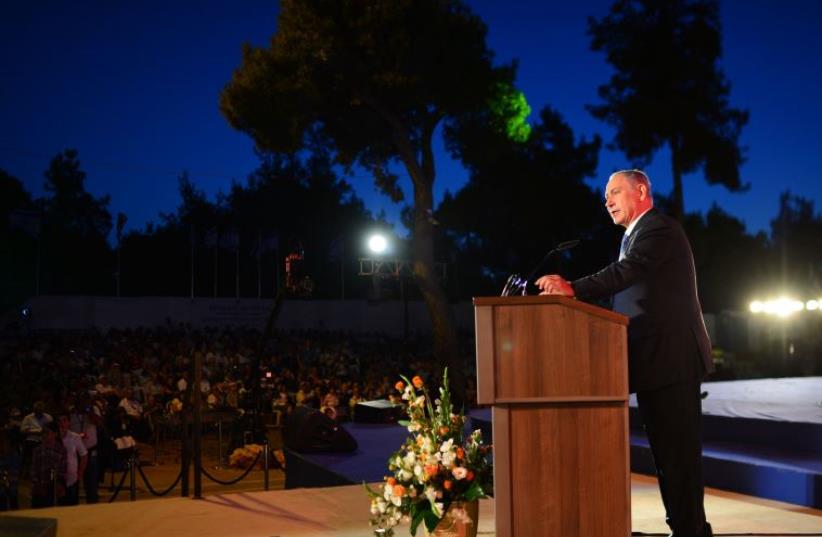 Netanyahu speaks at Ammunition Hill on Jerusalem Day
(photo credit: KOBI GIDEON/GPO)
Advertisement
It’s hard to hear the peace bells ring when listening to either the Israeli or the Palestinian leader.The lion might lie down with the lamb in Washington, Paris or Cairo. But the war of words between Prime Minister Benjamin Netanyahu and Palestinian Authority President Mahmoud Abbas seems carved in stone, particularly when playing to their home court.No peace climate has yet been created to budge these two leaders from a set of terms the other finds unacceptable. It is for this reason many have abandoned any hope of a resolution.Education Minister and Bayit Yehudi head Naftali Bennett noted the obvious on Sunday night when he said, “you can’t be for the Land of Israel in Hebrew and create a Palestinian state in English.”But that hasn’t stopped Netanyahu from doing precisely that. In this, he is no different than Abbas, who in Cairo last month easily dismissed some of the basic Israeli foundations for any peace deal, including recognition of Israel as the national homeland for the Jews.Abbas also continued to call for a two-state solution at the pre-1967 lines, a move which Israel considers suicidal from a security, historical and religious perspective.This would include, of course, Jerusalem’s Old City, including the Temple Mount and its Western Wall. “We will never abandon the kotel [Western Wall],” Netanyahu pledged on Sunday.It’s presumed that these, the holiest sites in Judaism, would be part of Israel in any peace deal, even though the third holiest Islamic site, the Al-Haram Al Sharif compound with its Al-Aksa Mosque and the Dome of the Rock are located on the same site. But while right-wing lawmakers, chief among them Netanyahu, insist that all of Jerusalem will remain under Israel sovereignty, it is hard to imagine a two-state solution the Palestinians would accept that does not include at least a division of the city along the lines of already existing Jewish and Arab neighborhoods.But no right-wing politician can say that, and even centrist left-wing ones are hesitant.The words of the biblical line run deep in Israeli politics, “if I forget thee O’Jerusalem, let my right hand forget her cunning. If I forget thee, let my tongue cleave to the roof of my mouth.”That is most true on Jerusalem Day, which marks that moment when for the first time in over 2,000 years — it was no longer a prayer or a dream — the site of Israel’s ancient Temple was once again in Jewish hands.President Reuven Rivlin, who often explains that he is of the eighth generation in his family to live in Jerusalem, recalled the miracle of that day, 49-years ago. As an intelligence officer in the Jerusalem Brigade, he was one of the soldiers who “liberated” the city. “I remember the emotion which washed over us all at the moment we reached the Western Wall. I remember how we were overcome with tears. There, even those who did not want to, cried,” Rivlin said as he spoke at a special Jerusalem Day ceremony on Ammunition Hill.It would be a mistake to judge either Abbas or Netanyahu as men of peace or war based on the degree to which they hold fast to principles dear to their own hearts and those of the people whom they lead.“Love for Jerusalem is what binds us together,” Netanyahu said of his country’s capital when he spoke at Ammunition Hill and later at Mercaz HaRav.He recalled the bitter way it was divided from 1948 to 1967, when half of the city was under Jordanian rule. Barbed-wire walls ran through it, with snipers' shots and a minefield littering abandoned areas.“I remember the tremendous excitement that gripped me,” after the victory of the Six-Day War, “when we streamed to the Wall to touch the stones,” Netanyahu said.There is a complexity to emotion and it is possible to sanctify both religious history and peace, even if the two do not sit so easily together.A two-state solution would undoubtedly be closer had Netanyahu stood on Jerusalem Day and spoke of the city as the eternal capital of two people.But in the strange universe of Middle East politics, where words often fall like large raindrops that immediately dry out in the hot sun, it is also possible to speak of a united Jerusalem and simultaneously engage in talks of a “bold step” not yet defined, but only imagined.