When the distance between a Jewish neighborhood and a Palestinian area is just a matter of a few meters, only a fence or a wall could provide security. 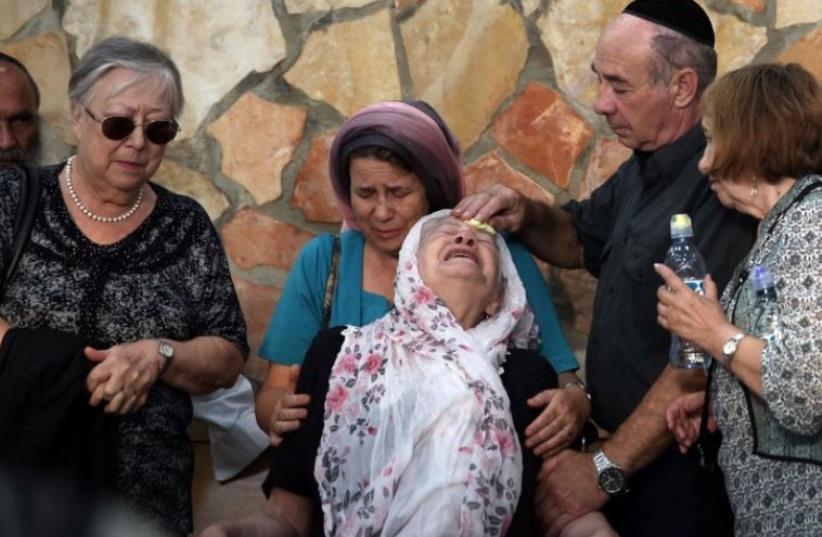 The mother of 51-year-old Israeli Alon Guverg, who was killed a day earlier when Palestinian attackers shot at a bus, mourns during his funeral procession in Jerusalem
(photo credit: AFP PHOTO)
Advertisement
The final vestiges of the "united Jerusalem" delusion are fading away. Jerusalem has become the focal point of the latest wave of terrorism, and the lack of separation between the Israeli and Palestinian populations in the capital will continue to make it easier for the next crop of terrorists. Since Thursday, the police have instituted a kind of closure on the Arab neighborhoods in east Jerusalem. Those who remember the second intifada, however, know very well that closures are simply insufficient without a physical barrier in place. Those who are not involved in violence will simply pass through checkpoints, while the terrorists can simply choose the countless number of ways to sneak into the western part of the city.Yes, it's true - 99 percent of the Palestinian population is not participating in the current round of fighting. All that are needed, however, are a few dozens of assailants to destroy the last remnants of the illusion of co-existence. Earlier this week, we saw an employee of the Bezeq phone company attack innocent Jews. We also saw a terrorist carry out an attack, even though he was an employee of the Beit Loewenstein rehabilitation hospital in Ra'anana.The tens of thousands of east Jerusalemites who will commute to work in Israeli hospital, pharmacies, and construction sites will be met with suspicious gazes from their colleagues. Their bosses will wonder whether it is worth the security risk to keep them in their employ. When the Israeli government drew up the municipal boundaries of Jerusalem after the 1967 war - and after the construction of the separation fence 10 years ago - it essentially annexed a quarter of a million Palestinians, granting them the status of permanent residents. Today, east Jerusalemites make up one-fifth of the Muslim population of Israel even though they do not identify emotionally with the Jewish state. Israel could place police officers wherever needed. It could erect concrete barricades and checkpoints at the entry points to every Palestinian village in Jerusalem. But when the distance between a Jewish neighborhood and a Palestinian area is just a matter of a few meters, only a fence or a wall could provide security.There is no chance that a government headed by Benjamin Netanyahu would dare place a physical barrier in Jerusalem that would effectively divide the city, which means that the Palestinian knife-wielding assailants could continue to wander around the city as freely as they wish. Nonetheless, it is strange that this government, with all its bluster and bravado, doesn't adopt tougher measures to serve as a deterrent. The demolition of homes, which is carried out after a long, drawn-out legal process that could take up to 18 months, loses its effect. Home demolitions on their own, however, is not enough. Israel needs to punish the families of terrorists, even if it means expelling them to the Gaza Strip. Every terrorist should know that the moment he brandishes a knife, he is condemning his family to a life of misery.What is being referred to here as a "wave of terrorism" (a more fitting name has yet to be agreed upon) will apparently continue into the foreseeable future. It's important to keep Hamas in Gaza, the armed rejectionist groups in Judea and Samaria, and the Arabs of Israel out of this current round of clashes. Israel should instead focus on the heart of the problem, which is Jerusalem. There are no absolute solutions. It is quite obvious that a better diplomatic atmosphere would calm tensions on the ground, but it is simply impossible to create such an atmosphere given the current Israeli and Palestinian leadership. That is why Israel must continue to fight this form of terrorism with whatever means are available with the understanding that it will not go away anytime soon.The writer is Channel 10's chief military correspondent.